Springfield gets its first road win … at home 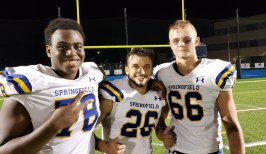 Springfield stalwarts (left to right) Brian Layton, Zack Tropiano and Ethan Johnson show off their visiting uniforms Friday night after a victory over Radnor ... at Springfield.

SPRINGFIELD — It was different playing a scheduled road game at home, but Springfield wasn’t about to apologize for securing its first triumph of the season in the visiting white uniforms.

The Cougars got into the end zone on several big plays Friday night, Zach Tropiano tallying twice to record a 23-14 Central League victory over Radnor, which technically was the home team but was playing here because Prevost Field is under construction.

Home or away, it starts up front for the Cougars, who gave more than they got.

“Their line is big and strong, but the O-line stepped up and we got our blocks right and our pass blocking was great,” said senior Ethan Johnson, who plays both ways up front for the Cougars. “Our backs were able to get going and move the ball down the field and we all did the grunt work to give Jake Rama time. We really needed the momentum swing after last week. This was huge for us.”

Last week the Cougars were on the wrong end of a heartbreaking, 33-28 decision at Ridley. This week they got to work early, taking a 16-0 lead into the intermission.

Tropiano got the Cougars (2-2, 2-1) on the board with a five-yard score on a lateral from Rama, who laid the ball in perfectly. Then Tropiano made it two scores with another lateral late in the fourth quarter after Radnor (1-3, 1-3) put its first points on the board with a nine-yard run by Dante Hopson.

Tropiano’s first touchdown was set up by Dickinson’s 37-yard punt return, among other special teams plays by the Cougars. Kicker Coary Luke drilled a 35-yard field goal and hit a couple of solid directional kickoffs.

While Radnor did a good job of limiting the Cougars’ run game, it had no answer for Rama’s play action fakes and throws to Longo, who has serious run-after-the-catch skills. Longo scored on a 68-yard slant in the second quarter and set up Tropiano’s insurance TD with a 51-yard reception.

“I think we played well early,” Cougars coach Chris Britton said. “I think we just have to wait and find our stride because in other games we made mistakes early and had to catch up. We just have to find our way. We have a lot of kids moving around at different positions and we’re just trying to shore things up.”

Radnor didn’t go quietly. The Raptors’ defense stopped the Cougars at the 4-yard line in the second half, enabling quarterback Jude Walling to get into a rhythm with Tommy Deshan, who had three catches of 22 or more yards to go with a three-yard TD grab.

Radnor coach Tom Ryan applauded the effort of linebacker Damian Falcone, a four-year starter at linebacker along with Quinn Ressler and the defensive line for helping the squad hang around.

“We just made some mistakes in all three phases of the game,” Ryan said. “But I told them I was proud of their effort. I never ever question our team’s effort. You know that with Coach Britton, his guys are coached up really well and I knew this was going to be a dogfight one way or the other. Unfortunately, we came out at the other end this year. I always love playing Springfield. Our staffs all get along. Unfortunately, somebody had to lose.”

The Cougar defense led by Brian Layton and Johnson had a lot to do with the victory. They got five sacks of Wallin in the first half.

“We just wanted to shut them down quick and early, get our offense on the field as quick as possible,” Layton said. “We just sent as much pressure as possible. We were coming off the edge, coming up the middle and just shutting them down. This is a big win. This is huge for us.”

The lack of a home field obviously isn’t helping Radnor. All Ryan and his players can do is take care of what they can control – and cross their fingers the field is done before the end of the season.

“Our kids haven’t complained about it,” Ryan said. “We’re on a grass practice field and it’s unfortunate for the seniors but the younger guys are going to have a beautiful stadium next year. You can’t control construction and the guys are doing the best they can.”