Defense steps up as Cardinal O’Hara shuts down Archbishop Carroll 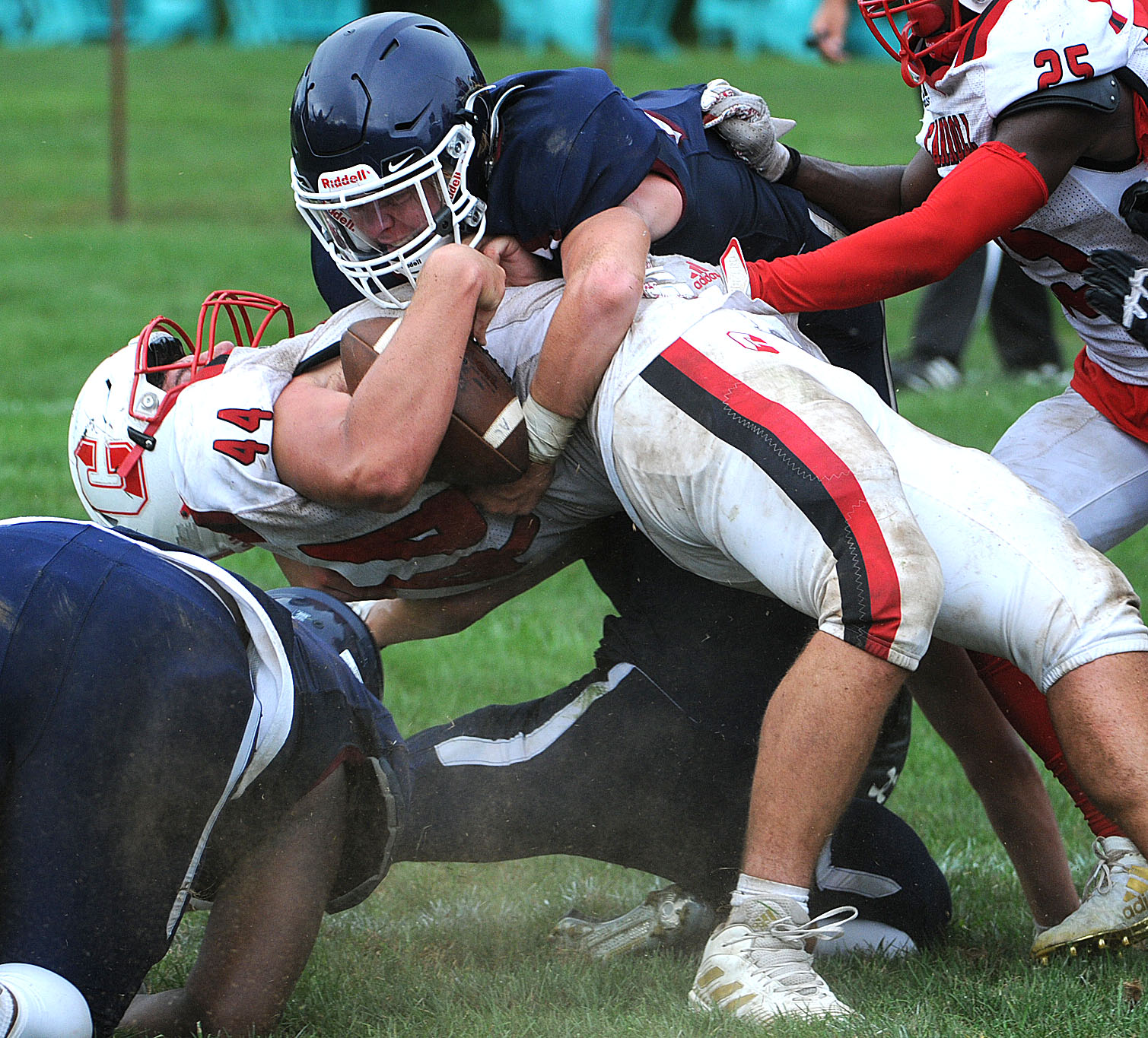 Archbishop Carroll's Anthony Spurio is stopped by a host of Cardinal O'Hara defenders just short of the goal line in the second half. The Lions went on to 17-7 win for their first victory of the season. (Pete Bannan/MediaNews Group)

RADNOR — Edmund Wisseh was reminded by his coaches over the course of Cardinal O’Hara’s 17-7 victory over Archbishop Carroll that he needed to get off his blocks sooner and take better angles to the ball carrier.

All the hollering did was motivate Wisseh, who caused havoc Thursday at John McNichol Stadium.

Wisseh, a junior defensive end, and the Lions were licking their wounds after a blowout loss to Father Judge two weeks ago. O’Hara coach BJ Hogan scheduled a bye week between the Judge and Carroll games for good reason: The Lions focused on cleaning up their multitude of Week 1 mistakes.

During the two-week respite, Hogan made significant changes on the defensive side of the ball. By Thursday, O’Hara’s new-look defense was more confident and, most importantly, more effective as a whole.

Wisseh led the charge with his relentless pursuit of the backfield. He racked up several tackles for a loss, including a couple of sacks of Carroll quarterback Andre Groce. Senior linebacker and vocal leader Mark Zecca also made his presence felt as the Lions limited Carroll’s run offense to negative-36 yards.

Although Groce completed 12 of 22 passes for 147 yards, overall it a good day for O’Hara’s defense, which accrued 11 TFLs and forced Carroll to fumble four times.

“It felt really good because, since we’ve been on the bye week, I’ve been watching a lot of film,” Wisseh said. “I think we were really prepared. We saw them come out with certain personnel and we already knew what was going on, what plays they were going to run. And that gave us the extra push.”

Hogan, who is never completely satisfied after a win, was generally pleased with his front seven’s performance.

“I thought we played well defensively,” he said. “Even when we turned the ball over (two interceptions), at least it was near midfield, so we didn’t lose the field-position battle too much. We made a bunch of personnel changes and we changed our defense up completely from what we were in against Father Judge. Trying to get our kids lined up faster and just allow them to make plays. I thought our kids played fast and they did what they had to on defense, except for that one drive.”

Carroll (0-4) scored in the waning seconds of the third quarter to make things interesting. Facing a third-and-goal at the 16-yard line, the Lions pressured Groce, who made a beautiful throw to wide receiver Jesse Ventre, sliding into the end zone for six.

If there was one player who gave O’Hara’s defense fits, it was the sure-handed, fleet-footed Ventre, who hauled in nine catches for 108 yards.

“The guys up front, they did a great job penetrating. We didn’t have that in the Father Judge game, so we moved guys around. They could have done a better job with angles and different things, but they had a bunch of negative plays so I was pretty pleased with them overall.”

Zecca knew the defense was ready to redeem itself Thursday, but it wasn’t going to come easy against Carroll’s big offensive line and skill players.

“I think we had a chance, but you always have to come out and play,” he said. “Wiss and the guys up front did a heck of a job and made everything easier from me and all the other linebackers and outside guys as well.”

After a first quarter that could only be described as hideous, the Lions pounced on a Carroll fumble at the line of scrimmage early in the second period, handing the offense excellent field position. On the next play, quarterback Jake Carbin (5-for-12, 82 yards) connected with wide receiver Frank DiDio on a 58-yard pass-and-catch for a touchdown to put O’Hara up 7-0.

The score remained that way until the third quarter, when running back Danny McPhillips ran the ball on four consecutive plays. He ripped off a 42-yard run to set up a four-yard jaunt to the end zone to give O’Hara a 14-0 bulge.

After Ventre’s touchdown catch, the Lions dipped in their bag of tricks. On fourth down, Jason Fiscaro took a direct snap in punt formation and scampered 24 yards for a first down. The gutsy call paved the way for some much-needed insurance points. Jack McKinney drilled a 30-yard field to make it 17-7 with 5:49 to play.

“I feel really good about our defense,” Zecca said. “We had to help out our defense today and I’m sure there may be times where the offense has to help us out. All in all, we played great today, and I’m really excited because I think we still have a lot to improve on. If we play as well as we did today, I think we could be a very legit defense.”

Carter, La Salle too much for Haverford School
Offense comes to life as Radnor field hockey gets first win