Mercury Football Preview: Plenty of history between Pottsgrove and Boyertown 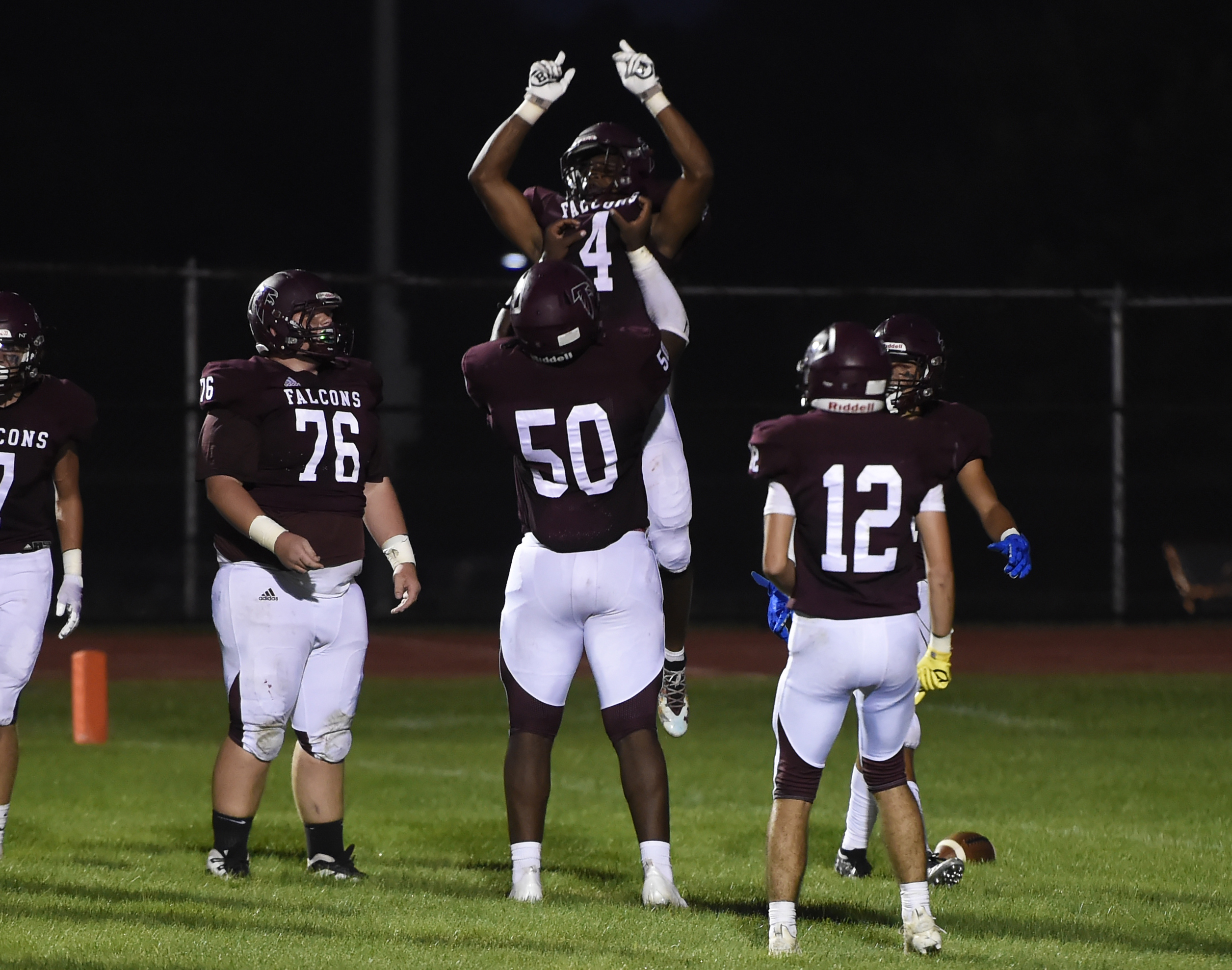 Pottsgrove and Boyertown have seen quite a bit of each other over the course of the last six decades.

The two schools, separated by a little more than six miles, will play their 40th game in the last 56 seasons on Friday night at Pennypacker Field.

Falcons coach Bill Hawthorne said the two teams scrimmaged when he was at Pottsgrove from 1989-92 so the unofficial number is even larger.

Friday’s contest between the Falcons and Bears is one of two Pioneer Athletic Conference crossover contests to conclude the non-league schedule — Methacton at Pottstown is the other — before PAC divisional play begins next week.

It’s a tradition both programs have been happy to uphold over the past several seasons before their entry into conference play.

“You’ve got two veer option teams who are neighborhood rivals,” Hawthorne said. “It’s a healthy, intense rivalry but respectful at the same time. What else would you want to see on a Friday night?”

The two schools have kept alive the rivalry with non-conference games in each of the past five years, including the season finale in last year’s shortened season. The Falcons are one of two PAC Frontier rivals the Bears kept on their schedule along with Upper Perkiomen, who Boyertown took down in its opener this season.

Boyertown won last year’s meeting against the Falcons, 20-9, snapping a nine-game skid to Pottsgrove. Prior to that, the Bears’ last victory over the Falcons came in 2010. Despite the more recent success of Pottsgrove, Boyertown’s 2020 victory gave it a 20-19-1 advantage in the all-time series.

“The kids have grown up playing against each other, and I think our kids get excited for that,” Boyertown coach T.J. Miller said. “I think the kids also like the opportunity that even though it’s an away game, it’s not far for our people, our crowd to travel.”

Boyertown quarterback Anthony Panarello (12) rushes to the outside as Upper Perkiomen’s Damon Faraco closes in during their game on Aug. 27. (Austin Hertzog – MNG)

After a 35-12 win against Upper Perkiomen in Week 1, Boyertown has dropped its last two contests to District 3 powers Exeter (56-8) and Wyomissing (35-7). Miller was proud of the character his team displayed against two squads who thinks have a chance to play deep into the postseason.

Pottsgrove is out to roaring start after having its season opener against West Catholic suspended then ultimately cancelled due to a COVID-19 issue with the Burrs. The Falcons defeated Lansdale Catholic, 39-14, before last week’s shutout win against Schuylkill Valley, 35-0.

The Falcons know the results of the Bears’ last two contests aren’t indicative of what they will bring to the table Friday. Hawthorne noted the Bears are strong on both their lines and skill positions.

“Every time you play Boyertown, you know you’re going to have a physical game,” Hawthorne said. “They’re just going to make you better. This game helps prepare us (for conference play).”

Pottsgrove senior quarterback Ryan Sisko has been lauded by Hawthorne throughout the preseason and into the start of the 2021 campaign. He is an efficient 9-for-15 for 180 yards and three touchdowns in two games. Boyertown junior quarterback Anthony Panarello is 7-for-18 for 157 yards and a two touchdowns compared to two interceptions in three starts for the Bears. He also has 26 rushing attempts for 102 yards and two scores.

Boyertown senior running back Leo Egbe currently ranks sixth in the PAC with 273 yards rushing on 48 carries with three touchdowns. Roman Marinello is another threat on the ground (98 yards, TD) and through the air (6 rec, 39 yards).

“The way that we’re approaching it is is we’re getting ready to play a football game against a really disciplined team,” Miller said.

Senior Luke Ordway, another one of the Bears’ top pass target and defensive lineman, and sophomore Jason Oakes are two more Boyertown players the Falcons will have to keep an eye on. Tyler Kaufman, Riley Delp and Vinny Scarnato are Pottsgrove’s top pass catchers thus far.

Miller also made mention of Falcons’ senior linebacker Shane Caffrey and the Pottsgrove secondary, which has interceptions from Sisko, Gabe Rinda and Trenton Allen.

There hasn’t been a one-possesion game in the Boyertown-Pottsgrove series since 2015, when Pottsgrove won 28-27, but Friday’s contest is shaping up for a good one in the 40th go around between the Falcons and Bears.

Last week’s game: The Blues were blanked by Germantown Academy in their 2021 season opener, 12-0. The Churchmen won last weekend’s pairing with Roman Catholic, 34-26.
Preview: Hill School hosts a rare Friday game looking to get the first win for new head coach Orlando Patterson. Quarterback Hayden Fruhling ran for 60 yards, Anthony Wise for 48 yards and Kayden White for 33 for the Rams in their opener.
Episcopal Ac. (2-0) used a 10-6 edge in second-half scoring to pull away from the Cahillites, who closed the early 14-0 deficit with 20 second-quarter points. It came into the season with a senior, Jake Fant, at quarterback and a trio of classmates, Neo Vonssschulte, Bryce Cooper and Jake Jaszcz as wideouts.

Last week’s game: Boone got into the 2021 win column by handling Garden Spot, 45-17. Conestoga Valley was shut out by Lampeter-Strasburg 19-0.
Last meeting: The Blazers closed out their 2020 schedule with a 21-7 loss to the Buckskins.
Preview: Daniel Boone (1-2) Dean Rotter (13-for-16, 252 yards) threw four touchdown passes — two of them, to Cameron Hirschman, covered more than 100 yards — and J.T. Hogan went on a 55-yard TD jaunt late in the first quarter to help the Blazers open a 38-10 halftime advantage. A.J. Hofer rushed for 119 yards and scored a ground TD in the fourth quarter to close out Boone’s offensive surge.
The Buckskins are 1-2 on the season. Their lone win was against Garden Spot Sept. 3, by a 38-23 margin.

Last week’s game: The Vikings hammered Downingtown West, 55-20. The Barons romped over Susquehanna Township, 60-0.
Last meeting: The Vikings have not played Manheim Central in more than a decade.
Preview: It was hard to identify an offensive standout for the Vikings last weekend. Senior quarterback Ethan Kohler passed for three scores and ran for another, and he had plenty of help from a supporting cast of junior receiver Mike Poruban (two TD grabs), senior fullback Andrew Beck’s tough inside running and junior receiver Owen Peterlin establishing himself as a red-zone target. Junior Bradley Curci got in on the act late with the evening’s most explosive play, a 60-yard TD run.
Junior Ryan Klimek who stole the show, continuing to establish himself as one of the area’s most versatile weapons with 93 yards rushing and three scores, four catches for 55 yards and seven PATs converted.
The Barons (3-0) have been juggernauts both on the offensive and defensive sides. They scored 109 points in their previous outings — an average of 36.3 points per game — while giving up just seven.

Last week’s game: Norristown fell to Plymouth-Whitemarsh, 49-8. Cheltenham was blanked by Archbishop Wood, 46-0.
Last meeting: The Eagles were handled by the Panthers in 2019, 48-14.
Preview: Norristown Nate Robinson 6 pass from John DiNolfi, last scoring drive of game for either team. Kaden Cruz 97 yards on 20 totes,
Cheltenham is 0-3 on the season, outscored in its previous games by a combined margin of 103-21.

Last week’s game: Phoenixville was nipped by Upper Moreland, 21-19. Octorara dominated Pottstown, 55-13.
Last meeting: The Phantoms have not played the Braves in more than a decade.
Preview: Ty Romance tossed a 10-yard touchdown pass to Owen Koch with 31 seconds left to pull the Phantoms within two. However, Koch was stopped on the ensuing two-point conversion attempt to keep Phoenixville from forcing overtime.
Romance completed 17-of-26 passes for 280 yard and three touchdowns in the loss. Koch ran 17 times for 73 yards and added four catches for 38 yards and a score. Hayden Tenbroeck chipped in six catches for 140 yards.
Octorara (3-0) has outscored its previous opposition by a combined score of 121-29. Against the Trojans, Weston Stoltzfus was 8-for-11 passing for 256 yards and three touchdowns, and Zion Raison scored three times on rushes. Steele Wrigley was Stoltzfus’ favorite target, making three catches for 85 yards and one TD.

Last week’s game: Owen J. Roberts handled Avon Grove, 24-7. Reading High was rolled by Academy Park, 41-6.
Last meeting: The Wildcats met the Red Knights in 2011, winning 23-14.
Preview: The Owen J. Roberts offense put on a classic display of the running game setting up the passing game last Friday night. Quarterback Mike Reed took advantage of the Red Devils’ attention to running back Avrey Grimm to pass for 206 yards and three touchdowns, two of them to Dan Cashman and the other to Hunter Rhoads. Grimm ran for 157 yards and the Wildcats (2-1) blanked the Devils (1-2) until the final second of the contest.
DeShawn Wilson is a multi-talented threat for Reading High (1-2), rushing (134 vs. Lebanon Sept. 3), receiving (2 catches for 82 yards against Lebanon) and defense.

Last week’s game: UP was blanked by Fleetwood, 41-0. Schuylkill Valley was whitewashed by Pottsgrove, 35-0.
Last meeting: The Indians have not played the Panthers in more than a decade.
Preview: Upper Perk (1-2) stayed within reach of the Tigers in the early going, only to see its guests score twice in the fourth to bring the “running clock” into play inside the game’s three-minute mark. Gorje Navarrete was a respectable 10-for-15 in the passing game, picking up 97 yards but victimized by Fleetwood’s Tanner Maddocks for three interceptions.
Schuylkill Valley (0-3) has been outscored by a combined 91-13 thus far. Senior Drew Campbell has been the bright spot for the SV offense, scoring its lone touchdown in a 21-6 Week 2 loss to Elco.

Last week’s game: The Rams were topped by Cumberland Valley, 23-19. The Blue Streaks were edged by Harrisburg, 20-17.
Last meeting: The Rams have not played Manheim Township in more than a decade.
Preview: The Rams were topped by Cumberland Valley, 23-19.
Spring-Ford After seeing their 10-3 halftime lead turn into a 17-16 deficit, Sam Herman’s 35-yard field goal with 2:38 to play put Spring-Ford ahead, 19-17. But the Eagles drove all the way down to the two-yard line, eventually getting the game winning score on the scoop and score.
Along with two Herman field goals, Gage Swanger had a 96-yard kickoff return touchdown and a 65-yard touchdown catch from quarterback Ryan Freed to make up the Rams’ scoring.
Against the Cougars, sophomore Hayden Johnson went 21-for-31 passing for 189 yards and two TDs for the Blue Streaks (1-2), both scores going to senior Anthony Ivey (eight catches, 51 yards). Michael Heckman, another senior, was a principal target with 32 yards on four receptions.

Last week’s game: Season opener for Panthers.
Preview: “The Perkiomen School, and the KSFL as a whole, is very much looking forward to competing again in 2021 after missing last season due to the pandemic,” Perkiomen head coach Casey Perlstine said. “After winning the inaugural league championship in 2019, we are looking to get back to the championship game with a strong supporting cast of new and returning players. Key returning players: Mikey Boyle (11) QB, Leo Yu (12) OG/DT, Cooper Gleeson (11) OG/LB, Drew Malone (12) RB/LB, Brandon Charon (12) WR/CB, Hunter Eschallier (12) WR/CB, Drew Pickett (11) WR/DE. New players to watch: Chris Catania (11) WR/CB, Ethan Sague (12) OG/DE, Will Heridia (11) C/DT.
“I predict our opening game against Delaware County Christian School to be a physical contest. They are going to look to establish the run and get on the edge just like we will. It will likely come down to who can win in the trenches.”