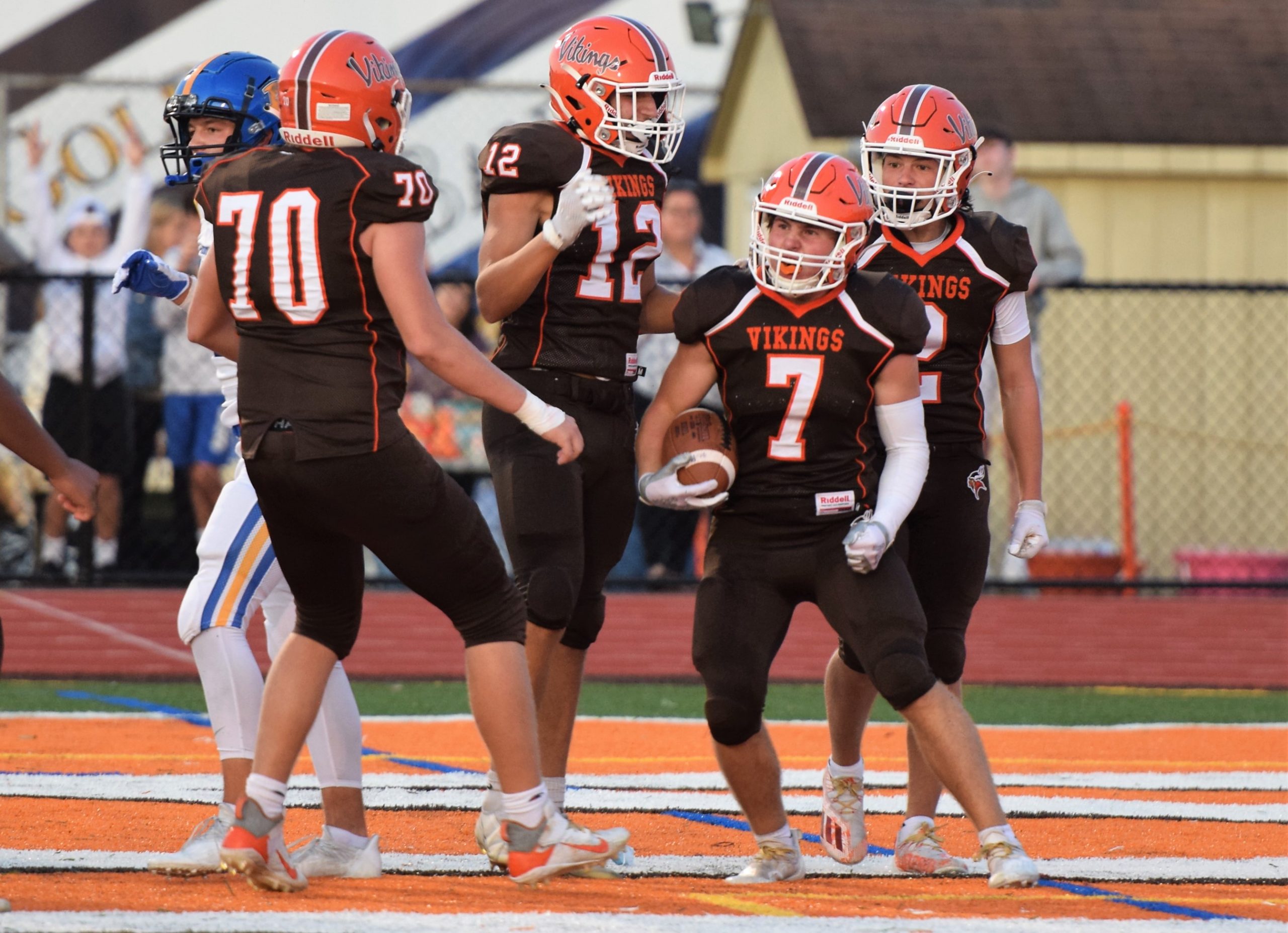 Coming into the 2021 season, Perkiomen Valley’s depth in the backfield was the envy of area football coaches.

Not only did the Vikings have three-year starter Ethan Kohler returning at QB, but their crowded running back room was also loaded with experience. Both of last year’s starters, Leo Hunsberger and Rasheem Grayson returned, while Tyler Marshall and Brad Curci, who’d impressed in spots in 2020 were ready to challenge for greater roles.

But life and football combined to attack the Vikings’ depth, as Hunsberger’s family moved to Delaware over the summer. Not long after, Marshall sustained a season-ending injury in preseason camp.

It opened the door for junior Ryan Klimek, up from JV last year. For the first two weeks, Klimek thrived in the equivalent of the fullback position for the Vikings, but when inured struck Grayson last week, it became clear to coach Rob Heist that Klimek was the guy to take on the tailback job against Downingtown West.

“The first thing I’ll say about Ryan is what a smart kid he is, on and off the field,” said Heist. “Honors, AP student, 4.0 GPA, and on the field, he understands what he needs to do in any position.”

Klimek’s knowledge was topped only by his on-field performance against the Whippets. He carried the ball eleven times for 93 yards and three scores, adding another 55 yards through the air in Perk Valley’s 55-20 win over Downingtown West.

“Probably only four weeks ago, I was just concerned with versatility – being able to play full,” recalled Klimek. “But then Leo left, I moved up a spot and started focusing on fullback.”

He did quite well in that role for the first two weeks, but when Grayson went down, it made sense to move the versatile Klimek to tailback and move Andrew Beck into the fullback role for the Downingtown West game. The move paid off, as Perk Valley’s offensive balance yielded 235 yards on the ground and an eye-popping eight touchdowns on nine possessions in the victory.

“Coach [Chris] Finkbiner, he helped me get there [on Friday],” said Klimek. “He told me Tuesday that I’d need to start learning Rasheem’s spot. He took me aside, worked with me on learning the plays. Some of it comes from my recent experience, but my coaches played the big role in getting me ready.”

Klimek’s versatility doesn’t stop in the backfield. He is 3-of-3 on field goal attempts this year with a long of 41 yards – not that any were necessary on Friday, with the Viking offense operating so efficiently – but he did convert 7/8 PATs and boomed a pair of touchbacks on kickoffs. “That’s huge in high school football, when you can force an opponent to drive 80 yards like that,” said Heist.

Best of all, without a dedicated kicking coach on staff, Klimek was forced to learn kicking… well, certainly not the old-fashioned way.

“I’ve played soccer for a while,” said Klimek, “but then I looked up some YouTube videos on how to kick, and it’s worked. That’s how I got my steps right.”

At 2-1, the Vikings are coming up on arguably their biggest two-game stretch of the season – hosting undefeated Manheim Central of District 3 Friday before welcoming their archrivals from Spring-Ford on September 24. Ryan Klimek knows this is just the beginning, and certainly isn’t resting on his early laurels.

“There’s still plenty for me to improve,” he concluded. “I make mistakes, I can learn more plays – it’s motivation to continue improving.”

Perk Valley’s Klimek wasn’t the only area back to enjoy a breakout night Friday. Pottsgrove junior Amir Brunson made the most of only eight carries, rushing for 128 yards and two scores – one from 64 yards out – to pace the Falcons (2-0) to a 35-0 victory over Schuylkill Valley. Brunson’s ninth touch was the opening kickoff of the second half, which he would carry 86 yards to the house for a third score on the evening. Brunson said the play “set the tone” for the rest of the game, as Schuylkill Valley rarely threatened in the shutout victory.

The Falcons welcome Boyertown next week, and the Bears will have plenty of motivation coming off a second consecutive one-sided loss, this time falling 35-7 to Wyomissing. Boyertown will look to return to the offensive balance that served them well in the opener against Upper Perkiomen, but has been missing in their last two tilts against District 3 powers.

Methacton enjoyed a strong bounce back both from last week’s loss to Plymouth-Whitemarsh during its Friday night contest with Wissahickon, as the Warriors rebounded from an early 14-0 hole to come away with a 35-27 decision and move to 2-1 on the season. Dan Brandi continued to pilot the offense effectively, throwing for two scores and running for another while getting defensive standout Brian Dickey more and more involved on offense, as the senior had both a rushing and receiving score. The Warriors travel to Pottstown next week, where the Trojans (0-3) will be in search of their first victory after a setback against Octorara that saw them shorthanded.

Daniel Boone broke into the win column with authority, thrashing Garden Spot 45-17. Quarterback Dean Rotter found All-Area wideout Alex Vassallo on nine occasions for 98 yards and a score. In his second start since taking over for injured Carter Speyerer, Rotter announced himself a force to be reckoned with as he compiled 256 yards passing and four scores through the air.

Spring-Ford played the foil in one of the most exciting finishes anywhere in the state last weekend. A seesaw contest appeared to bend in the Rams’ favor with about two minutes to play when Sam Herman hit a 35-yard field goal with 2:38 to play to put SF ahead 19-17. But lining up for a game-winning kick of their own, Cumberland Valley found good fortune when a botched hold turned into a mad dash for the goal line, as Griffin Huffman crossed the plane to give Cumberland Valley an improbable 23-19 victory and drop the defending PAC champions to 2-1. Gage Swanger played the standout for the Rams, returning a kickoff 93 yards for a second-quarter score before adding a 65-yard TD reception in the third quarter.

It was a similar story at Pope John Paul II on Saturday, where a back-and-forth tilt ended with the locals on the short end. Springside Chestnut Hill Academy scored the game-winning touchdown with under 30 seconds to play to send the Golden Panthers (2-1) to their first loss of the season. Quarterback DJ Clarke found Josh Little 11 times and connected with Kese Williams on eight occasions in the losing effort. Next week, the Golden Panthers take on Berks Catholic as they continue to challenge themselves before embarking upon Frontier Division play.

Phoenixville almost completed a fourth-quarter comeback when Owen Koch reeled in a 10-yard score with 31 seconds to play at Upper Moreland, but the two-point conversion was thwarted, preserving the Bears’ 21-19 victory and dropping the Phantoms to 0-2. Ty Romance had a big passing day for Phoenixville, completing 18-of-28 passes for 291 yards and three touchdowns, connecting with fellow sophomore Hayden Tenbroeck five times for 157 yards and two scores.

Fleetwood showed the full range of its potent offense in throttling Upper Perk, 41-0.