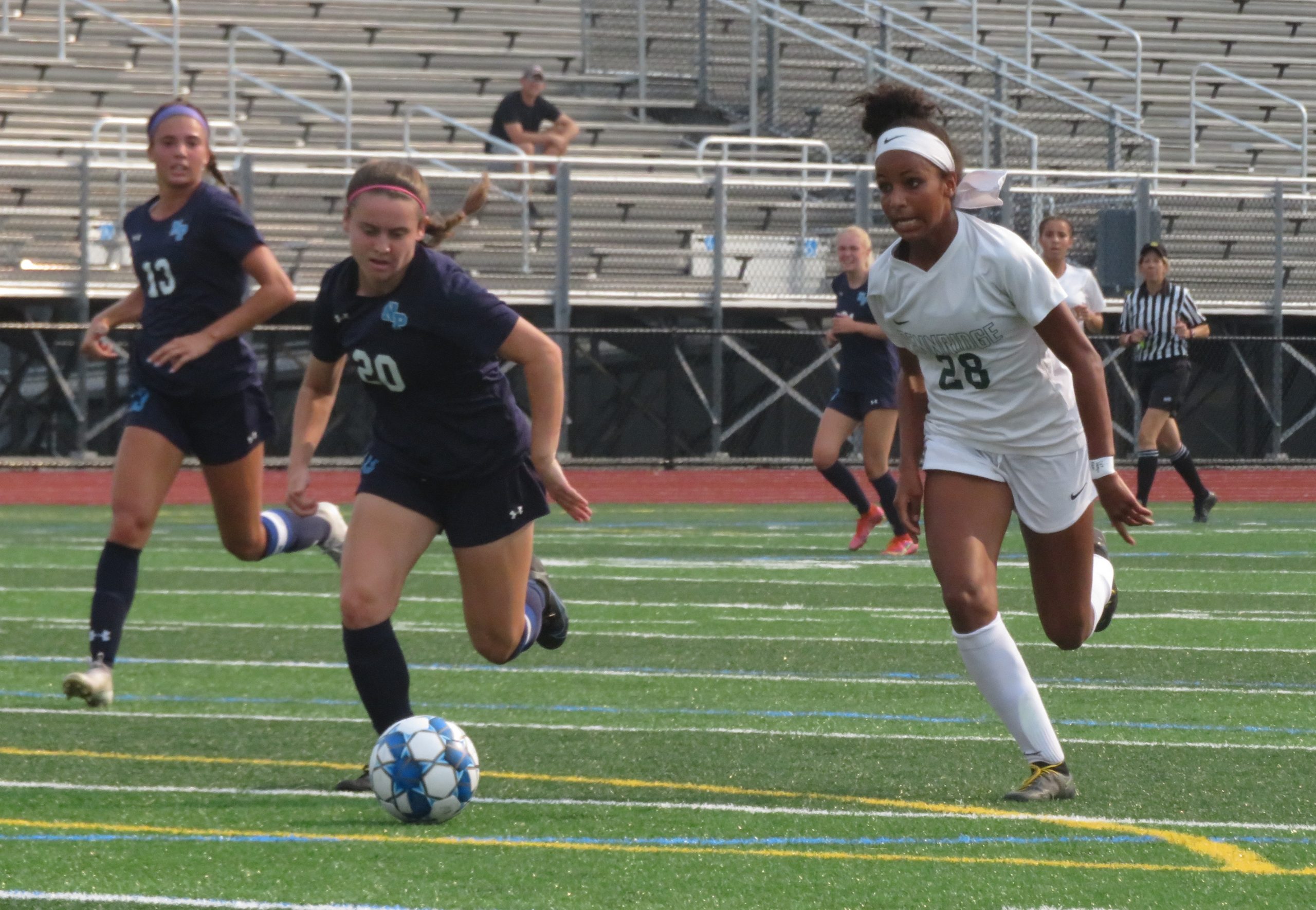 TOWAMENCIN >> Expectations remain high for the Pennridge girls soccer team. But the standard the defending PIAA Class 4A champs expect from themselves may be even higher.

A goal in each half gave the visiting Rams a 2-0 Suburban One League Colonial Division victory over North Penn on a sweltering Tuesday afternoon. But as she left the Crawford Stadium turf, senior Leah Malone shared her side’s feeling that it was a less than satisfactory performance.

“Honestly that was unacceptable from us,” said Malone, “I know we’re capable of so much more than what we just put out here and honestly that’s just not good enough.”

Malone was involved in both goals as the Rams improved to 4-0-0 (2-0-0 division). The High Point commit’s cross found Emily Kriney in front for the opening tally in the seventh minute. The Rams – ranked third in United Soccer Coaches latest fall girls national poll – finally got some more distance from the Knights when Malone struck in the 60th minute off an assist from Liv Grenda.

“We had to do so much more work because of simple mistakes that shouldn’t be happening in games like this,” Malone said. “And we know that going into the rest of our season we got to clean that up because teams are going to make us pay for that if we don’t.”

A strong effort from North Penn goalkeeper Anna Fiore prevented the Rams from a higher goal total while the best scoring opportunity for the Knights (1-2-0, 1-1-0) came with them trailing 1-0 in the first half as Lauren Blanch’s shot hit the crossbar and NP could not knock in the rebound.

“They obviously score a nice goal off the cross there and then we had a chance to pull it back and just missed it, so it’s just the way it goes sometimes, “ North Penn co-head coach Mike Rio said. “Thought it was kind of sloppy in the first half, I was happy with the way we responded, especially at the start of the second half.

“I thought we had some good possessions, good ball movement, got the ball in their defensive third a bit and we were able to create some opportunities and just couldn’t find the back of the net.”

The Rams put a handful of good strikes at the net but most were sent right at Fiore. The senior keeper blocked Tori Angelo’s turnaround shot out for a corner a few minutes after Kriney’s goal and also came off her line to corral a few balls before Pennridge could finish runs.

“She’s been great for us so far at the start of the season,” said Rio of Fiore. “Shot she’s facing, she’s taking care of for the most part. You know, even other things – crosses, things like that she’s not giving up rebounds. Yeah, even on the even things she’s making it look easy which is what you want your goalie to do.

“She’s been a rock for us back there, she’s playing great. Obviously her senior leadership at this point is fantastic.”

Pennridge goalie Sierra Shaeffer was not called on as much as Fiore as the Rams posted their third shutout of 2021 but the senior came through when needed. After Blanch’s shot from the right side of the box hit the crossbar, the ball bounced down to Ella Broadhurst only for Shaeffer to deny the up-close shot and keep the Rams in the lead.

“We talk about that, you don’t know how many chances you’re going to get against a good team as good as them,” Rio said. “When you get them, you got to put them in the back of the net. We got a couple, especially that one in the first half, it just didn’t go.”

“But yeah, they’re great competition, they’re a great measuring stick to kind of see just how you stack up. I was really happy with a lot of what our girls did today and I thought we defended really well for most of the game. I thought we had bits where we were moving the ball forward that we looked really good too so it’s definitely a game that we can build on.”

“We need to expect that teams are going to give us our best game,” Malone said. “And I don’t know what was in everybody’s head but it definitely has to be better than that on all of our parts, myself included.”

Pennridge grabbed the 1-0 lead against the Knights at 33:12 in the first half as Malone tracked down a ball near the end line and put a cross to the front of the goal for Kriney, who used her upper body to direct the ball into the net.

“One of our principals is you make sure you get to that ball,” Malone said. “Even if you don’t know if it’s going out of bounds or not, you make sure you’re going to get there and be positive it’s not going out of bounds. So I was just kind of sticking to that and making sure that I got there – super important because that’s what it leads up to and we are able to capitalize on things like that.”

The Rams doubled their advantage midway through the second half. Grenda sliced through the defense on a run into the box then delivered a pass to Malone, who sent her shot into the right side of the goal at 20:36.

“Being composed in front of the net is something I struggled with so I was happy I was able to put that away,” Malone said. “But she does a great job getting into the box in situations like that so I was proud of her.”