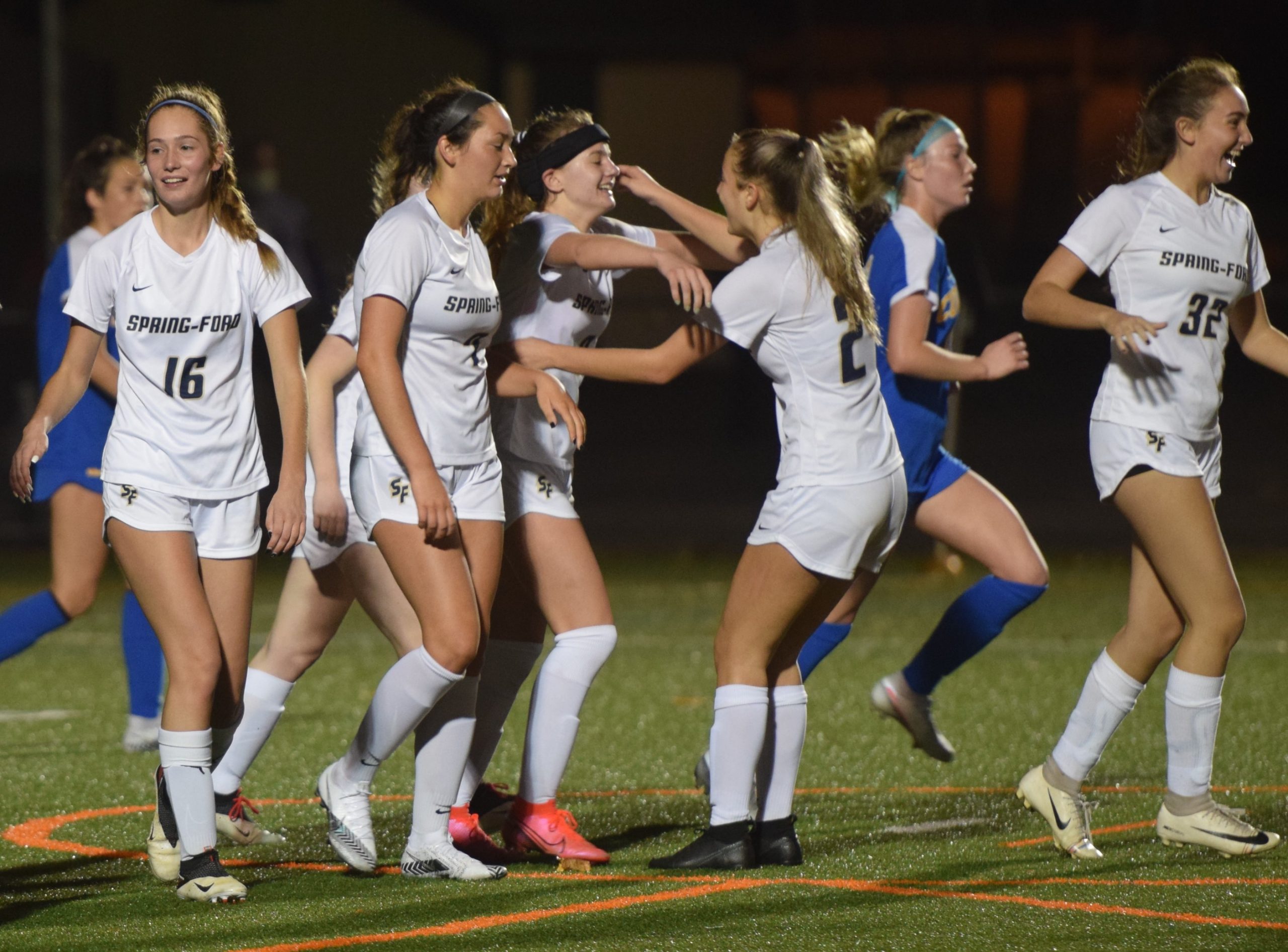 KENNETT SQUARE >> The Kennett High School girls soccer team was doing a yeoman’s job defensively against Downingtown East, holding them scoreless for almost half of the first 40 minutes, but a dam can only hold out for so long under heavy pressure before it breaks.
The Cougars (2-0 Ches-Mont, 2-0-1 overall) had five different as they broke open a close game at halftime to waltz to a 5-0 Ches-Mont League victory over the Blue Demons on a sunny, warm Monday afternoon at Legacy Fields.
“We trying to frustrate them, have them shoot from the outside,” said Kennett coach Tom Cofran. “We kind of wore down, two subs and they’re a very good team. They just wore us down in the second half.”
East’s advantage was immediate and substantial, they held possession for long stretches of time and were able to get a high volume of shots — although not in highly dangerous areas.
The Kennett backline, which included sophomore Molly Sallurday, senior Mary Harper, junior Monse Flores and freshman Charlotte Davies, held the line and thwarted the Cougars.
The breakthrough for East came with 9:40 left in the half, Maddison Shumate found Caroline McDonald with a pass. McDonald, who hit the crossbar early in the half, found some open space and fired from top of the 18-yard box that went past goalkeeper Sawyer Fellows into the net for a 1-0 lead.
“It was a great ball from Madison Shumate”, said McDonald. “I just wanted to make sure to get it on net. We started a little slow and it took a little while to break them down. In the second half, we played much better and started scoring.”
The forays for the Blue Demons into the Cougars’ zone were mostly brief and unproductive, they were outshout by a commanding 19-2 total in the first half. The final total was 37-3 in favor of East.
“They kind of packed it in defesively and kept us to the outside,” said East coach Jason Lezak. “We just wore them down. But, it was a good win. We’re happy to be 2-0-1.”
McDonald almost got a second moments after the break when she stole the ball from a Kennett defender, and quickly fired a shot that hit the underside of the bar and bounced straight down away from the goalline.
The long range shooting kept coming and it paid dividendes at the 32:20 mark. Molly Walsh’s shot from distance hit the ground and skipped past Fellows to make it 2-0.
A little under four minutes later, Brynnley Jefferis scored to make it 3-0. Barley 60 seconds later, Shumate added a long-distance goal of her own to make their advantage, 4-0.
Lauren Reimold capped the scoring a few minutes later.
Kennett will look to bounce back Wednesday on the road at Sun Valley, while Downingtown East will host West Chester East in attempt to keep its unbeaten start going.

Cheltenham does it all in win over Norristown
Column DiGiovanni: Battle of unbeaten