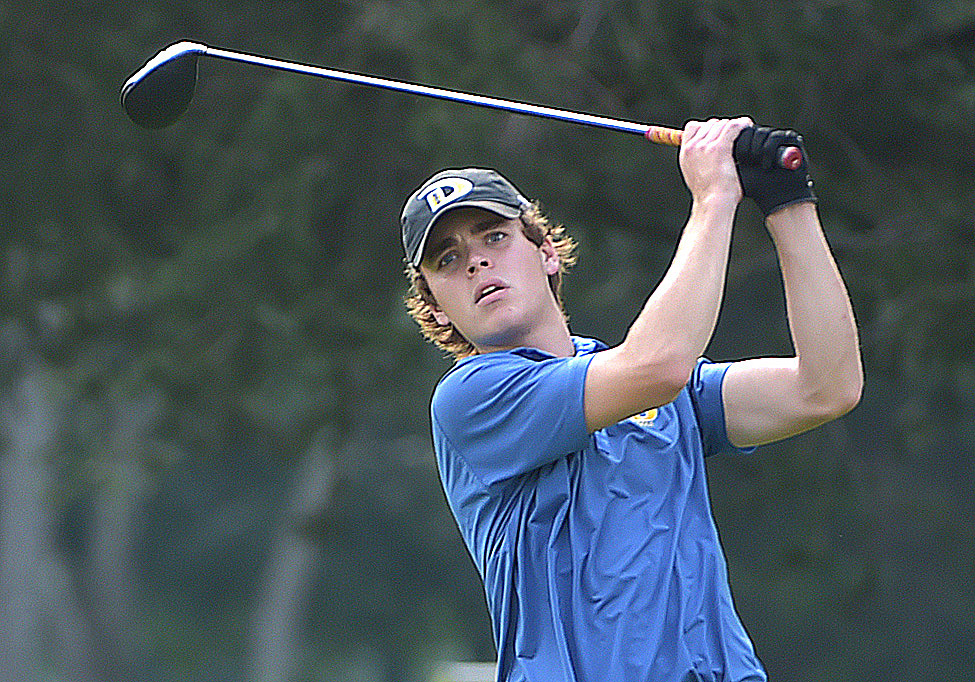 WEST WHITELAND >> The idea that every shot counts has been stressed by every coach for as long as they’ve been playing high school golf, but it’s often dismissed by young, impetuous players.

On Tuesday at Whitford Country Club, the concept took on added meaning when the top five for Downingtown East and visiting West Chester Henderson went shot-for-shot through nine holes and were still deadlocked. The first tiebreaker is each team’s sixth best score, and that was where the Cougars had a two-stroke edge resulting in a 257-259 razor-thin win for East.

“Before the round we had a team huddle and I made sure to tell the guys that every stroke counts. Looking back, that’s what it came down to,” said Cougars’ senior standout Jake Leon.

“I was expecting it to be close, but not this close,” added Warriors’ head coach Joel Cummings. “It comes down to every stroke. The outcome today really exemplifies that.”

It was the season’s second meeting, and the first was also very close (a three stroke Downingtown East victory at West Chester Country Club on Sept. 9). Through nearly 200 competitive holes this season, these two teams are separated by just five strokes.

“When you lose like this, you can’t help but thinking that any of us could have made up those two strokes today,” said Henderson sophomore Josh Baker, who shot a 38, was the only player to break 40, and was the individual medalist.

Leon paced East with a 41, but he suffered back-to-back double bogeys on Nos. 3 (three-putt) and 6 (chunked tee shot into the water). The team captain came back, however, with a two-putt birdie at the 472-yard par-five ninth hole.

“No one played their best today but we somehow came out on top and that’s all that really matters,” he said.

“We played (Monday) at Coatesville (Country Club) and those greens were really slow. Then coming here, they were fast greens, and this was our home opener, so we really haven’t played this course that many times.”

In any contest that is this close, there were many key moments, but none bigger for the Cougars than a par-save by sophomore Rish Jupudi on the ninth hole. Playing in the final group he nearly put his approach shot into the greenside pond but still managed to card a five.

“I kind of knew he was going to shoot low because Rish is normally pretty consistent,” Leon said of his teammate’s 42, which tied the score at 212-212.

“He got it up-and-down while hitting it with one foot in the pond,” Yard added. “If he doesn’t get a par on the last hole, we lose by a shot.”

East dodged the bullet and improves to 6-2 overall, 5-1 in the Ches-Mont. Henderson falls to 4-4.

“I’ve been playing Whitford for 40 years and you have to keep the ball in the fairway, and keep it below the hole,” Yard explained. “On many of these holes, you’re better off 10 yards short of the green than you are five feet behind the hole. We talked about this.

“But the kids today didn’t understand that. Instead of taking their punishment and taking bogey, they try to make an amazing par and end up making a double or triple.”

Baker’s two-over-par 38 included birdies at the third and ninth holes. But the key to his round was his ability to scramble around the greens.

“That is a great score, especially when you see what everybody else did,” Cummings added. “I thought that was going to be the score that won the match.”

Jackson Lucca (42), Chase O’Shea (43) and Colin Drummond (44) did just enough to get the Cougars to 212, but it was junior Johnny Eitzen’s 45 in the sixth slot that ultimately won it for East.

Dylan Kochis and Pat Lyn each carded 42s for the Warriors.

“We haven’t played this course in two years, so a lot of it was new to them,” Cummings said.

Up next for Downingtown East is a rematch against Bishop Shanahan. The Cougars edged the Eagles by a single stroke last month at Downingtown Country Club.

“We will need to play two shots per player better than we did today against Shanahan to have a chance to beat them,” Yard predicted.