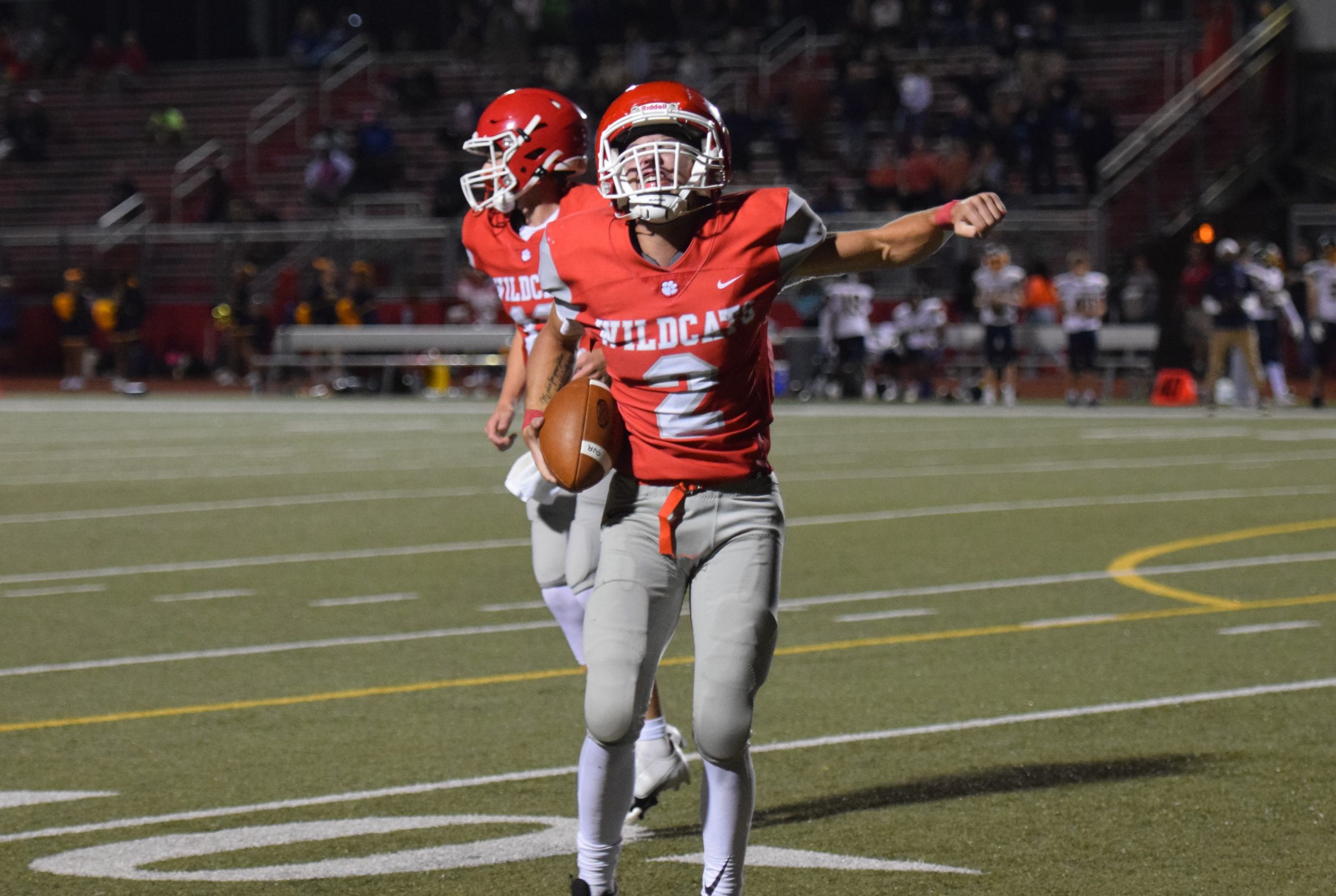 “You’ve got to get bigger.”

Avrey Grimm says he hears that one all the time. At 5-foot-9, 165 pounds, the Owen J. Roberts’ senior running back won’t be confused with Derrick Henry anytime soon.

But the people who can’t get past those numbers miss out on some other figures that are becoming more and more impressive with each week. After a 187-yard, three-score showing in Friday night’s come-from-behind 34-24 victory over Wissahickon, Grimm boasts a gaudy 425 yards and five rushing touchdowns in the early going this season.

It’s an impressive follow-up to an abbreviated (six games) junior season that saw Grimm come from basically out of nowhere to finish second in the PAC in rushing with 661 yards and a 6.8 yards per carry average.

“I used to worry about [size] all the time. I thought I was too small to play at the next level. But last year, my dad told me not to worry about size and just play the game. I know what I can do now.”

Along with multiple PAC rivals, so do Conestoga and Wissahickon, OJR’s first two opponents this season.

Grimm put up an eye-popping 238 yards and two scores – including a 92-yarder on OJR’s first snap of the season against ‘Stoga in week one.

“That was a special moment,” said Grimm. “We ran a jumbo formation, practiced it all week – all I had to do was outrun the safety.”

OJR would drop that contest to the Pioneers, 17-14 in overtime. But the loss would reveal another refreshing aspect of Grimm’s approach to the game: in response to a boastful Twitter message from a Conestoga player, Grimm didn’t snipe back; he instead wished the best: “Hell of a game! Hell of a game! Good luck the rest of the season!!”

“I love the competition, and sure, we talk a lot during the game,” said Grimm. “But it’s all love – they were good guys. I pride myself on being a good sport, and I usually don’t talk much on social media anyway.”

It’s an attitude developed since Grimm was five years old and started playing football. He didn’t play middle school ball with OJR, however, and lost most of his ninth-grade season to an injury. As a sophomore, Grimm saw spot duty and by the end of 2019, had no idea what his future held in terms of playing time.

He didn’t allow COVID-related shutdowns to stop him from working, however.

“I didn’t know if I’d be the starter,” Grimm recalled. “But I’ve worked hard with my trainers and coaches.”

Aside from the Wildcats’ coaching staff, Grimm credits trainers like Kyle Henley and Jason Williams for his development. “With Kyle, we worked on technique, and Jason, we worked on position-specific drills,” summarized Grimm. “Push/pull with the sled, running routes out of the backfield.”

Back to Friday night’s game, Grimm had OJR’s first three scores of the game, the third giving the Wildcats their initial lead at 19-18 before two late interceptions, including a Ned Burgess pick-six, sealed the win. Grimm had a momentary scare, cramping up in the second half – but returned to help OJR close out the victory.

“He makes plays that are not there, all the time,” said Wildcats coach Rich Kolka after the game. “He told me he could go. If he feels he can go, he’ll go. I’ll take a 60 percent effective Grimm over anybody else.”

Ethan Kohler’s 285 yards passing gave Coatesville all they could handle before a strong second half propelled the Red Raiders past Perkiomen Valley, 35-27. The Vikings took a 27-14 advantage into the half, but were controlled by Coatesville the rest of the way. Kohler connected with Dawson Debebe eight times for 181 yards and a pair of scores. Next week, the Vikings another Ches-Mont powerhouse in Downingtown West.

Spring-Ford made it two shutouts in as many games, pummeling District 3’s Chambersburg 48-0. Ryan Freed threw four touchdown passes to highlight an efficient 19-for-25 passing night, but the Rams’ defense shined in holding Chambersburg to 27 yards of total offense and creating three turnovers – two of which were interceptions returned for scores. The Rams travel to Cumberland Valley this coming Friday.

On the other side of Royersford was an equally impressive shutout performance, where Pope John Paul II hammered New Hope-Solebury 51-0. Josh Little scored two touchdowns on the ground and added a third through the air from quarterback DJ Clarke, who also connected with freshman Braden Reed for a pair of scores. The Golden Panthers clearly haven’t missed a beat on offense, averaging 47 points over their first two contests. They’re about to embark on a particularly challenging section of the schedule, hosting Springside Chestnut Hill next week before travelling to Berks Catholic in week four.

Upper Perkiomen and Pottsgrove took distinctly different paths but ended up with identical results – their first victories of 2021. For the Tribe, it was an early (noon) start at Lower Moreland Friday for a 35-20 victory. Dylan Hank had three rushing touchdowns, while Brady Thompson went for 138 yards as UP grinded out six yards per carry on 46 rushes.

The Falcons made the trek to Ocean City, NJ, to handle Lansdale Catholic 39-14, rewarding themselves for a trying couple of weeks that saw their opener with West Catholic initially delayed by weather and ultimately cancelled due to COVID protocols. Amir Brunson’s breakout game featured 163 yards on the ground and two scores on only 10 carries, while quarterback Ryan Sisko maximized his efficiency, going for 118 passing yards on only five attempts. Sisko’s four completions included a 65-yard toss to Vinny Scarnato and a scoring strike to Tyler Kaufman.

Methacton and Boyertown were unable to follow up their season-opening victories, as both squads gave up big nights on the ground to their respective nonleague opposition. Plymouth-Whitemarsh went for almost ten yards per carry – 391 in total – in a 42-14 win over the Warriors, while Exeter complemented Colin Payne’s passing with 273 rushing yards of their own in a 56-8 win over the Bears. “That’s a state contender team right there,” Boyertown coach T.J. Miller said of the Eagles.

Upper Merion claimed the Battle of the Bridge, 23-7 over Norristown as the Vikings created three turnovers and held star Norristown running back Kaden Cruz to just 64 yards on 21 carries.