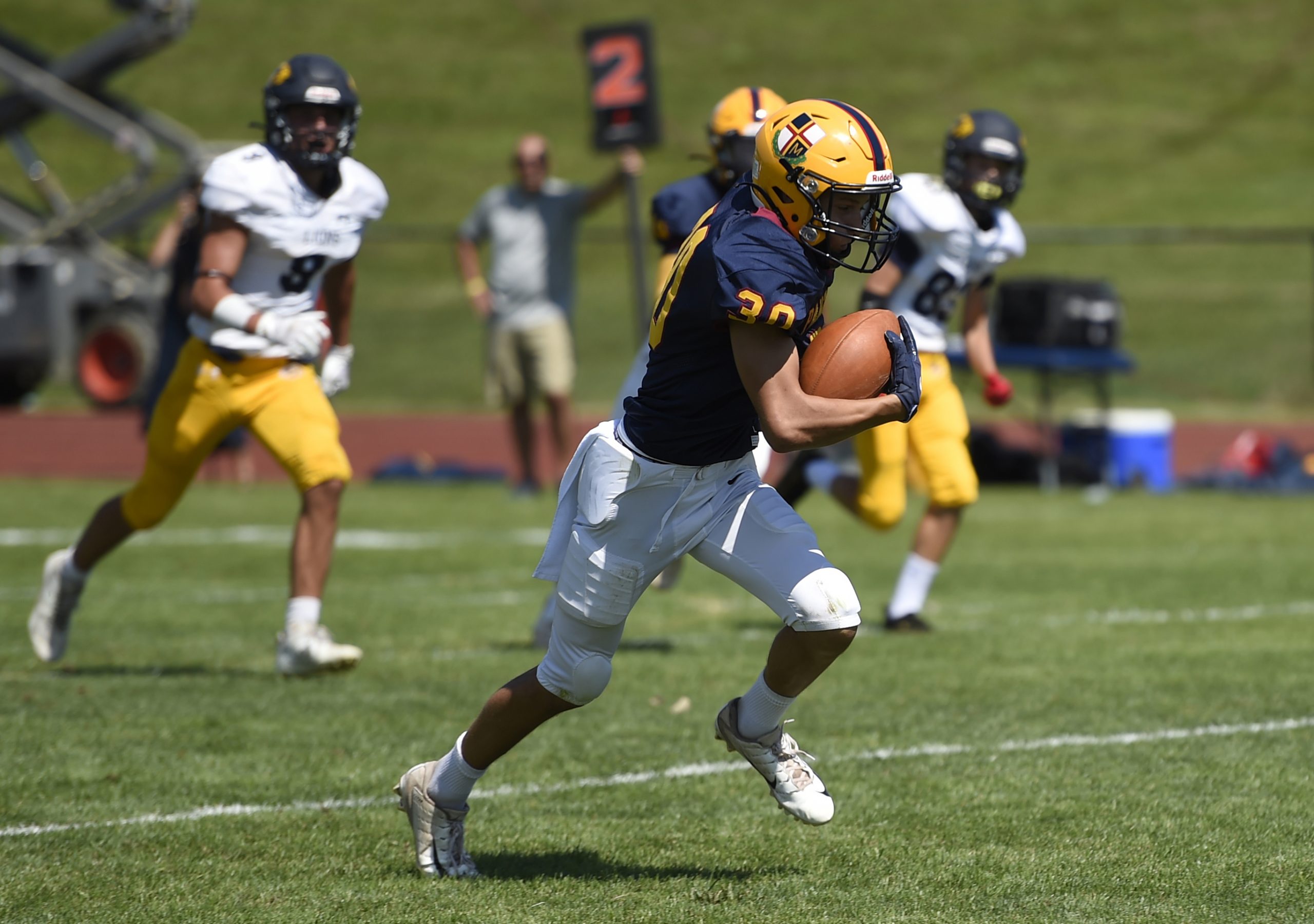 UPPER PROVIDENCE >> The Pope John Paul II football team decided to celebrate for 30 seconds and then begin to focus on next week’s opponent after Saturday afternoon’s 51-0 non-league win over visiting New Hope-Solebury.

D.J. Clarke threw for three touchdowns – two to freshman Braden Reed – Josh Little scored three times and the Golden Panther defense held the Lions to one first down and negative yardage for the day.

“Everybody just did their job,” said Clarke, who went 7-for-8 through the air for 170 yards. “The line blocked well and the backs ran well. Everybody did their job.”

Little gained 66 yards on four carries, including a 47-yard TD run on PJP’s second play from scrimmage. Kese Williams ran for 52 yards on four attempts and scored on a 15-yard run midway through the opening quarter for a 14-0 advantage. The Golden Panthers (2-0), who won 43-14 over Archbishop Carroll in their opener, wound up with 164 rushing yards on 24 attempts.

Clarke hit Reed over the middle twice and the speedy freshman wide receiver outran the defense on 41 and 54-yard touchdown plays in the first half. In between, Little ran nine yards for a score after a blocked punt and a 1-yard TD run by Derek Skarbek made it 44-0 at the half as Pope John Paul scored on all six on its drives on a total of just 17 plays.

“All of our offense is options,” said senior Clarke, who is starting at quarterback for the first time this season. “We have options one, two, three and four. If option one is open, we go with it.”

Meanwhile, New Hope (0-2) – a 30-0 loser at Council Rock North last week – finished with negative 30 yards that included four quarterback sacks and a 22-yard loss on a bad snap on a punt attempt that resulted in a safety. Ryan Sullivan was a workhorse for the Lions, gaining 26 yards on 20 carries. The senior running back made his longest run of the day of eight yards late in the first quarter and Colin Fudala followed with a 3-yard run for the Lions’ only first down.

Otherwise, the PJP defense dropped the visitors for losses or no gain on 20 of 36 plays.

“Coach Tony Yerger really does a good job of getting our guys on defense in position,” said Graver. “They believe and they play aggressively.”

Now the Golden Panthers must get ready for a tough opponent in Springside Chestnut Hill Academy in another Saturday home game.

“You’ve got to wipe it and get ready,” Clarke said concerning Saturday’s one-sided score. “We’ve got a week of practice for an Inter-Ac team. I’m excited for it.”

“We took care of business,” said Graver. “Now we’re going to focus on the next game. Focus on a real good team. We’re excited for the challenge. We have talked about it already. We’re going to enjoy this for 30 seconds. It will be a big test for us, for sure.”