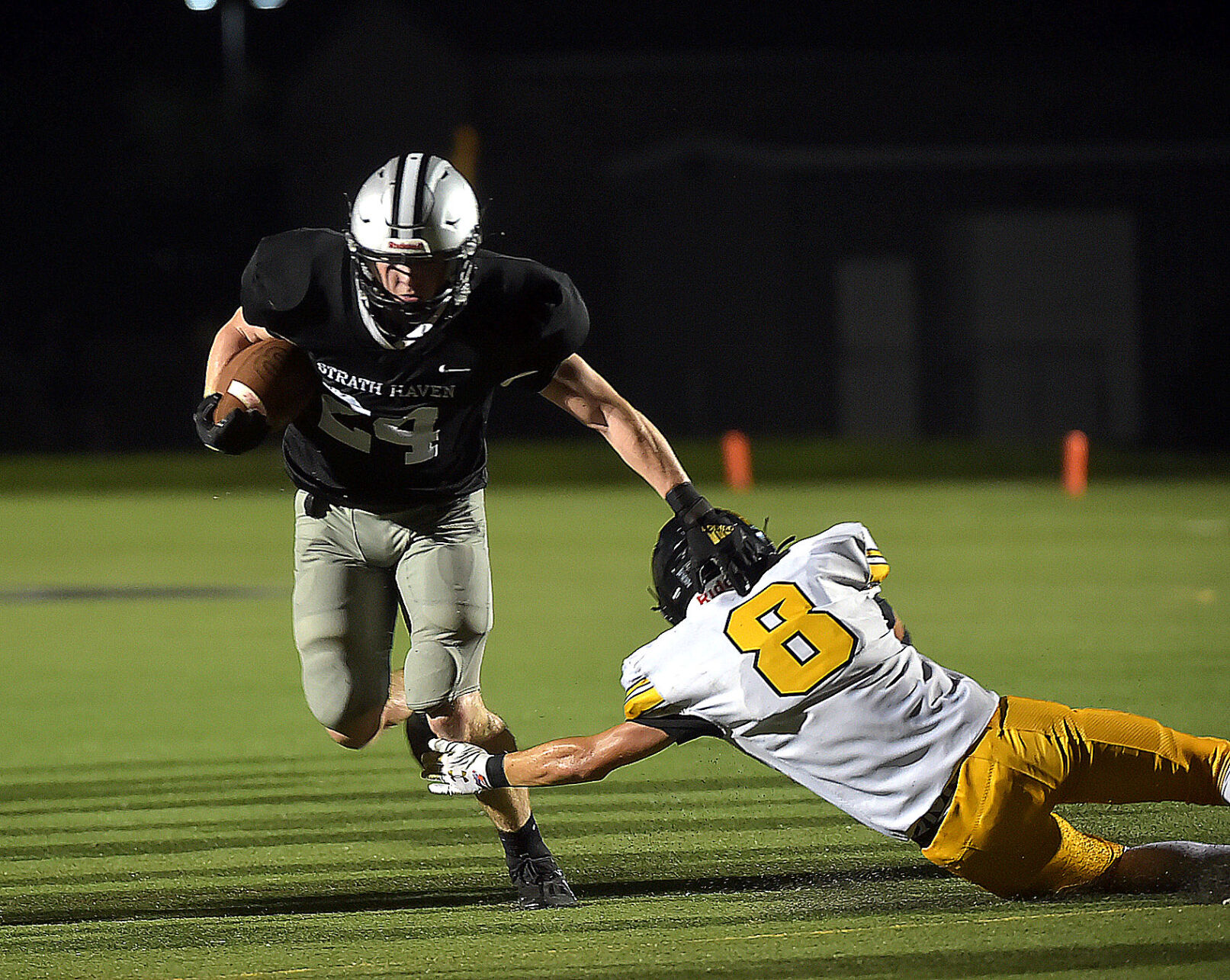 Strath Haven running back Chase Barlow, left, avoids Interboro's Kaden Walsh on his way to a touchdown in the third quarter of the Panthers' 49-7 victory over the Bucs last Friday. Barlow and the Panthers host Marple Newtown in their Central League opener Friday.

The Central League begins a nine-week schedule this week that won’t conclude until the final weekend of the regular season.

Garnet Valley is a force to be reckoned with this year and the clear favorite to keep the title. If last week’s season-opening thrashing of Downingtown West is any indication, the Jaguars won’t be a fun matchup for anybody in the Central.

The reigning three-time champions have won 25 consecutive league games dating to the 2018 campaign. The 2021 squad has the potential to be the best in coach Mike Ricci’s 35 seasons at the helm (Ricci announced his plans to retire after the season).

As the saying goes, however, championships aren’t won on paper.

Outside of the Central League, three Delaware County teams make their season debuts this weekend: Cardinal O’Hara, Episcopal Academy and The Haverford School.

O’Hara hits the road Thursday for a Catholic League crossover with Father Judge. Kickoff is 6 p.m. Episcopal is heading down the shore Saturday afternoon to play West Catholic at Wildwood High. Meanwhile, Haverford School travels to Downingtown West for a nonleague tilt with the Whippets Friday night at 7.

The Cougars challenged themselves in Week 1 against Perkiomen Valley, a traditional superpower of the Pioneer Athletic Conference. After scoring the game’s first touchdown, the Cougars allowed 23 straight points on the way to a 37-15 loss.

Despite the setback, there were some benefits to be gleaned for Springfield. Junior quarterback Jake Rama threw for 100 yards and a touchdown and also ran one in for a score. Senior wide receiver Robby Longo had five receptions for 64 yards and a TD.

The Rams fell to Methacton last week, 38-8, in a suspended game that was completed Saturday due to inclement weather. Quarterback Logan Rothberg completed 17 of 25 attempts for 172 yards and a touchdown for coach Justin Mellor’s team.

This should be the top game of the week in the Central League. Last fall, the Tigers finished in second place and the Panthers third.

The Tigers opened their campaign with a gritty 14-8 win over Collingswood (N.J.) in Ocean City. All-Delco senior Charlie Box accounted for both touchdowns, including the go-ahead score in the fourth quarter.

The Green Raiders downed Central Bucks East, 34-29, thanks to some late-game heroics. Owen Bosak plunged into the end zone from a yard out with 3:18 to play to give Ridley the lead. Senior athlete Tahir Mills accrued 264 yards and three TDs on just nine carries.

The Royals played well defensively in their 18-6 defeat to Bonner-Prendergast. However, an inexperienced offense struggled to move the ball and was tackled in the end zone twice for safeties. Montez Ellis showed potential out of the backfield, breaking off a 40-yard run and scoring his team’s only touchdown. Senior lineman Julien Laventure excelled in the losing effort.

Radnor was forced to resume its rain-affected opener Sunday at Oxford, so it’s been a long week for coach Tom Ryan’s club. Radnor rallied from a 13-point second-half deficit but lost in overtime, 25-22. First-year starting QB Jude Wallin passed for 212 yards and two TDs. Tommy Deshan had four catches for 117 yards.

The Lions suffered a 12-10 defeat at Sun Valley. Nick Chelo was a dual threat at quarterback, registering 85 yards passing and 65 yards rushing. Jimmy Cage had four catches for 65 yards and a touchdown.

The Fords couldn’t have scripted a better way to start the year. The defense held Philadelphia’s Central High to 21 yards of total offense en route to a 49-0 shellacking. Ethan Mahan had a touchdown catch and a pick-six, while Christian Pergolese ran for 67 yards and two TDs.

Jack Lledo passed for 216 yards and four scores to lead the Aces past Pottstown, 48-25. Running back Jay Zheng amassed 128 yards on the ground.