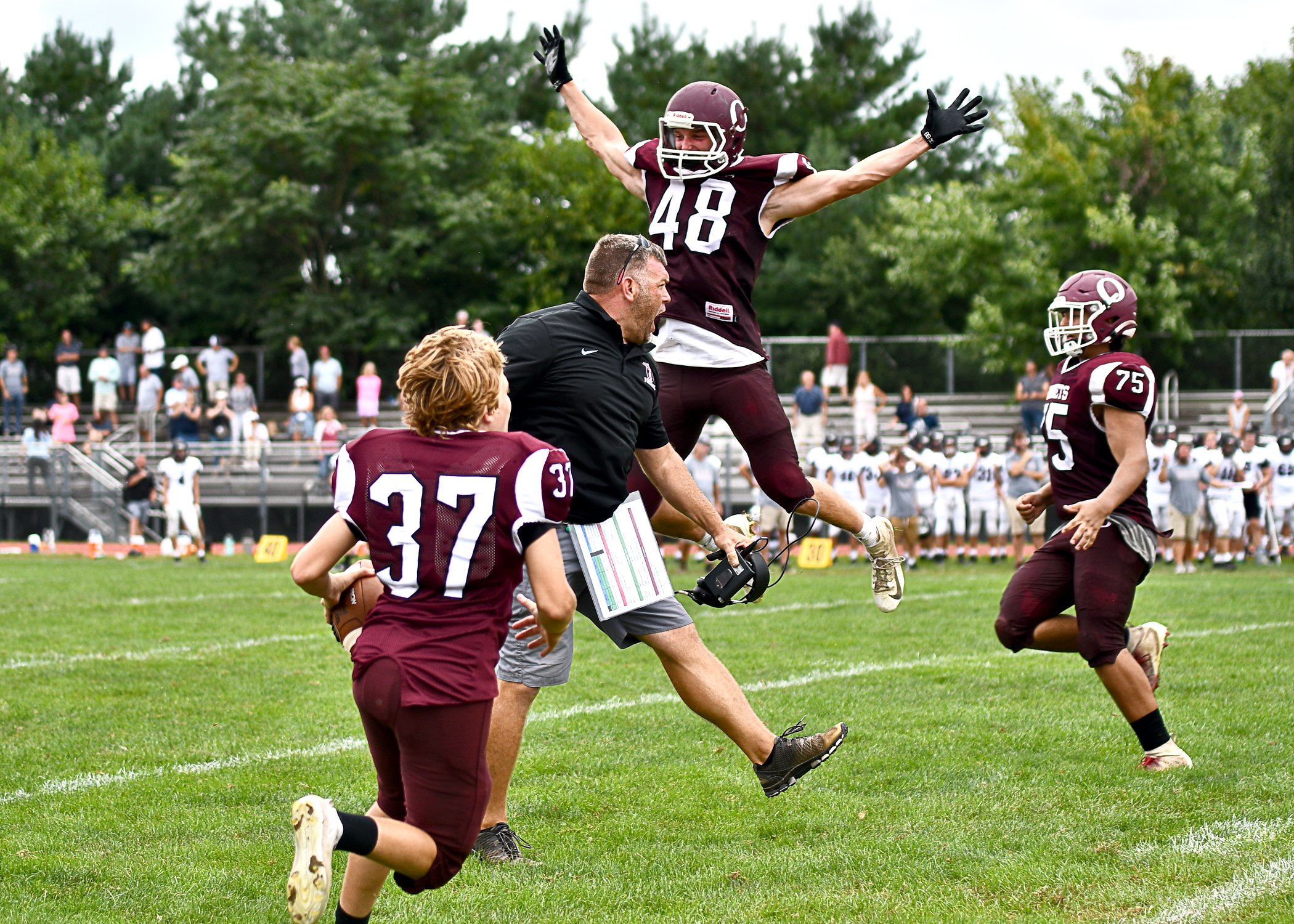 OXFORD >> A year ago, even if no one had ever uttered the word COVID, Oxford sophomore Will Smith had never played a single football game. Smith was a soccer player.

Sunday afternoon, as Oxford-and Radnor completed a game that was suspended by lightning strikes Friday night, Smith put on the pads for his first-ever varsity football game as a placekicker. All he did was go 2-for-2 in field goal tries, the second coming in overtime for what proved to be the game-winner as the Hornets (1-0) topped visiting Radnor 25-22.

“He came to me sometime over the last year and asked if he could try out for kicker,” said Oxford coach Mike Means. “He looked good the first day out there. Then he came to all of our workouts, and stayed an extra 45 minutes after, just to work on kicks. Then the two big kicks when we really needed them, he drilled them. I’m just so proud and so happy for him.”

Both teams failed to capitalize on opportunities in the first quarter before Oxford finally broke the tie midway through the second period. Starting with great field position at the Radnor 35, quarterback Dustin Long (9-for-18, 44 yards passing) connected with Ryan Evans for 34 yards. Three plays and a penalty later, Long ran it in from 6-yards out for the touchdown to make it 6-0 at the break. Long finished the game with 53 yards on 12 carries, including the touchdown.

“We knew on film that Radnor had a fantastic linebacker corps, coming off a great year last year,” said Means. “We knew we were going to be in for a battle. This was a big win for him, because it didn’t come easy. Winning and ugly game where nothing came easy is going to be a confidence builder. And he’s an amazing leader for only a junior.”

It was the Hornet defense that came up with the big play next. Facing fourth and long, Radnor lined up to punt. The snap sailed high over the punter’s head, who chased it down in the end zone. The Hornets’ Eric Marshall stripped the ball, and teammate Zach Miller fell on it for the TD.

“When the play started, I was looking for the blocked punt,” said Miller. Then I saw the snap go over his head. All of a sudden I saw the ball, and just went down and picked it up. I honestly thought the play might have been dead, but then I saw the ref put two hands up. We were solid all day on defense. We had a couple plays where we slipped up, but it feels great to be 1-0.

The Hornets were solid all afternoon on defense, forcing six punts, and ending a drive on a fumble, and on a fourth down sack. Oxford held Radnor to just 227 total yards — just 20 rushing.

“Our defense really kept us in the game,” said Means. “This was a gut-check, blue collar, defensive game. There were a couple mistakes and turnovers that led to points, but the defense played a great game for us.”

Trailing 13-0, Radnor answered back in a big way, taking the lead on a touchdown pass from Jude Wallin (13 of 30) to Phillip Martin, and a six-yard run by Dante Hopson (12 carries, 27 yards, TD). All of a sudden the game headed to the final period with Radnor up 14-13.

“I give my kids credit for coming back and giving us a chance to play overtime,” said Radnor coach Tom Ryan. “We got off to a sloppy start and that was tough to overcome. But we played hard, and just didn’t get it done in overtime.”

The Hornets answered back with the first of Smith’s two field goals of the day, this one from 32 yards out, early in the fourth. Oxford looked like they might have put the game on ice late in the fourth, when the defense forced a turnover on downs, and then saw Dom Pantalone bull it in from seven yards out. But the Hornets missed the PAT, and it was 22-14 with 1:49 to play.

Given life, the Raptors responded. Starting at their own 35, Radnor covered the 65 yards on three plays, highlighted by a 63-yard connection from Wallin to Tommy Deshan (4 catches, 100 yards), and capped by a two-yard plunge from Will Gallagher. The two-point conversion from Wallin to Deshan was good, and the game went to OT.

Oxford had first possession, and Smith’s field goal made it a three-point game. Facing fourth and five, Radnor went for the win, but the pass fell harmlessly to the ground, and the Hornets celebrated a hard-fought win.

“My coaches believed in me, and my teammates believed in me,” said Smith. “That helped give me the confidence that I could get it done. I’ve always been a soccer player. A couple years ago, I never would have thought that I’d be here kicking a game-winning field goal.”

t that I’d be here kicking a game-winning field goal.”