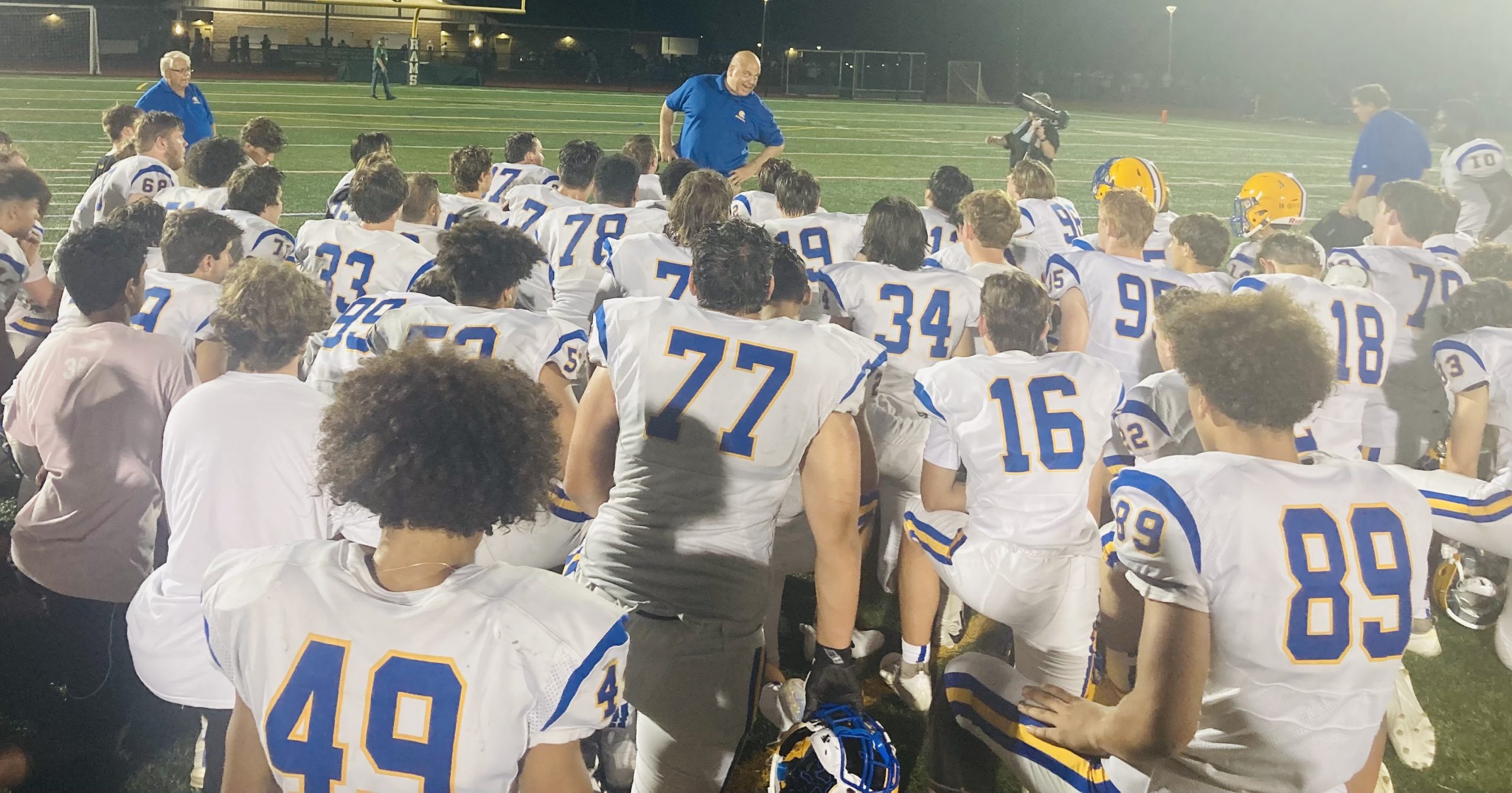 Downingtown East coach Mike Matta talks to his team after its win over Pennridge on Friday, Aug. 27, 2021. (Kev Hunter/MediaNews Group)

EAST ROCKHILL >> There was a point in Friday night’s game when Downingtown East had outgained Pennridge 195-34 in yards from scrimmage, but trailed on the scoreboard.

That all changed with the Cougars’ quickest and most pivotal drive of the night.

Visiting East received a Pennridge punt with 35 seconds left in the first half, taking over at the Rams’ 37-yard line.

Quarterback Jamy Jenkins hit Louis Ross for a gain of 18, then connected with C.J. Leo for 11.

Time to send George Bousum on a corner route.

“Jamy and I had run that play over a hundred times, until we got it right,” said Bousum, a 6-foot-3, 210-pound target. “And we finally got it right tonight.”

Bousum made a nice grab in the back of the end zone for the touchdown, sending the Cougars into the lead for good. Jenkins’ two-point conversion pass to Micahel Giardino made it a 14-7 East advantage.

“It was definitely a big momentum swing,” Bousum said. “We came into the second half and it was a just a battle from there on out.”

Bousum followed up his offensive heroics of the first half by swallowing up Pennridge ball carriers in the second. Twice on Pennridge’s final possession, Bousum made tackles for losses.

“I wasn’t playing much defense in the first half because I was catching a breather, but towards the end, I was able to get in there and make some plays,” the senior said.

Downingtown East’s defense slammed the door shut in the second half, as the Cougars held on for a 14-7, opening-night victory at packed Helman Field.

George Bousum caught the winning touchdown for Downingtown East in its victory over Pennridge on Friday, Aug. 27, 2021. (Kev Hunter/MediaNews Group)

“Great way to open up,” a smiling Bousum said afterward.

The Cougars put together two touchdown drives in the first half and the defense didn’t allow a point all evening long. Pennridge returned the opening kickoff for a score but those would be the only points scored on the Cougars all night.

“With that Wing-T offense, they’re always trying to reach the outside, and our outside linebackers and corners were able to step up and make some big plays tonight,” said Bousum, who made an impact at both tight end and defensive end.

Bo Horvath’s (21 carries/104 yards) seven-yard burst finished it off, bringing East within 7-6 of Pennridge. The extra point attempt was no good.

The Cougars again drove it inside the Pennridge 10 on their second possession but a fumble ended the drive. East also had the ball around midfield early in the second quarter but a second fumble turned things over.

East bolted into the lead for good, however, when Jenkins connected with Bousum.

The third quarter would prove to be a defensive standoff, neither team giving ground, with a combined seven punts filling the air.

The Rams’ best chance to score came with 5:48 to play, when Pennridge took over at midfield and soon was on the move.

Quarterback Xavier Dantzler hit Adam Mossbrook for 14 and a first down at the Cougar 36.

Bousum wrapped up Brennan Fisher in the backfield and an incompletion brought up 3rd-and-12. Dantzler ran for nine yards and then gained four on 4th-and-3.

Pennridge had life, and a first down at the East 25.

Another tackle for loss by Bousum disrupted things, and after a sack on second down and a short gain on third, Sean Conlon raced in for the sack that just about locked up the victory for the Cougars.

East was able to run out the clock, courtesy of a tremendous push by the offensive line and a two-yard surge by Jenkins on 4th-and-1.

Said Bousum: “It was good to come out here and play Downingtown East football. And that’s shoving the ball down the other team’s throat. That’s what we like to do, run it right up their gut. And that’s what we did in the second half.”

Things could not have started any better for the Rams.

Mossbrook took the opening kickoff, found a crease, and sprinted down the right sideline for an 85-yard score and a quick 7-0 lead.

“Adam did a great job, found the hole, and that kickoff return team did a great job of picking up the blocks and creating a seam for him,” Rams coach Cody Muller said. “We did an awesome job with that fast start. But like I told the kids, we have to continue with that momentum. We can’t be up and down the way we were.”

The Rams’ defense held firm after the break.

“I give full credit to our defense. They played great when we needed them the most,” Muller said. “As far as offense goes, there were little mistakes and things we need to clean up and be better at.”