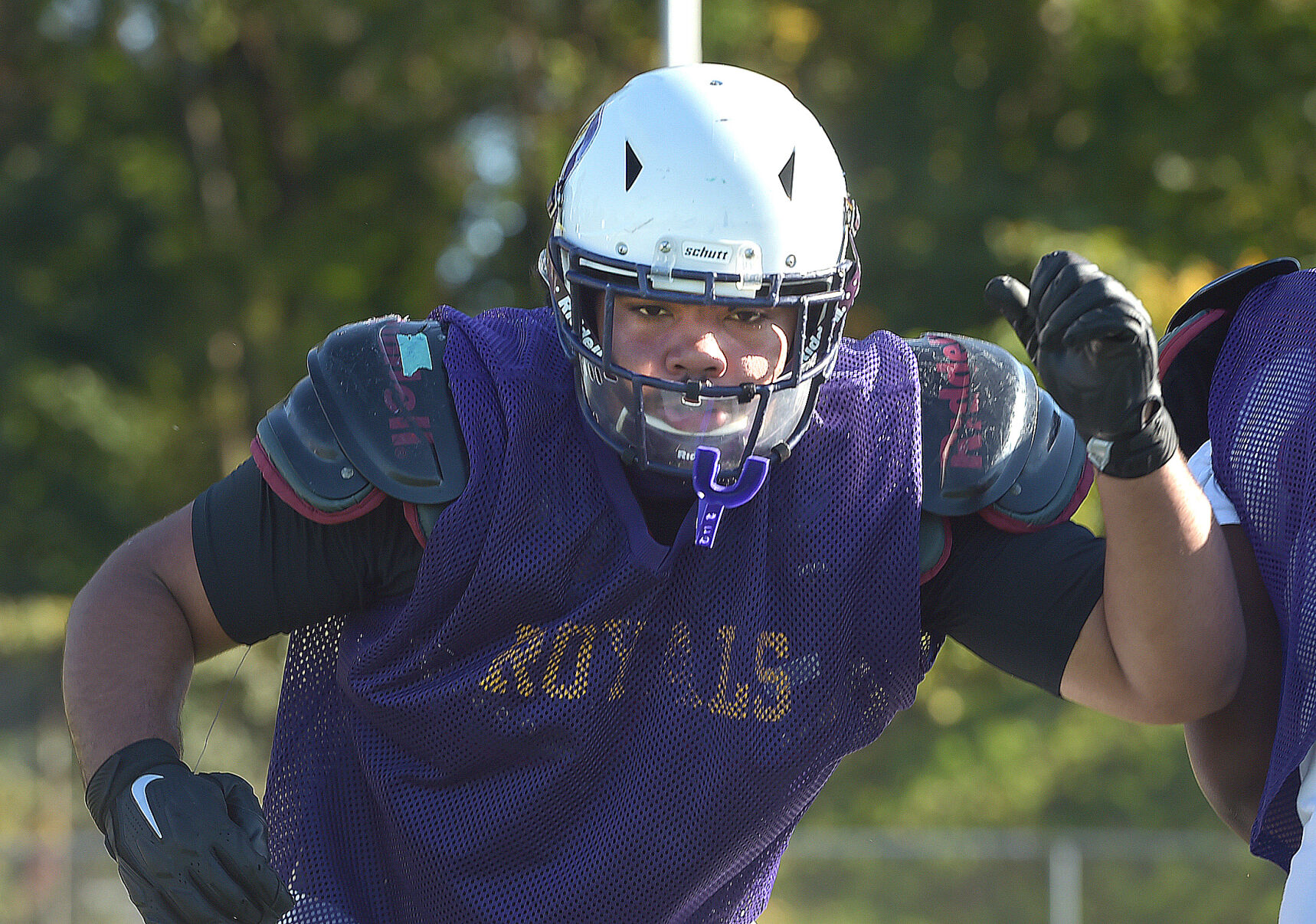 UPPER DARBY >> Shaq Salahuddin was in middle school when he watched Odell Beckham’s one-handed circus catch against Dallas in 2014. Already drawn toward football, that exhilarating moment sealed it.

He’d plot a slightly different path than Beckham, landing on the line at Upper Darby. But the mentality of constantly battling for every inch, whether Beckham against a hapless cornerback or Salahuddin on a bull-rushing defensive tackle, remained the same.

Salahuddin and his linemates hope to model that mentality for a young Upper Darby team hoping to bounce back from a disappointing 2020.

Last year’s disruptions hit the Royals harder than most. They introduced a new coach in Dave Barr in January, then had to wait months to work with him in person until the pandemic relented in the summer.

A late-summer surge that originally canceled the season before the Central League reconsidered meant that the final push was a condensed, get-to-know-you sprint before games came thick and fast.

It predictably didn’t go well. The Royals went 2-4, scoring just six points in a three-game losing streak to open the season. They squeaked out wins over Lower Merion and Conestoga before a one-point setback to Penncrest.

The abbreviated season was better than nothing, keeping kids engaged in the program. It’s paid off this year, Barr said, with high turnout numbers and a robust freshman class. But the varsity experience was mixed.

“It was us just playing to play, so we could play football,” junior running back Montez Ellis said. “Now that we have a longer season and we’re practicing longer with each other, I feel like we’re going to do way better than what we did last year.”

The nexus of that improvement is on the line. Salahuddin anchors the offensive line with fellow senior Henry Davis. The defensive front is bolstered by Dorsey Shoultz and Julien Laventure, a wrestling All-Delco. All four can play on either side of the ball, though Barr will mix and match as conditions require.

In Salahuddin and Laventure in particular, the Royals have leaders eager to show the way to much more than just running lanes. Both players have a desire to do the dirty, inglorious work required to make a football team go.

“Leading from the line, you’ve got to lead hard,” Laventure said. “You’ve got to lead strong. In the trenches, you can’t mess around. There’s no games. Everybody’s coming at you. It’s full contact at all times. To lead from that point, you have to practice what you preach. I’ve got to do it, and I’ve got to show the guys, this is how you do it, and they follow suit. If I can do it, you can do it, too.”

Both linemen are heartened that they have a group of underclassmen willing to listen and work. There are opportunities for playing time waiting, and while the Royals have a sketch of who will occupy the main skill positions, there are ample gaps to fill.

Donte Shaw is likely to reprise his role as the starting QB. Ellis will be a focal point of the offense, however they get him the ball. Lucas Venuti will be a primary threat in the passing game and a defensive disrupter at outside linebacker and safety.

A big part of the offensive success will be how the line amplifies the talent of the guys with the ball.

“Playing behind them, I expect for the hole to be there every time,” Ellis said. “The hole is so big you can drive a car through it. They make sure I get yards.”

A big part of the equation is developing trust. Last year’s reductions in practice time interrupted that. With the returnees and talented newcomers, and a group up front that they hope will quietly do the job with regularity, the Royals hope to build something special.

“I really trust those guys out there,” Salahuddin said. “I know I’m going to mess up here and there, but I know they’ve got my back like I’ve got theirs.”