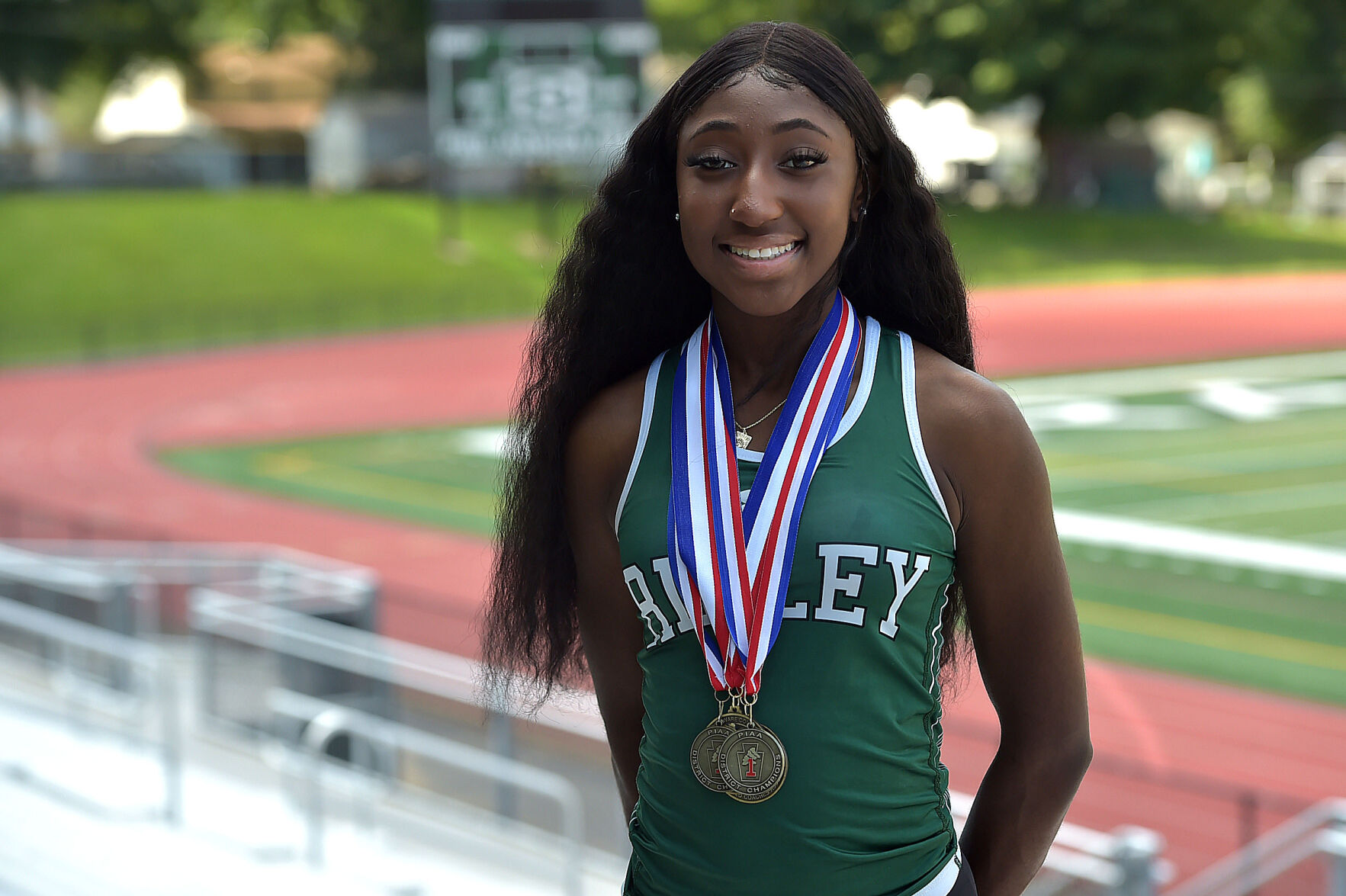 RIDLEY TWP. — Brianna Foster had every intention of competing in the PIAA Class 3A Track & Field Championships.

An MRI changed those plans.

The Ridley senior suffered a right hamstring injury on her second attempt in the preliminary round of the long jump at the District 1 girls track and field championships. She never made her third attempt or participated in the final but her initial jump of 17 feet, 11 inches was good enough for third place and an automatic berth in the state meet.

Initially diagnosed as a strain, she continued to prepare for a trip to Shippensburg, but the discomfort only grew worse.

“I tried to jog and I would feel it then so I knew I definitely couldn’t sprint and jump,” Foster said. “I knew that if I want to do well I would have to sprint and jump full out.”

Ridley’s Brianna Foster is across the tape first in her heat of the 100 dash at the Delco Championships. She went on to win the event for the third time in her career. (Pete Bannan/MediaNews Group)

As a precautionary measure, then, Foster had an MRI the week of the state meet, and the image revealed that her hamstring was torn, not strained. At the advice of medical professionals she pulled out of the meet.

“I couldn’t stride or anything,” Foster said. “I didn’t want to make it worse. I was disappointed because I was ranked high in the state (in the long jump). I knew I could have placed in the top three or even won it so I was really disappointed.”

It was the second time in her career that her season was cut short by an injury. As a sophomore, a torn quadriceps kept her out of the state meet.

“It seems like it happens every time at districts, I get hurt,” Foster said. “I was thinking, ‘Maybe it’s not meant to be.’ I always get hurt.”

“It wasn’t ripped to the point where it was ripped off the bone,” Ridley coach John Boyle said. “They said if she had another week she could have jumped. It’s a shame because healthy she might have won states.”

The injury may have brought Foster’s season and scholastic career to an abrupt end but it could not put a damper on the year she had.

Foster won the 100-meter dash title at the Delco Championships for the third time, joining Upper Darby’s Jennea Bridgeford (2002-04) and Chester’s Rayiana Johnson (2007-10) as the only athletes to accomplish that feat since 2001. Only the cancellation of the 2020 season due to the coronavirus pandemic prevented Foster from being a four-time champion like Johnson.

Foster also won the county long jump championship, the only athlete to win both the 100 and long jump at Delcos since 2001. She also was a key member of Ridley’s 4 x 100 and 4 x 400 relay teams, which gained her membership in another exclusive club as the 2021 Daily Times Athlete of the Year in girls track.

Foster, Clayton and Davis are the only repeat selections from 2019, the last time the team was picked. Foster is a three-time first-team All-Delco and Clayton a two-time choice. They along with Davis, Dumont and Timoney are the seniors on the squad. The juniors are Johnson, LaForest, Henkel, Sydnor and Etienne. Elliott, Leneweaver and Trainer are sophomores and Hill is the only freshman.

The All-Delco team is selected in consultation with county coaches.

Foster’s success on the track isn’t a surprise. She comes from an athletic family. Her father, Brett, was an outstanding long and triple jumper at Ridley in the early 1980s. Her older sister, Toresha, was a four-time Delaware Division II champion in the high jump at Appoquinimink and competed in multiple events at the University of Delaware. Her brother, Brett Jr., played basketball at East Stroudsburg and Cabrini.

Her sister Toresha had a big influence on Foster’s development.

“I wanted to be fast like her,” Foster said. “That’s what really pushed me. I wanted my times to be better.”

Despite the delay, she took to the long jump naturally. She leaped 17-8 in the first league meet of the season. After a jump of 16-0 at the Delco Relays, Foster went a personal best 18-2½ at the Leonard Stephan Invitational, then 18-0¼ at the Upper Darby Invitational and 18-2 at the Delco Championships. She finished first in each of those events.

“My dad was trying to get me to long jump for a long time,” Foster said. “I never did it because I was in the 100 and the 200 and most of the relays. I had a lot going on and then I finally decided to try it. I jumped pretty well so I just kept on doing it.”

Foster will continue to sprint and jump in college at Kutztown University. She’s ready to take that next step, but is doing so at a measured pace. She’s able to jog and plans to ramp up her workouts starting next week.

“My goal is to be healthy for the indoor season,” Foster said.