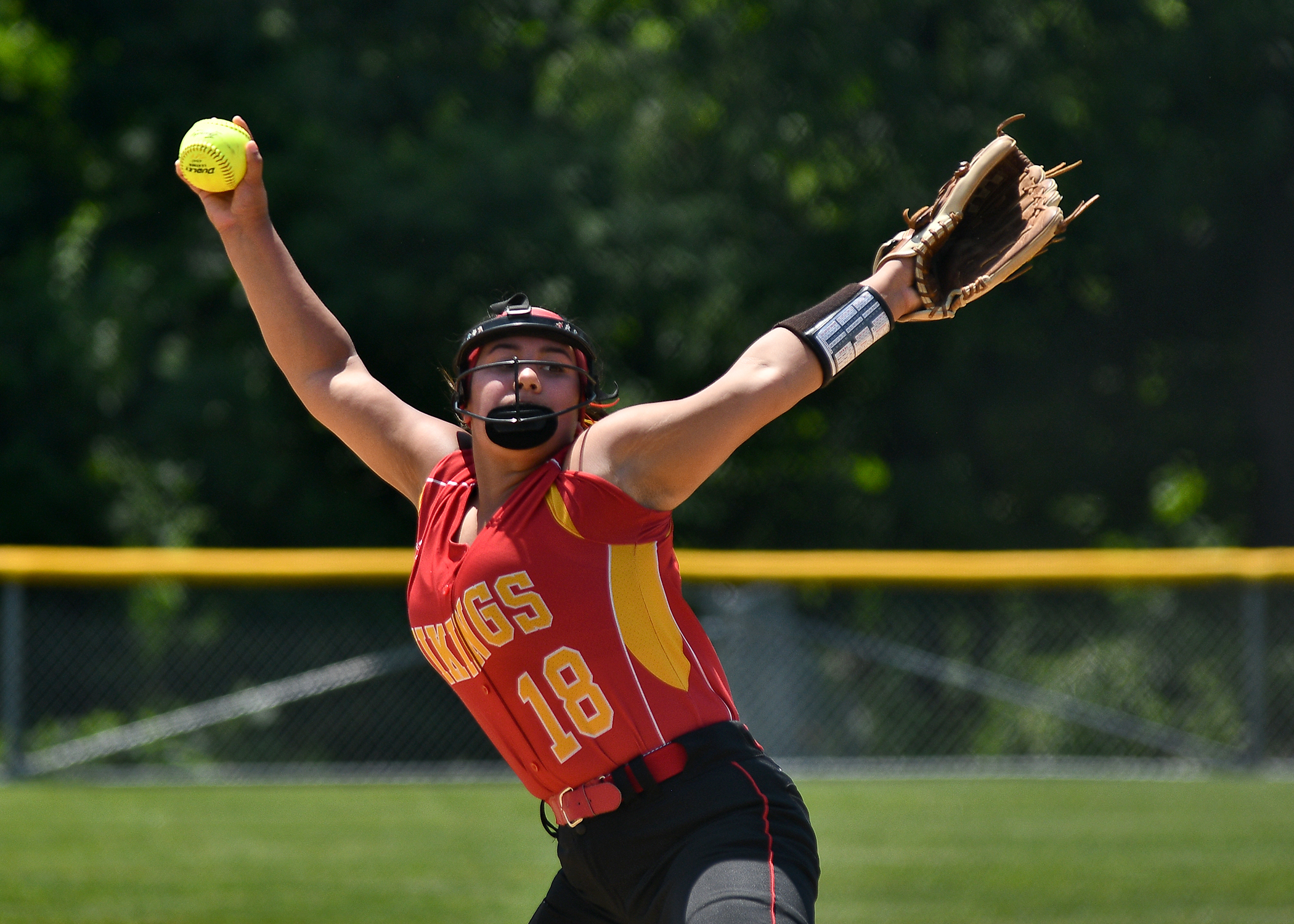 Gomez was at her best when the pressure was on. In the post season, Gomez allowed just two runs on six hits during the Vikings’ championship march through the District 1, 5A tournament. The Emerson recruit set the school record for career strikeouts, with 318.

An excellent defensive catcher, Sudall effectively shut down the running games of opponents. With a bat in hand, Sudall had hits in 20 of the Cougars’ 21 games, hitting .508 with 31 RBI and 19 runs scored.

Hitting clean-up in the powerful Whippet batting order, DeFreitas hit .515, with 35 hits, eleven of which went for extra bases, including five home runs. DeFreitas knocked in 31, while scoring 14.

An excellent defensive player, Burleson, a Wilkes recruit, posted a fielding percentage of .946. She contributed to the Warriors’ offense with 21 hits, including nine doubles and a home run. She knocked in 18, while scoring 14.

One of the very best players in the county, Posner, a Syracuse recruit, hit .522 for the regular season. She had 35 hits, 16 for extra bases including eight doubles, two triples and six home runs. She knocked in 32 runs and scored 35.

Winters put up some eye-popping numbers for the Pioneers. Winters hit a county-high .585, with 12 doubles, two triples and eight home runs. She had 23 RBI and scored 28 runs. The ultimate scholar athlete, Winters earned an un-weighted GPA of 4.0, and scored a 1510 on her SAT. Winters is committed to Cornell University for softball.

The consummate lead-off hitter, Gomez set the school record for career hits (114) and RBI (85), despite losing a year to COVID. This season, Gomez, headed to Catholic University, hit .444, with 40 hits. She knocked in 19, and scored 24 runs. The centerfielder also showed great range in the outfield, playing a key role in an outstanding Vikings’ defensive outfield.

One of the top defensive outfielders in the county, the speedy Sinkus led off for the Whippets, and hit .473, with 35 base hits. Sinkus stole 18 bases on the season, and scored 36 runs, tied with Posner for the team high.

Laughlin had 12 games with two or more hits, and finished with 32 hits and a .500 batting average. Twice this season, Laughlin had two homers in a game, and tied the school record with eight for the season.

West Chester East was the last county softball team standing in 2021, reaching the Class 5A state quarterfinals before suffering a heart-breaking, one-run loss to West Scranton. The Vikings finished the season with a record of 17-8.
Along the way, the Vikings rang up a regular season of record 13-7, good enough to earn the No. 4 seed in the District 1 Playoffs. West Chester East played its best softball of the season in the district tournament, allowing just two runs in an extra innings win over Rustin, then posting back-to-back shutouts to clinch their second straight District 1 Class 5A championship, interrupted by the lost season to COVID-19. The Vikings then added a dominant 8-0 win over Daniel Boone in the opening round of the state tournament.
As the man at the helm for the Vikings, Bobby Swier is the 2021 Daily Local News All-Area Coach of the Year for softball.
“I truly appreciate the recognition but know that this honor also goes to the assistants and players as well,” said Swier. “I want to give a shout-out to and thank you to my assistant coaches, Jeff Mashbitz, Lindsay Wilson, and Marc Fuertes. At the end of the day, we’re not the ones on the field making the plays, but I truly believe that if you surround yourself with good people, good things will happen. We all work well together and that’s something that the players pick up on.”
Following softball stops in Phoenixville, Boyertown and Owen J Roberts, Swier took over the top spot at West Chester East in 2016, and has guided the team to great success since.
The Vikings were a senior heavy team this year, and while that kind of experience seems like a good problem to have, it can also lead to a team butting heads over leadership. That wasn’t the case at all here.
“ We had seven seniors this year and two of those seniors were captains,” said Swier. For some teams that may be tough with that many seniors and people wanting to lead differently or do their own thing, but we never had that issue. Our captains did an amazing job for us, but every single senior lead in their own way.”
Coaching is in Swier’s blood. Besides softball, Swier has coached football and wrestling within the WC East system, and now coaches those two sports at Spring-Ford, where he teaches Personal Finance.
“I have been coaching football, wrestling, and softball for the past 12 years,” said Swier. “ I enjoy coaching all three sports, as they all have their own style in how your delivery is at each practice or game. But I also coach all three sports because I’m a big advocate for players being involved in as much as you can. I have learned a lot over the years from each head coach or assistant that I worked with and continue to grow each year.”