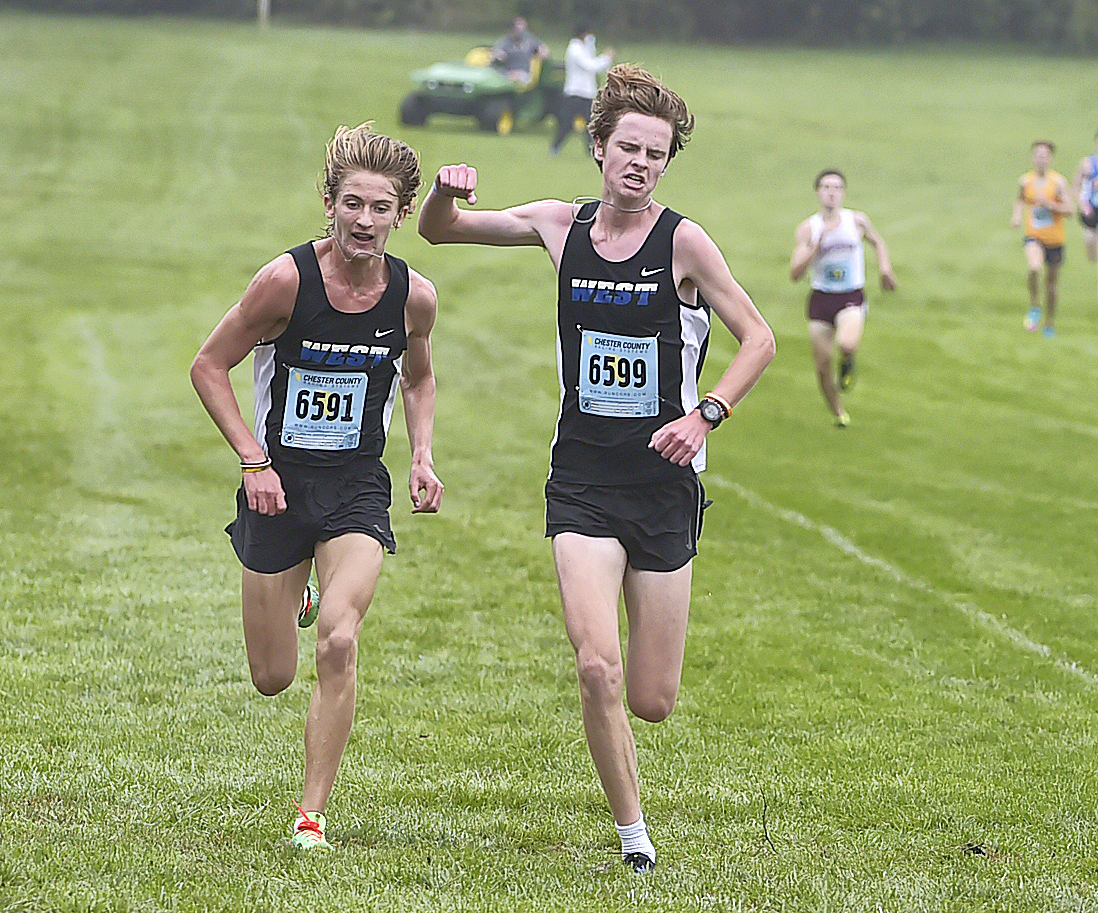 DOWNINGTOWN >> Aiden Barnhill and Declan Rymer have been best friends, training partners and teammates going back to middle school.

But the pair forever cemented their shared running legacy at an unlikely time and place that just happened to be the final time they shared the track as seniors at Downingtown West.

“At the end of the race, we looked at each other and it was like, ‘what just happened?’” Barnhill added. “We ran the best race of our lives.”

It happened, ironically enough, in early June a week after the PIAA Track & Field Championships. At the John Hay Distance Festival at West Chester Henderson, Barnhill and Rymer shocked everybody, including themselves, by going 1-2 the 1,600-meter run in a time that would have easily won the state crown: 4:05.

“As usual, Aiden was a stride ahead at the finish, but they are rarely separated by much,” said Mark Schmidt, the head coach at Bishop Shanahan.

So, just how good is 4:05? In addition to being a personal best for both, it was by far the fastest time by a tandem in the event, by teammates, in state history.

“They both rank in the top-10 in Pennsylvania history in the 1,600,” said their coach Scott Burns. “And at the time they were both top-10 in the nation.”

It was an astonishing culmination to a 2021 season that was filled with milestones for Barnhill and Rymer, who established themselves as one of the top distance runner duos in the entire nation.

“It’s not like we chose to go to a private school,” said Rymer, who lives in Uwchlan. “I moved here when I was in kindergarten and we just happen to go to the same school.

“It’s remarkable that we ended up being so close to each other in terms of running ability. To have two kids on the same team, that are top-10 in the country in the mile — and we are only a half-second apart — is really crazy.”

Downingtown West’s Declan Rymer points to his supporters after winning the 3A boys’ 1,600 meters  at the District 1 Championships at Coatesville. (Austin Hertzog – MediaNews Group)

As you can see, very little separates the two. So the Daily Local News decided that it only made sense that Barnhill and Rymer share Athlete of the Year accolades for boy’s track & field in 2021.

“It’s a once-in-a-generation thing,” Burns said. “These guys are an incredible mixture of talent, but they also have all of those other elements, like work ethic, that is second to none. They also have a sense of community and an understanding of how important all of the support groups are.

“Plus they have the genetic makeup to stay injury free. In their career, for the most part, they’ve avoided any major injuries.”

The fact that their signature moment came as an encore at the tail-end of the season made the whole story even more outlandish.

“I didn’t think much of that meet, honestly, and I was very relaxed,” Rymer said.

“It was just one last senior race. It kind of blew my mind how fast we ran. To run better that day than at the state meet is crazy.”

Barnhill – who hails from West Bradford — felt the same way.

“I just remember being kind of shocked because I had focused all of my mental energy on states,” he said. “I had a good race at states, but the next week I was tapped out mentally, and I ended up running four seconds faster than my PR — which is crazy.

“This meet was kind of an afterthought to me. Sometimes, I guess, you just have break-out races when you least expect it. Maybe it’s because I was relaxed and I just went out there and ran.”

Same outlook and attitude. And the same eye-opening result.

“These are two amazing kids top to bottom,” Burns said. “They are everything a coach could ever ask for.”

Barnhill and Rymer first met in eighth grade at Downingtown Middle School before the start of the cross country and track seasons. They just happened to be in the same circle of friends.

“And we’ve been best friends ever since,” Rymer said. “We hang out together all of the time outside the context of the team.”

Aiden Barnhill takes the baton from Holden Betz for the final handoff of the Downingtown West 4×800. (no first names in results)

As sophomores, they helped Downingtown West win the team title at the 2019 PIAA State Cross Country Championships. And then last fall the Whippets placed second overall and Barnhill was named cross country athlete of the year by the Daily Local News.

Fast forward to late April, Barnhill and Rymer went 2-3 in the 1,600 at the Whippet Invitational, and it wound up being a breakthrough outing. Their times (4:09 and 4:10, respectively) were a real head-turner.

And even though they were in different distance events, the duo did what they’ve always done though it all: support each other.

“We are very competitive people, but I think we’ve managed not getting overly competitive because that’s what we have to do in workouts to succeed,” Barnhill said. “I think we are both smart runners, and I think it’s helped to have two people who have the same mindset about running.”

Burns agrees: “It’s not your typical relationship where they are ultra-competitive against each other. And that’s what made it so special. They worked together and lifted each other up to reach these new heights.

“I’ve don’t think I’ve ever heard either one of them say a negative thing about the other. It is all just respect, appreciation and gratitude to be together on the same team.”

Despite all of the similarities, it’s interesting to note that Barnhill and Rymer have completely different running styles. And a lot of it has to do with their frames: Barnhill is 5-foot-10, and Rymer is 6-4.

“They are unique in their own way,” Burns said. “Declan is a giraffe out there. He is so tall, and he has a ton of power and he just eats up ground. Aiden kind of floats along and his stride in incredibly smooth.”

They both agree. Barnhill acknowledged that he feels more comfortable running cross country, and that Rymer’s strength is on the track.

“I have a longer stride,” Rymer pointed out. “I don’t have quick leg-speed, but I have the ability to kick at the end of distance races.

“Since Aiden is shorter, it’s easier for him to get over hills. He has a more efficient stride. At the state cross country meet, he was 30-40 seconds faster than me. But in track, we are half a second apart in the 1,600.”

Downingtown West’s Declan Rymer leads the field to the finish to win the 3A 1,600 meters Saturday at the District 1 Championships. (Austin Hertzog – MNG)

Both are moving on to the Division I college ranks to compete in both cross country and track. Barnhill is headed to cross country power Northern Arizona – Rymer to Virginia Tech.

But the bond they’ve formed and the legacy they’ve carved out together at Downingtown West is forever sealed.

“We always thought in terms of ‘we are going to run well,’” Barnhill said. “If one of us runs poorly, it’s not a successful day because we didn’t do it together.

“We are just neighborhood Downingtown kids. We weren’t recruited and we are not professionally coached, so for both of us to be on the all-time Pennsylvania list is kind of insane.”