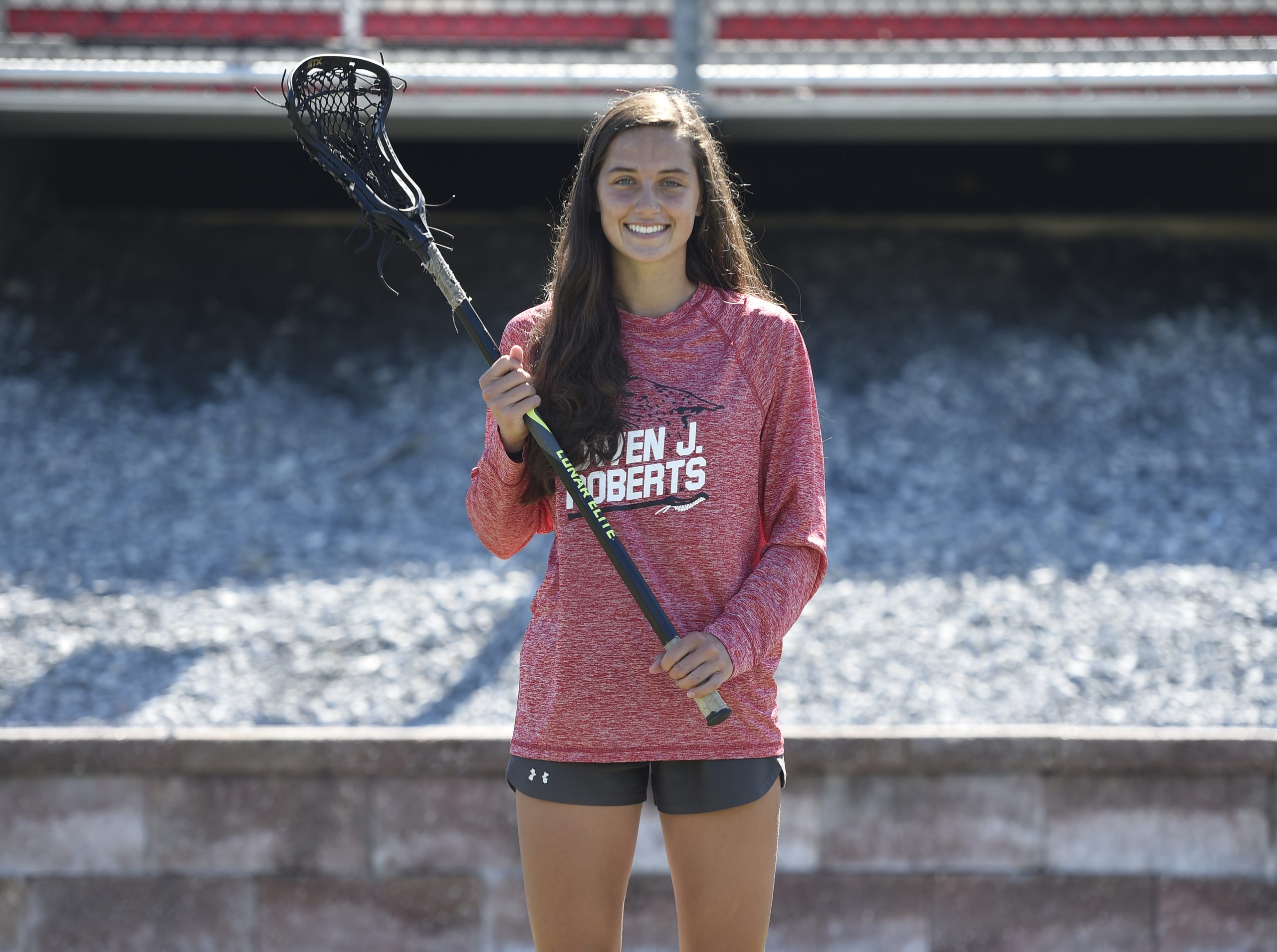 Gabbi Koury had four varsity seasons under her belt before suiting up for the Owen J. Roberts girls’ lacrosse team this spring.

None of them happened to be in the sophomore’s sport of choice.

Following an extra year of waiting and many other years of watching, Koury finally got the chance to don the Wildcats’ red and white on the lacrosse field in 2021.

What followed was a spectacular sophomore season, impressive for any player regardless of age, and a long list of accolades that included the 2021 Mercury All-Area Girls Lacrosse Player of the Year.

“I’ve always wanted to play for this team,” Koury said. “They’re such a great group of girls, so it’s fun for me and I feel like I fit in pretty well.

“Not having a season last year, I wasn’t sure what it was going to be like, but basketball and soccer season were both fun,” she added. “We always had fun during soccer season, same with basketball, but I never realized how much I would like lacrosse season since we missed it last year. It’s definitely my favorite.”

Though she said there were some nerves in anticipation for her first varsity lacrosse season, Koury started her OJR career with a four-goal, two-assist performance April 6 against Pottsgrove.

It set the tone for a season when she tallied 77 goals and 49 assists in 23 games, helping the Wildcats (21-2) to a sixth straight Pioneer Athletic Conference championship and runs to the District 1 and PIAA quarterfinals.

Koury was the PAC MVP, an All-Pennsylvania Area Schoolgirls Lacrosse Association selection and a US Lacrosse All-American.

“Gabbi’s been a dominant player for her age group for as long as I’ve known her,” said OJR coach David Schlesinger, who has coached Koury and many of the other Wildcats’ sophomores since middle school. “The biggest thing is that this is really the first year where she’s competed against kids who were older than her.

“Seeing all the work she put in to be in shape, be strong, develop her skills, all of that came together this year and the results are all the honors that she’s been earning this year.”

Koury excelled at her two other sports soccer and basketball as well, but she was always ahead of the curve when it came to lacrosse.

She first played organized lacrosse as a kindergartner in a 3rd and 4th grade league with older sister Maddi, a 2020 OJR grad now playing Division I lacrosse at Mercer University (Ga.).

“She just picked up a stick and it took a little bit of time, but once she got the fundamentals down she took it and ran,” said Maddi, OJR’s all-time assists leader.

When she wasn’t at one of her own games growing up, Gabbi was often at OJR taking in one her siblings’ games.

Trip and Nikki Koury’s three children built their love for the game and skill sets playing together growing up.

At the Koury household, there is a lacrosse goal and multiple bounce backs in the backyard and an unfinished basement to put in work when the weather doesn’t permit outside play.

“I think we all just had the most fun playing it because it was that one sport that we would always go out in the backyard and play,” Gabbi said. “It just made it so much fun for us. We could really bond over it.”

Following her siblings’ footsteps and finally taking the field for the Wildcats this season was a special moment for the youngest Koury this spring.

“It was really cool to join (the OJR girls lacrosse team) finally because I’ve been watching it for so many years,” Gabbi said. “I was really just ready to be on the team.”

Even with the departure of a talented senior class that included multiple Division I players, Koury helped the Wildcats to a 17-0 start before their first loss of the season to eventual District 1-3A champion Unionville in the district quarterfinals.

They rallied for a pair of wins in the district playback to earn a spot in states and the district’s fifth seed then followed with a 20-0 win over Central in the first round of states and a season-ending loss to Radnor in the PIAA quarters.

The Wildcats had hopes of a state title, but the inexperienced squad put together an impressive campaign nonetheless.

“It was actually how crazy we clicked on the field, our whole entire team,” Gabbi said. “I think that’s what made us so successful. As soon as we started practicing and playing, our bond was already there. They became my family and my best friends, so that made it really easy.”

At the center of the Wildcats’ success was Koury — scoring key goals, setting up teammates and contributing to the defensive effort on the other side of the field. She and classmate Alexa Vogelman displayed a noticeable chemistry on the field.

Gabbi’s maturity to play the game right way and uplift her teammates at such a young age drew the admiration of older sister Maddi, who assisted the Wildcats on the sidelines down the homestretch of their season and also helps Schlesinger coach Gabbi and others at NXT Lacrosse in the summer.

“I think it’s really important that she doesn’t try to do too much herself,” Maddi Koury said. “Because you see some really great lacrosse players who do and it works out sometimes and sometimes they take on more than they can handle. I think she was really good about recognizing that. Her lacrosse IQ was pretty impeccable.”

“That makes her very difficult to guard,” Schlesinger said. “I never have to fear with her when other teams try to double team her because she can pretty normally defeat the double team and if not to feed out of it and sometimes even find the open player for an easy goal. She’s very smart, she’s got a great lax IQ and combine that with all the physical ability and that’s why you have sophomore who’s an All-American. It’s pretty extraordinary what she’s achieved.”

Koury will likely be collecting her eighth varsity letter by the time next spring rolls around.

With a missed freshman lacrosse season it will be more difficult to figure her way into the program’s record book, but she’s on pace to be one of OJR’s finest players nonetheless.