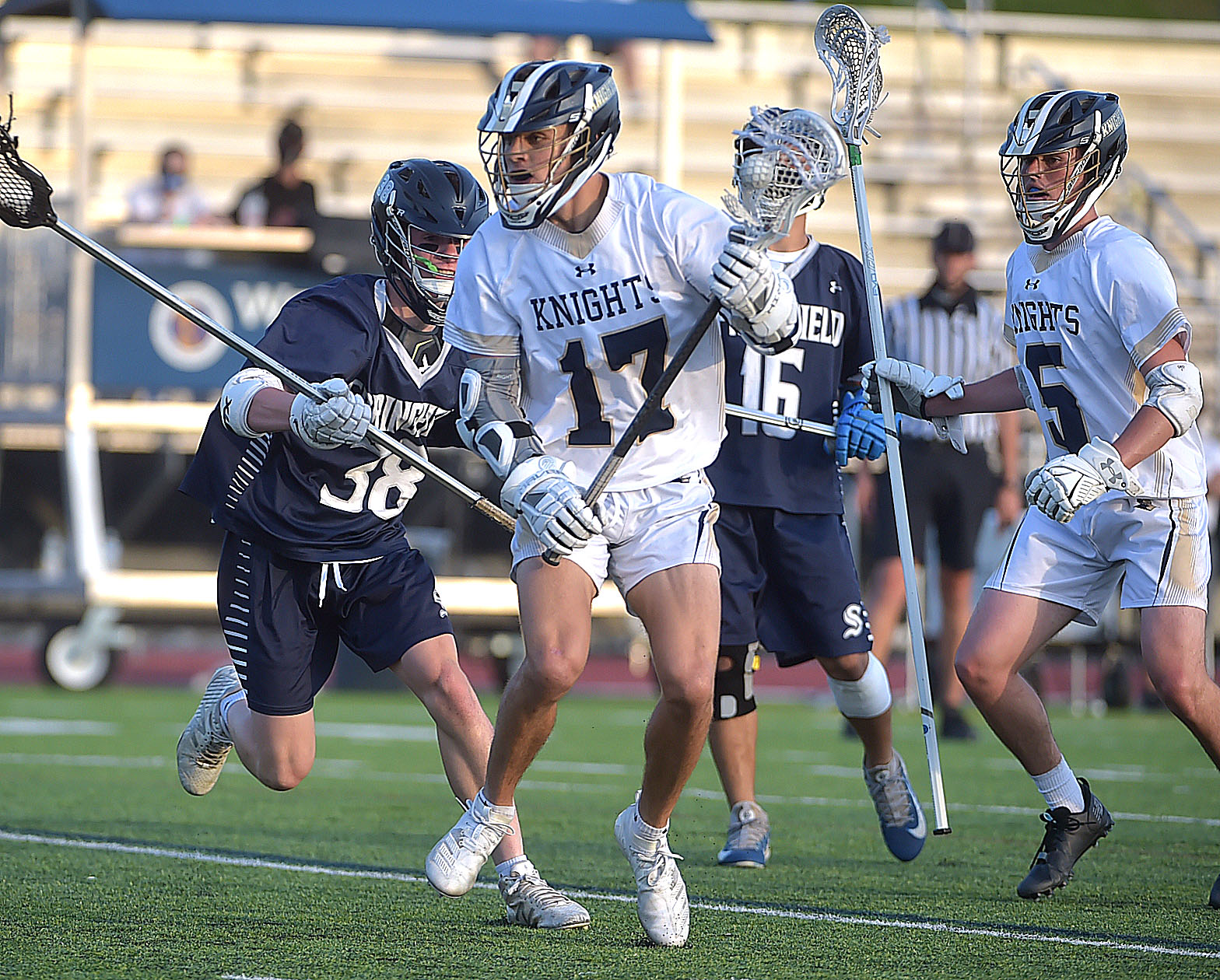 The top vote-getter at attack by coaches for All-Ches-Mont, Hemberger led the Cougars with 44 goals and added 18 assists. The junior was a top asset for an East squad that challenged for the league title. “Alystair is a smooth lefty attackman who provided high offensive production,” said his coach Joe Horvath.

A senior, Murray shattered the school record for points in a season with 96. The transfer from Bishop Shanahan equaled the Rustin single-season mark with 62 goals and also dished out 34 assists. “Owen is the engine that makes our team run,” said Rustin head coach Kevin Philibin. “He is a dual-threat attackman who can score at will and is adept at finding open teammates.” Murray has signed to play collegiately at Division I Quinnipiac.

A starter since he was a freshman and helped the Pioneers win the District 1 3A title and earn a berth in the state final, Reilly was ’Stoga’s most valuable offensive performer in 2021. He amassed 50 goals and 15 assists this spring, and was an All-Central League first team pick. “His speed and mental toughness are his best attributes as a lacrosse player,” said his coach Brody Bush.

His team’s leading goal scorer, Spanos poured in 62 goals and added 20 assists and 33 ground balls and garnered All-American honors. The 6-foot-4 senior is a physical presence and has committed to play college lacrosse at Maryland. He was named the Most Valuable Players in the Inter-Ac, one of the top high school lacrosse leagues in the nation.

A Downingtown native, Peden was arguably the area’s most proficient distributor. He paced the Friars in assists (62) and points (91), and has signed to play at Penn State. The senior was named All-League, All-State and All-American. He scored 29 goals in 2021, and added 29 goals and 32 assists for his previous season in 2019.

The senior had an eye-opening 75 goals in 2021, and added 48 assists for an area-best 123 points. Mehok was the unquestioned quarterback of the Eagles attack and is moving on to play college lacrosse at St. Josephs. “We struggled to score goals this season, except or Owen,” said Shanahan assistant coach Paul Meyers.

The sophomore burst onto the high school scene with a bang, pouring in a school-record tying 62 goals and handing out 17 assists. Seaman is a true throwback two-way midfielder that routinely excelled at all levels. “He took our opponent’s top long-stick in every game and had little issue,” said his coach Kevin Philibin. “He is the best shooting midfielder in the (Ches-Mont) in my opinion.” Seaman scored at least three goals in all but two league contests, and had five-plus in six contests.

The top performer for a squad that was a District 12 semifinalist and PIAA 2A Tournament qualifier. Brown earned first team All-Philadelphia Catholic League honors after scoring 59 goal and notching 21 assists in 2021. A junior, Brown finished as the league’s number two goal scorer.

The senior scored 31 goals in just 11 games in ’21 and was also a ferocious defender. The midfielder also contributed nine assists. “Nick was always covered by a long-stick middie and was our team’s main initiator on offense,” said his coach Steve Holmes. Farrell has signed to play Division I college lacrosse at Long Island University.

Statistics alone can’t accurately quantify how much this senior meant to the Eagles. He amassed 14 goals and 10 assists, but was also among the area’s premier defenders as well as a wing on face offs. Gucwa earned All American honors, is headed to Drexel to play lacrosse, and has been described by his coaches as a vacuum for the way he almost effortlessly gobbles up ground balls (117). “He is the best ground ball guy around,” said his coach Jon Heisman.

A very cerebral defender, it’s no surprise that Brownley is headed to Harvard to play lacrosse. The Glenmoore native is a 200-pounder with great range and physicality. He registered 41 ground balls and chipped in a goal for Malvern Prep, one of the state’s best teams. Brownley was all-everything, including All-American.

At 6-foot-5, Quinn stood tall on defense for the Cougars. Physically imposing, the junior had great range and was a disrupting presence. He logged 24 ground balls, 35 clears and 21 turnovers caused, and was a first team all-league selection. “Liam is a tough, close defender with great lacrosse IQ and a team-first mentality,” said East coach Joe Horvath. Quinn has committed to play college lacrosse at St. Joseph’s.

A physical and athletic force, Cresci anchored a stout Blue Demons’ defense that surrendered less than five goals, on average, per match. Crecsi averaged four ground balls and two forced turnovers per outing, chipped in three goals, and is headed to Division I Harvard to play lacrosse. “Vince was always assigned to the best opposing offensive player and handled everyone,” said his coach Bob Allvord. “He is like having a coach on the field. His size, stick skills and athleticism separates him from most.”

One of the top back-liners in the Inter-Ac league, Buono is a 6-foot-2, 190-pound senior who is headed to play college lacrosse at Penn State. He was a key defensive standout for the Friars, who won the Inter-Ac title for the third straight season. Buono added a goal and an assist, led Malvern with 59 ground balls, and was named All-League, All-State and All-American.

The junior is a premier faceoff guy, but was so much more for the Whippets. Straub won 239-of-316 face offs, for a success rate of 76 percent, but also delivered 36 goals and 29 assists. He also collected a team-high 175 ground balls. In two seasons at West, he’s prevailed on 440 faceoffs, and has committed to play his college lacrosse at Delaware.

The premier LSM in the brutally tough Inter-Ac league, Frankenheimer is a senior and has signed to at North Carolina. He contributed four goals, four assists and 40 ground balls for the Friars, who went 19-2 despite playing one of the nation’s most challenging schedules. He was named All-League and All-State.

One of the top goalies in the state, Jameison was the team MVP for the Pioneers, who advanced to the PIAA 3A State Semifinals. Just a sophomore, he made more than 200 saves in 2021 and averaged 9.3 per outing. In one of the top public school leagues in the country, Jameison and ’Stoga allowed an average of just 5.0 goals per game against Central League foes. He is a first-team All-Central League pick, as well as garnering All-State and All-American honors.

You could call it a slam dunk, or a no brainer.

“Coach Allvord and his staff just knew how to manage our talent so well,” said senior star Sam Forte. “He is the best. He is like a mentor out there – he takes you under his wing.

“Everything worked out perfectly – the stars aligned.”

In the first season of his second stint as the Kennett head coach, Allvord guided the squad to the program’s first-ever league title. The team also demolished the previous single-season win mark from 13 to 22. The Demons entered the campaign without a single postseason victory, but had five in ’21, including an exhilarating run to the PIAA 3A Tournament Final.

Allvord was first an assistant coach at Kennett in 2007, later became the head coach for three seasons before stepping aside. He came back as an assistant in 2016.
“I don’t know anybody who cares about Kennett lacrosse more than coach Allvord,” Forte added.