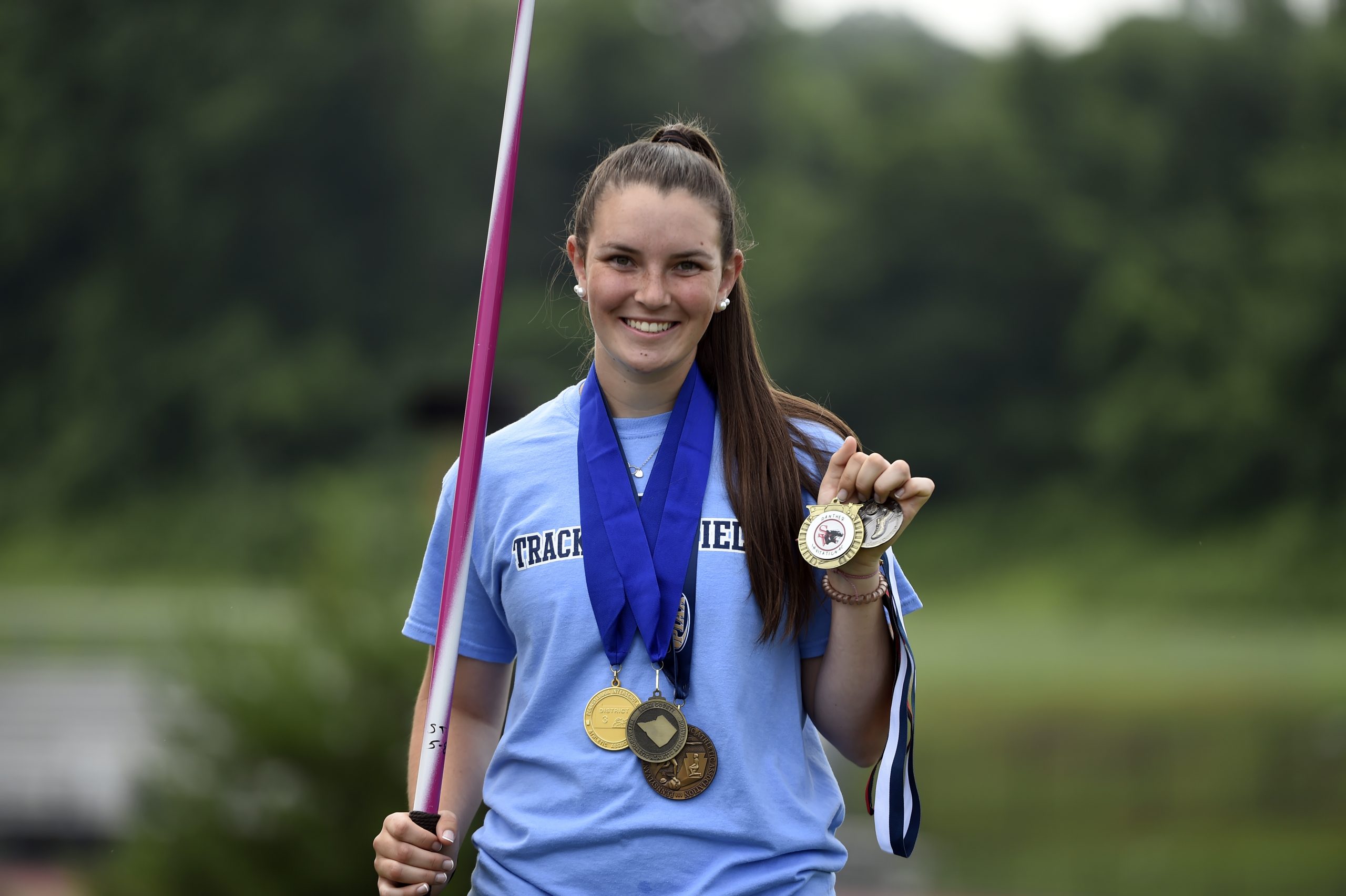 Competing in two sports during the same season? Not as common, but it has already happened.

Not only competing in two sports during the same season, but thriving in both? Even more uncommon.

That’s the unique legacy Hannah Cassner established this spring at Daniel Boone. The senior capped her scholastic career by helping the school’s softball team to a successful season, and achieving success in girls track and field … a level of performance earning her acclaim as The Mercury’s 2021 Female Track Athlete of the Year.

It was a daunting situation, committing the time necessary in pursuit of both sports and not participating in one at the expense of the other. The key for Cassner, obviously, was creating and maintaining an organized schedule with priorities firmly set.

As a catcher on the softball team, Cassner helped Boone go 19-5 for the season, 14-2 in the regular season and 11-1 in Berks play. The Blazers finished atop the league’s Division I standings, second to Twin Valley in the Berks tournament, fifth in the District 3 Class 5A playoffs and in the PIAA 5A tourney, where they bowed out in the first round to West Chester East.

“We wanted to go far … we wanted to be county, district and state champion,” she said.

Cassner was even more formidable on the javelin field. She placed first in every meet in which she participated through the District 3-AAA competition: Duals in the Berks County League’s Division I, the Schuylkill Valley Invitational, the John Shaner Memorial Meet and the BCIAA’s Firing Championship.

Off her gold-medal throw at Schuylkill Valley, Cassner went 134-1 at the Shaner Meet to break a 13-year-old record in the event. A 127-9 at the Firing Meet preceded the 130-5 she reached at districts.

At states, Cassner placed fourth with a 131-4 that was almost a foot longer than her seed throw (130-5). She was inches off the bronze-medal toss of Berwick’s Renny Murphy (131-11) in a competition dominated by Hazleton Area’s Abbey Hengst (135-6) and Mifflin County’s Taylor Ciccolino (133-4).

“She’s almost a natural,” Bob Reismiller, Daniel Boone’s girls head coach, said of Cassner. “The first time I worked with her was as a sophomore, in the winter. You know when you have someone who can throw.”

No less an authority than Steph Sievers concurred with Reismiller’s assessment. A 2015 Boone graduate and seventh-place medalist in the 2014 PIAA meet, Sievers gave high praise to Cassner.

“When Steph came back and saw her throw, she said ‘She (Cassner) can challenge my record,’ When I had her, she put in the time.”

One big part of Cassner’s development was hooking up with Bella Draper, the high-school’s strength and fitness coach who is also affiliated with Kyle Myers Fitness.

“Every week, I wanted to reach a new personal record, improve my speed and agility.” Hannah said. “I’d do lower body work, and work on my mobility and flexibility. I always had the rotation down.

“She said I have a cannon for an arm.”

Though she focused primarily on javelin, Cassner competed in other throwing event to get additional team points. Her sophomore year, she started with shot put and javelin, then added discus.

Softball is Hannah’s first love on the sports scene.

Hannah’s double-dip in spring sports was influenced to a degree by a knee surgery she faced her freshman year. Undergoing physical therapy after the surgery, she was back in playing form in six months.

“My best sport always was softball. Track was accidental,” she said. “In winter track, I was introduced to the shot put. It looked like fun.”

Participating in both sports her senior year was an exercise in time management for Cassner. While participating in almost all Boone’s softball practices, Hannah  worked at track when time was available.

It stood in contrast to her sophomore year when, trying for a more even balance between the sports, Cassner’s playing time in softball was reduced.

Helping her efforts this spring was the cooperation of her coaches: Lee Trythall in softball, Reismiller in track.

“Before, I was half-and-half,” Cassner said. “If the coach believes in you, you want to do better. I looked forward to coming back for my senior year.”

“I knew the situation, that she loved softball,” Reismiller said. “We let her do it because of the kind of athlete she is.”

Still, Hannah faced 2-3 instances this spring where softball games and track meets run together. The support and understanding of her teammates was key to making that all work out.

“The players were good about it (two sports),” she said.

She was also buoyed by the involvement of Camille Hayes with Blazer softball. Hayes coached Hannah when she played for the Pink Panthers youth program between the ages of five and 13.

“When she came back, it helped,” Cassner said.

Hannah had two notable double-dip showings in May, where she came up big for both the Boone softball and track teams.

Before going to the Shaner Meet May 8, Cassner pitched a shutout inning and struck out two in a win over Reading High. On May 18, she hit a two-out RBI single in the bottom of the seventh inning to lift Boone to a 4-3 BCIAA semifinal win over Hamburg.

The walk-off hit came four days after Cassner won the county javelin title at the Firing Meet, and four days before she won gold in the Class AAA javelin at the District 3 Track and Field Championships.

It helped dispel any initial concerns her parents may have had about Hannah playing both sports.

“In the beginning, when I started track. Mom didn’t pile on,” she recalled. “Looking back, she’d say ‘I’m glad you went against my word’.”

Softball will remain Cassner’s sport of choice in the next phase of her athletic career. She has committed to attending Lock Haven University this fall, to play for the Bald Eagles’ NCAA Division II program while undertaking a business curriculum.

To prepare for the step up, Hannah is playing for the Pa. Xtreme 18-year-old program in Collegeville.

While her involvement in scholastic track and field has come to an end, Cassner’s legacy in the sport at Daniel Boone will be remembered by former teammates and other athletes to come.

“A lot of underclassmen watch her and say, ‘How does she do it’?” Reismiller said. “She worked with the underclassmen, trying to help them. That’s all part of being a good athlete.”