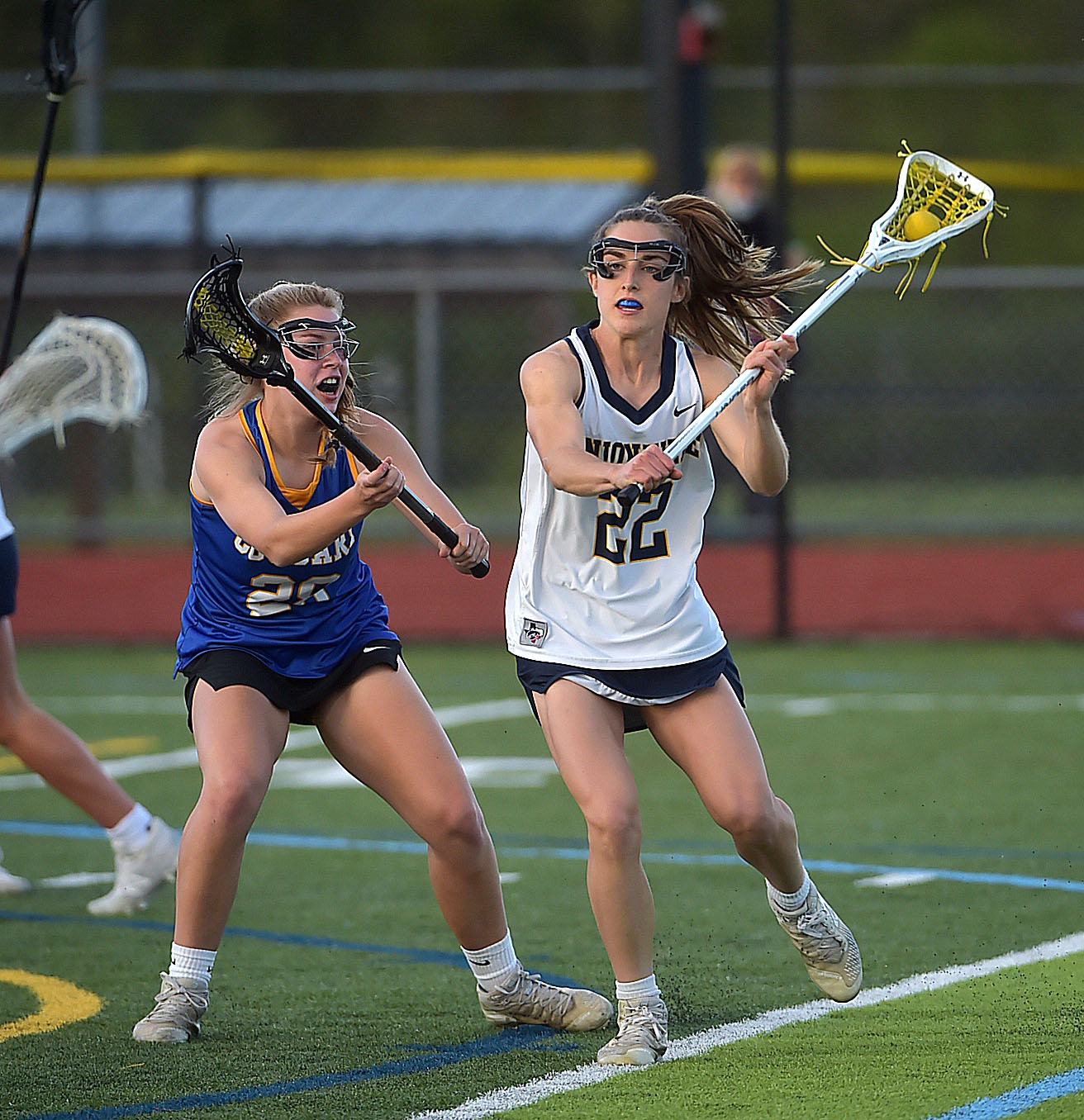 Senior attack was a potent scoring force for the Cougars, scoring 90 goals and dishing out 51 assists. For her all-around standout play, she was named PASLA Most Valuable Player for the Ches-Mont National Division, and received first team All-Ches-Mont League honors. Will play for Monmouth University next spring.

Senior attack scored 66 goals and dished out 68 assists for the Longhorns, while causing 37 turnovers by the opposition and collecting 47 ground balls. Was PASLA Most Valuable Player for the Ches-Mont American Division and a first team All-Ches-Mont League selection. Will play for Coastal Carolina next spring.

Senior attack and tri-captain was a powerful scorer and all-around performer for the Ches-Mont League and District 1 2A champions, scoring 52 goals and dishing out 23 assists. A first team All-Ches-Mont League selection, she will be playing for Rutgers next spring.

Junior midfielder was a potent scorer and strong on the draw control for the Ches-Mont and District 1 2A champs, tallying 59 goals, dishing out 16 assists and winning 64 draw controls. Received first team All-Ches-Mont League honors and is committed to Brown University.

Senior midfielder led the Whippets in scoring with 58 goals despite missing last six games with injury. Was a fine all-around performer who won 45 draw controls and collected 22 ground balls. A first team All-Ches-Mont League selection, she will be playing for the University of Delaware next spring. Received PASLA All Academic honors.

Senior defender ran the Whippets’ tenacious defense this spring, causing a team-leading 38 enemy turnovers (3 per game), collecting 36 ground balls, and making 8 interceptions. A first team All-Ches-Mont selection, she will be playing for Quinnipiac next spring. Received PASLA All Academic honors.

Senior was a potent scorer for the Blue Demons this spring, with a penchant for tallying goals at key moments. Received first team All-Ches-Mont League honors. A fine all-around athlete who will play field hockey for Villanova University in the fall.

Senior midfielder/defender, a first team All-Ches-Mont League selection, was noted for her fine all-around play, tough defense and mastery of the draw control. Will play lacrosse next spring for Ohio State University.

Senior attack was the AACA’s Most Valuable Player and an Academic All-American. Was a potent scorer for a powerful Hurricane squad this spring, tallying 108 goals in 24 games and dishing out 82 assists. Will play lacrosse for Tufts University next spring.

Sophomore midfielder/attack was first team All-Ches-Mont League selection. Was a potent scorer for the Patriots, particularly in the PIAA post-season, as she tallied five goals against Garnet Valley in the District 1 3A playoffs.

Sophomore was first team All-Ches-Mont League selection at goalie. Kept the Patriots in many a game this spring with her standout work in the net.

The Bishop Shanahan girls’ lacrosse team, which captured the Ches-Mont League title and the District 1 2A championship, was coached by Kacy Small, the Daily Local News 2021 Girls Lacrosse Coach of the Year.

“None of this could have been accomplished without the endless hours they put in all year round – they have been here all four years, from Day 1,” said Small. “Their support for the girls and the program is inspiring.”

This is Small’s fourth year of coaching the Eagles, if you count the COVID-cancelled 2020 campaign. In 2018, his first year, the Eagles won the opening round of the PIAA District 1 2A tournament, then the following year placed third in the District 1 tourney.

The Eagles posted a 17-4 overall record this spring.

“This was my first four-year senior class – this year’s seniors were freshmen when I started at Shanahan in 2018,” said Small. “We talked about putting our program on the map from Day 1 in 2018, and we talked about honoring the 2020 seniors this year. Our girls did both of those things this spring – I couldn’t be more proud of them.”

Prior to coaching at Shanahan, Small was the offensive coordinator for the Hill School boys lacrosse team for six years. Before that, he was the Daniel Boone boys’ lacrosse head coach for five years, helping the team advance from club status to a varsity program.

Small started coaching girls’ lacrosse during his time at Hill School, coaching a girls’ club team, 380 Lacrosse, during the summer and fall.

He played in the 2014 FIL World Championship in Denver as captain of the Thailand National team and has been a six-time speaker/presenter at the US Lacrosse National Convention.

“We’re building a program at Shanahan based around culture,” said Small. “We’ve got great players, great parents and great people.”