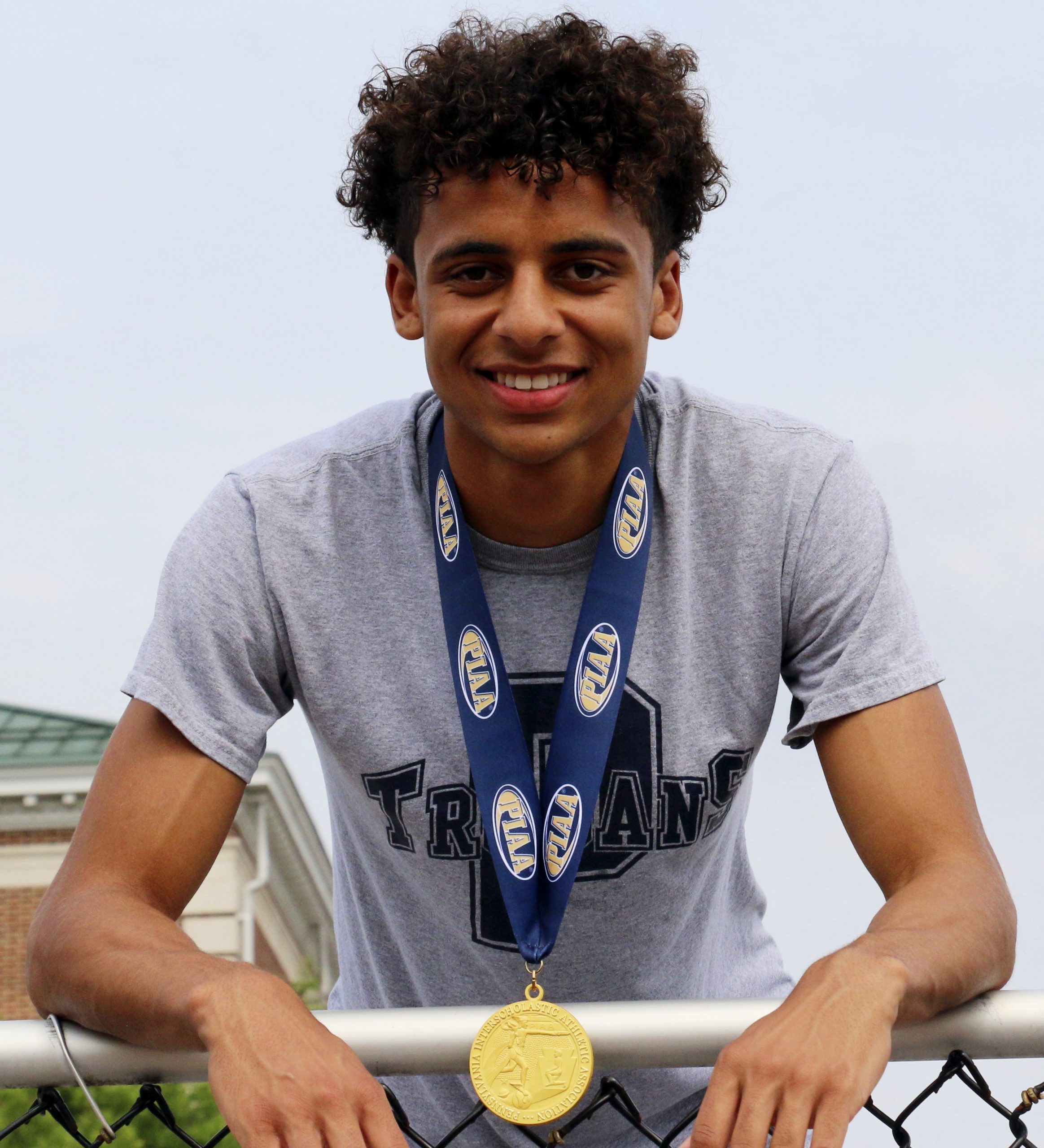 It’s a record all his own.

And an achievement more than worthy of the rich legacy of the track and field team for which he competed.

Darius Smallwood capped his scholastic athletic career at Pottstown by ascending the loftiest of heights this spring. The Trojan senior stood on the top step of the medal stand at Shippensburg University after winning the PIAA Class AAA 800-meter run one month ago … an accomplishment that also cemented his selection as The Mercury’s 2021 Track & Field Male Athlete of the Year.

It was an encore performance for Smallwood, who had been named The Mercury’s 2020 Runner of the Year in boys cross country last fall. And his record-setting run put Darius in the company of a Pottstown middle-distance star from almost a half-century earlier.

His standard in the 800-meter run — a 1:51.91 clocking that got Smallwood his PIAA gold medal — was compared to the 880-yard mark belonging to Bruce Carter. A runner at Pottstown during the 1962-63 seasons, Carter’s top time in the 880 was 1:52.6, more than a half-second behind Darius’ record, and praised him at a get-together the Sunday after states.

“He said, ‘You didn’t just beat my record, you destroyed it’,” Smallwood recalled.

He and Carter are bound by more than just their spots in the Pottstown track record book. Darius’ mother (Stacy Steele) and Carter’s daughter (Sheree Carter) were teammates on the Pottstown girls track team during their scholastic days.

Smallwood’s state championship was sweetened by a not-so-sweet outing in the District 1 meet a week earlier at Coatesville. The top seed in the event, he ended up third behind Garnet Valley’s Eric Albright (1:53.57) and Central Bucks East’s Holden Emery (1:55.05) with his own time of 1:55.05.

“It gave me a lesson … taught me a lot,” he said. “After districts, I knew I had to take the lead and run my race. I was super serious, going for it all.”

“It was a learning experience for him,” Pottstown head coach Justin Gibbs added. “Darius knew he had to run his race (at states).”

Pottstown’s Darius Smallwood poses with his state gold medal on the track at Pottstown High School. (Rick Martin – For The Mercury)

He did just that, taking the lead at the start and not yielding it the entire way. His record-setting time earned Darius the satisfaction of outrunning Emery (1:53.26) and Albright (1:53.85), a respective second and fourth around third-place Tommy Bildheiser of Cedar Crest (1:53.73).

“My plan was to not let anyone in front of me,” he said. “I listened for breathing and footsteps, saw them come up to my shoulder.

His heightened perspective on the state-meet venue also helped push Smallwood toward greatness.

“It was different. Everybody is good,” he said. “I knew I had to rise to the occasion. That pushed me.”

He got a taste for pursuing records during Pottstown’s PAC Frontier Division dual meet with neighboring rival Pottsgrove. With his chase of the program record (1:52.6) announced over the public-address system, and teammates and fans alike cheering him on, Darius made a strong run at the record.

He came up just short, clocking a 1:52.79. But the possibility of making a record run was firmed up at that time, as was his resolve to make the most of the competitive opportunities this spring.

“There were not many invitationals,” Smallwood said. “I just went 100 percent, all out. I mostly set personal records every race.”

“The only time he changed routine was districts,” Gibbs added. “In training for the season, the 800 was his main focus.”

He also ran the 300 intermediate hurdles and the anchor leg as part of 4×400 relay team.

In looking to compete in track at the collegiate level, Smallwood had two high-level meets on his summer schedule. He participated in the Garden State Track Club East Coast Championship June 23-24, and the National Scholastic Athletics Foundation Outdoor National Track Meet from June 30-July 3 in Oregon.

At the East Coast Championship, Smallwood made a strong showing in the 800, placing fourth in a time of 1:51.96. The race was won by Jeremy Hernandez of Hoboken (N.J.) in 1:50.94, followedy by Myles Plummer of Scotch Plains (N.J.) and Matthew Kraus of Warminster (Pa.).

“He just ran in the Olympic development race’s second heat,” his mother messaged from the meet. “He ran another 1:51.9, placing first in his heat and fourth overall.

“We thought he was running in the high school boys race, and they bump him up to that race, so he didn’t have much time to warm up. Maybe 10 minutes.”

Smallwood then earned national honors at Outdoor Nationals with a time of 1:52.55 in the 800 meter race that placed him sixth in the nation.

Smallwood finished less than one-tenth of a second behind fifth-place Darius Kipyego of Warwick, R.I. (1:52.46).

Penn State is on Smallwood’s short list of college choices. He would like to run indoor and outdoor track for the Nittany Lions.

For his part, Gibbs feels Smallwood can maintain his standard of success at the collegiate level.