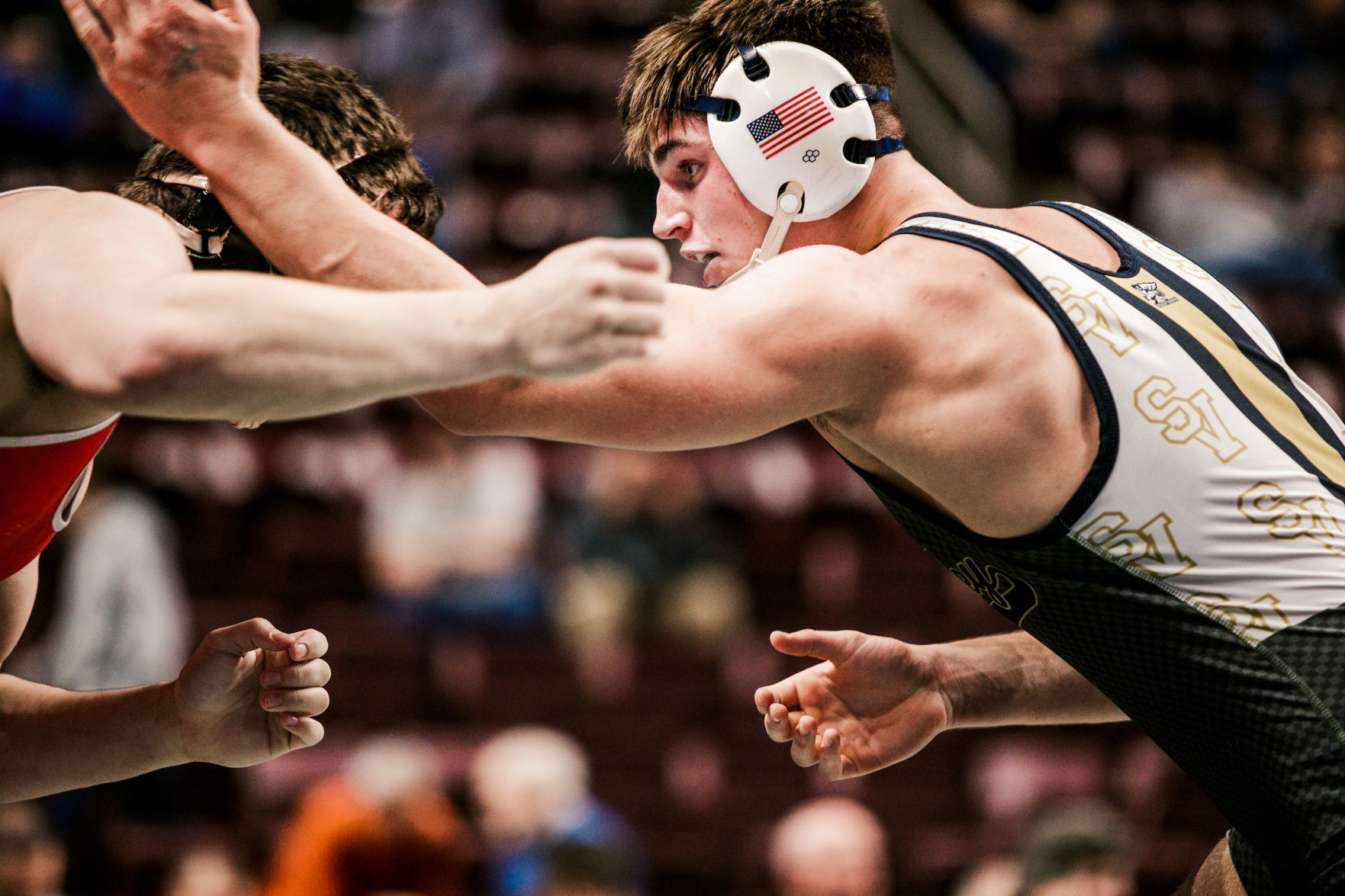 Sun Valley's Ryan Catka, right, is shown competing as a junior competing at 195 at the 2020 PIAA tournament.

Each summer Ryan Catka spends a week with the family on a lake in North Carolina.

No TV, no internet, just family, including the unique sarcasm of older brother Hunter.

That’s the longest Catka, the reigning Delaware County Daily Times wrestler of the year out of Sun Valley remembers being without TV, the internet, movies or music as he approaches basic training next week at the U.S. Naval Academy.

In a six-week period that starts after Catka is inducted into the Naval Academy Class of 2025 on Wednesday, all those necessities will be off limits and cell phone use almost completely restricted.

“I think that’s one of the biggest things I’m looking forward to actually,” Catka said. “I think it’s going to be a great time for me to really dial in and focus on myself and focus on schooling with the Navy.

I think that will be really beneficial for me.”

Plebe Summer, as it is called, includes rigorous physical and intense academic training. It’s not just a job, it’s an adventure. Catka is among 1,200 candidates chosen from more than 16,000 applications.

Catka is eager to get into the physical nature of boot camp. He’s pushed himself in a variety of old school workouts since he’s been a kid. Much of the time he was competing with his older brother, now on a wrestling scholarship at Virginia Tech.

Catka, third in the state at 215 pounds, also will wrestle at Navy, where he already knows a couple of his fellow plebes who also wrestled. Dayton Delviscio (Malvern) lives five minutes away from Catka, who resides in Brookhaven. Delviscio attended the Navy Prep school, as did A.J. Tamburrino (Hatboro Horsham). At some point Catka and Delviscio will split the gas charges on the two-hour drive home.

The boot camp restrictions will make that routine seem like a privilege for Catka, who figures the last time he’s been without internet is eighth grade, when he got his first phone. Then again, that lake in North Carolina is his happy place.

“You miss that stuff at first but then you really get to spend some quality time with family and stuff, and you get creative with what you do for fun,” Catka said. “I really enjoy life without the internet for a little bit. Being away from family will be tough but I’ve always kind of been ready to live on my own. I think the biggest fear is just kind of the unknown of what’s to come but that’s also the beauty of it. Living one day at a time and going with the flow and doing the best I can to make a good future for myself. I don’t really have any big fears going into this. I’m really excited and really happy with my decision.”

If anybody can power through the restrictions, it’s Catka. He might not need all three of the calls he gets during the six-week boot camp.

“Definitely I’m calling my momma,” Catka said. “And my dad will be there. Probably my girlfriend. And then, I don’t know, probably my brother.”

Ward is a product of Kingsway Regional High School and Jill Lewis Ward, his mother, who played softball at Interboro High in 1994.

Lewis Ward also is varsity softball coach at Kingsway Regional, who guided the Dragons to a 23-2 record this season and a trip to the semifinal round of the New Jersey Group 4 state tournament.

“I am just one proud mother and grandmother,” wrote Kathryn Lewis, who experienced that shining moment Thursday at CBP.

A lot of changes in sports jobs over the past fast weeks.

Local sports lost a lifeline when Steve Moore, the sports editor at the West Chester Daily Local, had his position eliminated.

Nate Heckenberger, the wrestling writer, photographer and contributor to the Daily Local in a tweet called the move a “Huge loss for high school sports coverage in ChesCo.”

Heckenberger described Moore as a “huge advocate” for local sports and applauded “the dedication and respect Steve had for documenting the hard work and accomplishments the local athletes put out.”

Moore’s farewell column can be found on papreplive.com.

On the Eagles’ beat I’m going to miss Paul Domowitch and Les Bowen of the Inquirer, who were always there to help a colleague out. Both accepted buyouts.

Domo and I are on our seventh head coach together on the beat, and I’m going to miss his storytelling. The same with Les, in his North Carolina accent. None finer.

Here’s hoping the next wave of writers/reporters in these parts is more substance than sizzle, as these pros are.