MOORE: The Kids Are Alright: A fond farewell, and a plea for the future of local news 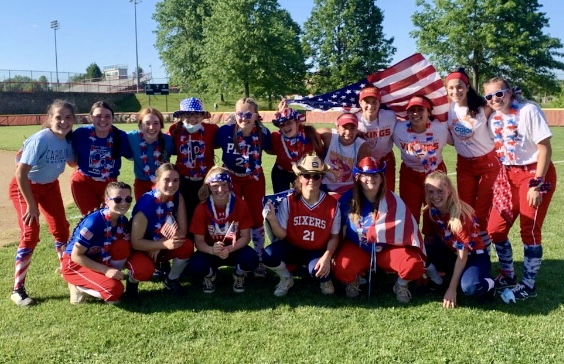 Kennett boys basketball seniors celebrate at the end of their season. (PHOTO PROVIDED)

Kennett softball players share a laugh on the bench during a playoff game this month. (PHOTO PROVIDED)

West Chester Rustin baseball players trade in their uniforms for formalwear at the prom. (PHOTO PROVIDED)

For weeks, I’ve been writing a column in my head, celebrating the high school athletes of 2020-2021.

These young men and women endured the strangest 15 months in any of our lifetimes with style, talent, excellence and pride, even as many watched 25 percent of their athletic careers vanish into thin air.

Through it all, each and every one of them tackled the next challenge without complaint, showing maturity and grace that should make most of their parents proud, and embarrass some of the other so-called “adults” who spent a year and a half searching for someone to blame.

Many of the next 1,500 or so words will be dedicated to these kids. But last Thursday, this also became a farewell column for yours truly, after hearing five words uttered far too often in this business for the last decade:

“Your position is being eliminated.”

Aside from a one-year detour into the non-journalism world (I hated it), I spent my 16-year professional career covering high school sports in Pennsylvania. My desks were in Williamsport, West Chester, Pottstown, Norristown, and West Chester again. For the last few years, I’ve spent more time at my kitchen table than on the sidelines.

Whether it was a softball field in Minersville (my first assignment), a football field in Loyalsock (my first football game), a golf course in York (my first state championship), or a jam-packed Kottmeyer Stadium in 2017 for the best game I’ve ever seen (Coatesville 38, Downingtown West 27), I have loved every minute spent bringing these stories to all of you.

It seems fitting that the last project I will put my hands on is our 2021 Spring All-Area series. Our All-Area teams are my favorite thing we do each year. Our incredible writers spend countless hours trying to put every name in the right place and double-checking every stat. Photographer Pete Bannan — one of the most talented sports photographers I’ve ever known — travels all over the county to get perfect portrait shots of our athletes of the year.

The 2021 Spring All-Area series is extra special, since these are the athletes who lost an entire season in 2020, when we named every single Chester County senior athlete to our first teams.

I won’t be around to see the release of this season’s All-Area, but my colleagues who remain will continue to put all of their energy into these kids. And they could use your support.

After just one tweet, the pictures piled up in my inbox like discarded masks in the parking lot.

Unionville basketball players smiling behind their masks and making the (new-to-them) “Hook ’em” hand signal of the Longhorns. Kennett softball players yukking it up in the dugout before a playoff game. The West Chester East softball team wearing stars and stripes for a Memorial Day practice.

These were not pictures taken by talented photographers like Pete. These were behind-the-scenes “candids,” probably taken on an iPhone, that weren’t about winning or losing.

For these kids, getting back on the field wasn’t for trophies or banners in gym rafters, but for one more day with teammates and friends.

Along with incredible reporters like Neil Geoghegan, Bruce Adams, Bill Rudick, Pete DiGiovanni, Nate Heckenberger, Bryan Davis and Sage Hurley, we interviewed hundreds of athletes over the last year, whether by phone, Zoom, or shouting questions from a safe 10 feet away.

Not once did we hear a complaint.

What we did hear were athletes thrilled to be with their teammates. Thrilled just to play. Thrilled to wear their school’s colors one more time.

For some of them, the cry of “LET THE KIDS PLAY!” was clearly not the point.

When the rules did allow for competition, but not for fans in the stands, suddenly “letting them play” wasn’t good enough. When masks were required on the field, it was “kids are going to pass out!” And after saying the right things about being grateful just to get games in, some coaches bent every rule in the book to help with playoff seeding.

All the while, the kids themselves — the ones this entire adventure is supposed to be about — did everything right. They said the right things, did the right things, and made us proud to showcase their stories in The Daily Local News and on Pa. Prep Live.

I can only hope more adults can follow their lead.

When I packed up my journalism diploma and moved from Boston to Williamsport, my only experience with high school sports was a few seasons as a mediocre varsity golfer and tennis player at Plymouth Whitemarsh High School.

I viewed it as the first step in a career that would give me a Super Bowl press pass, and maybe a byline in the Philadelphia Inquirer or Sports Illustrated.

But in recent years, as I tried to help young writers from my editor’s chair, I often told the story of a hot August night in 2005, when I sat in the bleachers at Loyalsock to cover my first football game. I was too scared to ask for a seat in the press box.

I had absolutely no idea what I was doing.

There is no other career where you start with the toughest single assignment there is. If you can successfully keep stats, conduct interviews, write a story, and type up a boxscore for a high school football game — and still make deadline — you can do anything in this business.

It didn’t take long to realize that covering high schools didn’t have to be a stepping stone to something “bigger.” The people who make a career out of this do it because they love what it is, not what it could lead to.

That segues nicely into the list of people I need to thank, starting with Williamsport Sun-Gazette writer Chris Masse, who was the first colleague to show me that pouring everything you have into high school sports can be the culmination of a great career, not simply a first step.

I had the honor of working for late Pottstown Mercury sports editor Don Seeley, who will forever be a legend in his corner of the world and beyond, and who taught me so much in his too-brief time on this Earth.

And while they were not “sports” colleagues, I worked for and with some amazing people who understand the importance of local newspapers, including Nancy March, Evan Brandt, Frank Otto, Brandie Kessler, Bill Jermacans, Dan Sharer, Dave Markowitz and Tom Murray.

Last but not least, I could not have been successful in my final act as sports editor of the Daily Local without my too-small — but incredibly dedicated — team of Neil Geoghegan, Bruce Adams, and Pete DiGiovanni. Not to mention freelancers like Nate Heckenberger and Bill Rudick, who are invaluable parts of this team. The willingness of all of them to adapt in an industry that isn’t quick to do so, is second to none.

Many of these folks will still be doing their thing after I’m gone. And more than ever, they need your support.

Of course, I need to also thank my wife for her love and support of this very strange career of mine, and for holding down a much more stable career that allowed me to stick with it. Not to mention for putting up with me, especially over the last 5 years, when I’ve worked from a few feet away on the couch much more than she ever probably planned for.

Local news is dying a fast and painful death all across the country. Whether it’s because of tight pursestrings, disappearing advertising sales, Facebook, the internet, or all of the above, it’s a problem that is already affecting our communities.

Coverage of a high school basketball game may not seem like it rises to the same level as exposing political corruption or fairly covering local elections, but it still creates a sense of community that is irreplaceable.

It’s something you may not fully appreciate until your local newspaper disappears.

One of my favorite assignments in my college journalism classes was when a professor made us walk around the Boston sidewalk and find a “normal” passerby to write a story about.

I took that to heart over the last 15 years, especially when we hit a slow stretch and were in search of an interesting story. You can point at a roster, pick a name, and find a story worth telling. If it’s an NBA or NFL roster, that story may have already been told. But when it’s a high school softball roster, you never know what you might find.

The photos submitted with this column are a perfect example of that, and the reason why I will always remember my time in the high school sports world fondly.

I may not be working here any longer, but I will be keeping the subscription to my local newspaper, and supporting those who remain in any way I can. It’s up to all of us to save local news, and be sure it remains a key part of our communities for decades to come..

If the kids I have met along the way are any indication, the world will be a better place when we put it in their hands — or they take the reins and save it themselves.

Steven Moore was sports editor of the Daily Local News for the last five years, and a sports writer/editor for MediaNews Group for nearly 15 years. Follow him on Twitter @smoore1117.