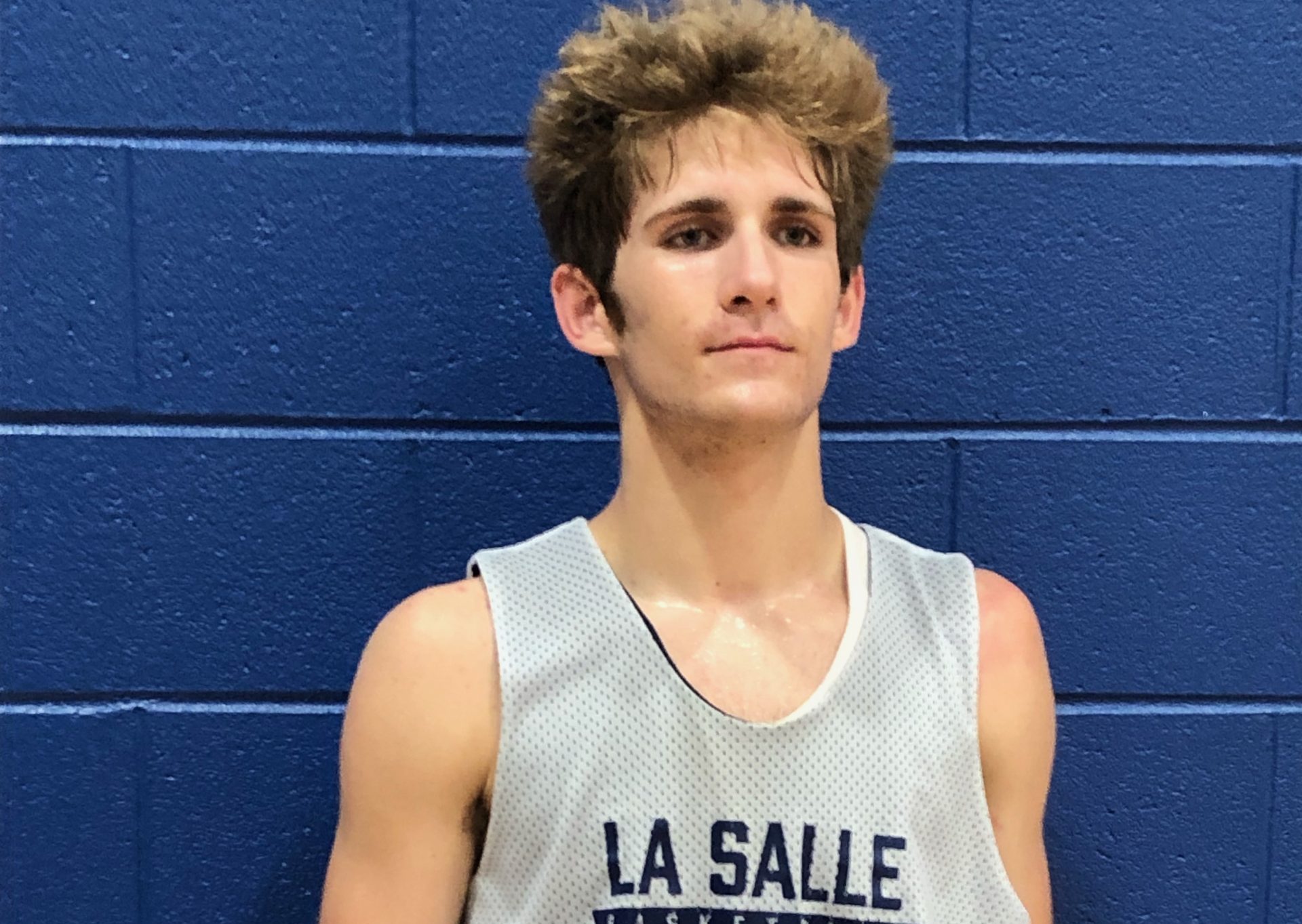 It was a Tuesday night in late June, but the La Salle rising senior guard and his teammates were going as hard as they would in the middle of PCL season. The same was true across the court, with Plymouth Whitemarsh giving the same effort it would trying to pick up a win in a crucial SOL game.

Varano played with a competitive fire and got what he wanted, hitting the game-winning three as La Salle topped PW 41-40 in the semifinals of the Colonials spring basketball league.

“That was a crazy game, so I feel great right now,” Varano said just after stepping off the floor.

The guard, who thrived as a knockdown shooter for the Explorers as a junior, did it all offensively for La Salle on Tuesday. Varano finished with 25 points and four 3-pointers including the game-winner. Just as visible was the increased amount of time the ball was in his hands coming up the floor and in the halfcourt.

La Salle, which went 9-5 in the shortened 2020-21 season, returns a solid nucleus for fourth-year coach Mike McKee. Rising senior Sam Brown, a Rutgers recruit at running back, Varano and rising juniors Horace Simmons and Caleb Bryant are back as likely starters.

After not having an offseason at all in 2020, the mix of experience and opportunities to get in the gym is only a benefit for La Salle and other teams in the area.

“We’re very grateful for all this,” Varano said. “It’s been so fun the past couple months, especially playing all these teams from other leagues, seeing new faces and styles. Like here, we’re playing Lower Merion and PW, I always love playing those guys and we didn’t get a chance to play any of them last year.”

On top of PW’s league, the Explorers are taking part in the Philly HS Live event that took place last weekend and again this coming weekend at St. Joe’s Prep and as usual, they are fielding a team of younger players in Dock Mennonite’s summer league.

Tuesday’s competitive fire was fueled a bit by a meeting with PW this past weekend. The Colonials handed La Salle a double-digit loss at Philly HS Live and the Explorers wanted to put on a better show against PW’s aggressive defense.

“A team like that, it prepares us for the PCL,” Varano said. “Every team in our league is going to be up in us just like they are, so it’s one example of playing a team that really helps us for when it counts.”

McKee told Varano shortly after the season ended he envisioned the rising senior as a lead guard next year. Varano couldn’t have asked for a better test, facing PW’s cadre of fast, athletic and disruptive guards and held his own, getting his shot, finding others, going to the rim and moving once he gave up the ball to keep the offense moving.

Tuesday’s game was a good one, with La Salle leading most of the way and opening up an eight-point lead late before PW turned it up. The Colonials, sparked by their defense causing turnovers and some clutch outside shooting, took a 40-38 lead on rising sophomore Jaden Colzie’s three with 24.9 left.

The Explorers ran a set that got Simmons a look from three. His take didn’t go, but Bryant was able to haul in the offensive board and got it out to Varano on the left wing, with the senior hitting the deep look to go up by a point with 5.3 on the game clock.

“Our defense is probably the thing we’ve most improved on since the start of this league,” Varano said. “We have a lot of young guys with us, they’re young, athletic, long, all that stuff but they didn’t really know the concepts that our seniors knew last winter.”

As a senior and expected leader, Varano said it’s important he treats these summer games seriously so his younger teammates follow suit and he was happy to see everyone on the La Salle so invested in the outcome Tuesday. The Explorers will face Devon Prep on Wednesday at 7 p.m. for the league title.

BUSY COLONIALS >> PW rising senior Marshall Baker loves being in the gym, so he’s got no complaints about the Colonials’ busy start to the summer.

On top of their own league and individual players’ AAU schedules, the Colonials are also taking part in the Philly HS Live event. After a 2020-21 season where they earned a top three seed in the District 1 6A tournament but dropped their opening postseason game, the Colonials are eager to make the most of their offseason reps.

“The quarantine really messed everything up last year, not being able to see these guys, so it just feels good to be back with them all summer,” Baker said.

The guard, who made his mark as an impact player off the Colonials’ bench last season, said it has been a bit of an adjustment with so many games in a short time. Like his teammates however, Baker loves the grind and most of them found a way to get shots up or work on their game last summer anyway.

PW returns a solid amount, especially in the backcourt with rising sophomore Jaden Colzie joining to-be seniors Baker, Zende Hubbard and Taji Hubbard and junior wing Qudire Bennett. An undefeated start last winter was soured by a couple late losses in the regular season before the postseason and the returning Colonials are using it as motivation.

“Really, we just have to stay humble,” Baker said. “We lost a couple seniors, so everyone has to stay ready. We have to step it up and some of our young guys need to be ready to step in. It was really a measuring stick to see where we were at and how we could compete with the best talent around.”

Baker also said the summer is a good time to instill the winning attitude into the players the Colonials will need come the winter when preseason starts.

“We take pride on being a defensive team,” Baker said. “We want to have that kind of good energy and let it help us get back in games when we fall behind.”