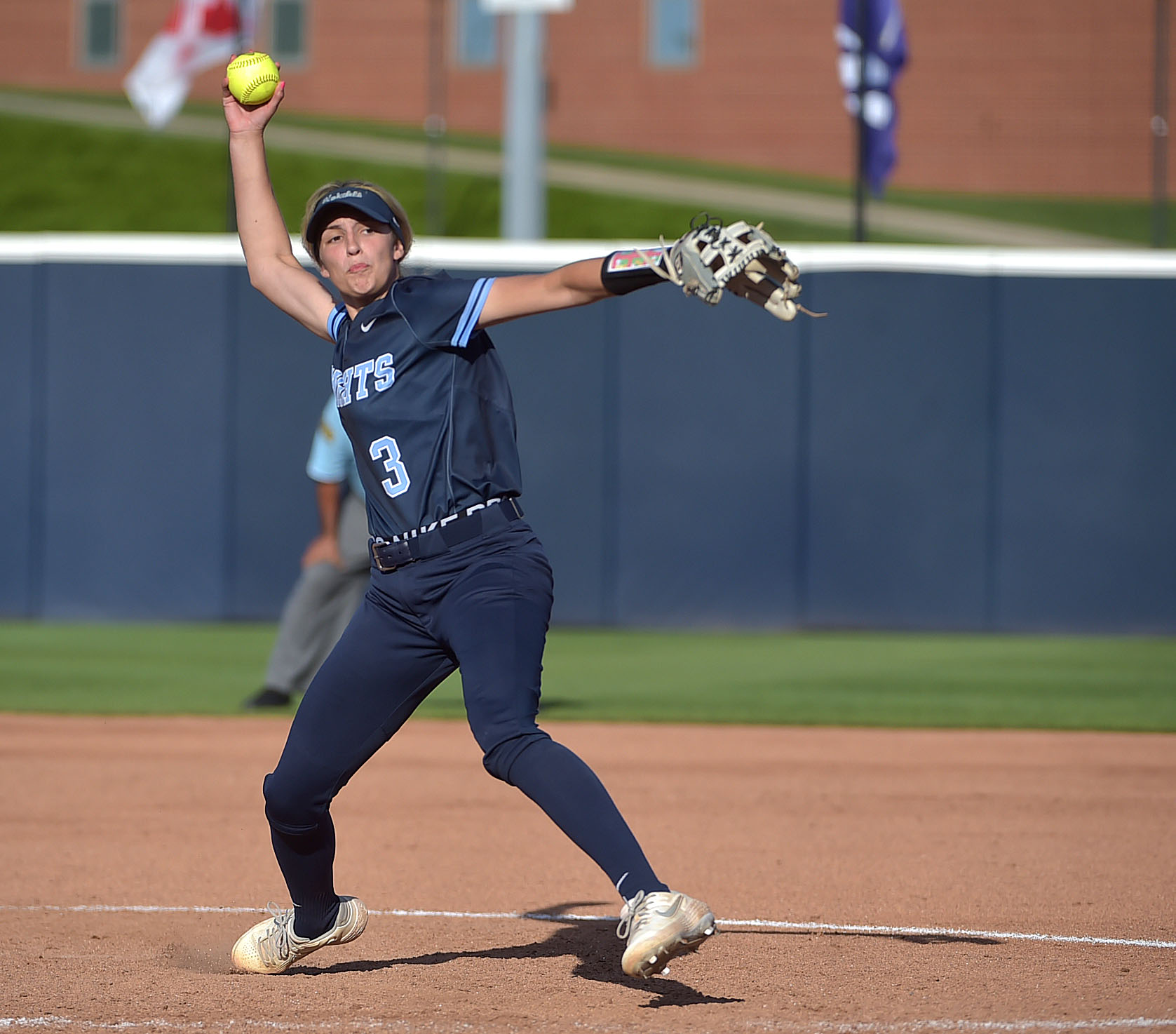 North Penn pitcher Mady Volpe was lights-out terrific as the Knights went on to a 11-0 victory in the PIAA 6A championship Thursday, June 17, 2021 at Beard Field at Penn State University. (Pete Bannan/MediaNews Group)

STATE COLLEGE >> It was early, but Mady Volpe knew it was a big out.

The North Penn senior rang up her fifth strikeout of Thursday’s PIAA Class 6A title game to end the third inning against Haverford and let out a yell as she started back to the dugout. Just four innings later, the right-hander would be right in the middle of a dogpile of Knights players in the pitching circle, officially a state champion.

Volpe tossed yet another postseason gem, holding the Fords to two hits and ending her career with a 42-inning scoreless streak in North Penn’s 11-0 victory.

“At that point, I was like ‘we’re winning this,'” Volpe said, state medal around her neck at Penn State’s Beard Field. “There was no going back from there. I’m so happy, I’m at a bit of a loss for words right now.”

Volpe finished with seven strikeouts, a solid number but not a particularly high one for her. Thursday, the punchouts served more as exclamation points with the Knights defense flashing the leather in all sorts of ways behind their senior ace and making her job a little easier with each passing out.

The team captain’s goal was for her team to score first. North Penn did that, giving her a run to work with after the top of the first and only adding on as she continued to send the Fords back to their dugout with nothing to show for their efforts. Aside from two hits to Haverford leadoff batter Brooke McKeown and four walks, Volpe didn’t give up much and when she did, her defenders often got rid of the runners anyway.

“It made us want to work even harder,” Volpe said. “Our defense was fantastic after that one game. We didn’t give up one run in the state tournament, which is unbelievable. It’s unheard of.”

North Penn’s last loss came on May 27 when the Fords knocked the Knights off 5-0 in the District 1 tournament. That was also the last time Volpe would give up a run as a high school pitcher when the Fords’ Kerri McCallum took her out of the park on a leadoff home run in the fifth inning.

The final two innings of that loss kicked off a defining streak for Volpe that went on the next six games and the entire state tournament. Aside from a five-inning run-rule win in the state semis, Volpe also went the distance in each of those games, totaling 40 straight scoreless postseason frames after the two that ended the Haverford game.

“Honestly, it’s just unreal,” Volpe said. “I’ve been going to my pitching coach, Joe Ferguson, a lot and it’s been life-changing. He changed my view on softball, he’s without a doubt the best pitching coach I’ve ever had so I have to give a lot of props to him.”

The senior also worked hard to improve her hitting, spending much of the season as the Knights’ cleanup hitter and finishing with an average above .300.

Volpe departs for Coastal Carolina as the most decorated pitcher in program history. Her season ERA was 0.71 going into Thursday’s game and only went down and she finished her senior year with 26 wins, 335 strikeouts and the team’s first state title since 1985.

Despite not having a junior season, Volpe punched out more than 600 batters in her time at North Penn, helped the team to three state playoff appearances, struck out 22 batters in a single game as a sophomore and later that year, went toe-to-toe with a future Division I senior in an extra-inning state playoff classic.

That player, Central Dauphin grad and now NC State hurler Sam Gress, was so impressed by Volpe she asked the North Penn pitcher for a photo. The two struck up a friendship and Monday, when Volpe shut out Canon-McMillan in the state semis, Gress was there to watch.

Volpe thanked Knights coach Rick Torresani and her dad Joe, who caught a lot of practice sessions for her, as well as the rest of her family and teammates for standing with her this season and before.

All season, the goal was to win a state title. Shutting out everyone standing in the way of that was just a well-earned bonus.

“It means a lot to me personally, ending on this high note but I’m also so excited to see where this program will go,” Volpe said. “There are amazing underclassmen, it’s going to be crazy and I’m excited to watch them.”

EXTRA BASES >> The Knights got a special shoutout Thursday morning.

Buffalo Bills head coach Sean McDermott, who grew up in Lansdale and spent his high school time between North Penn and La Salle, taped a short message for the team Thursday. McDermott, who led the Bills to the AFC Championship Game, urged the Knights to keep believing in themselves and to finish out their quest for a state title.

“My dad is really good friends with (McDermott) and he said he’d make a video for us,” third baseman Annabelle Smink, who McDermott name-dropped to open the video, said. “It was cool to see him do it for us. I definitely enjoyed it.”

“That really got our energy going too,” senior second baseman Rachel Lowry added. “It was really cool.”

The entire Knights dugout was fired up when senior Marissa Palumbo got called up to bat in the top of the seventh. Palumbo, who only had four plate appearances and appeared in 10 games this season, wasn’t a starter or offensive force but she embraced her role as a energizer and supporter on the bench.

With each pitch she took, her teammates hung on, hoping for a hit. Palumbo didn’t get it, but the fact her teammates were so invested said a lot about the Knights’ chemistry.

“The jell we have as a team, it’s so good,” Lowry said. “It’s something we’ll have with everyone on the team and that I’ll never forget.