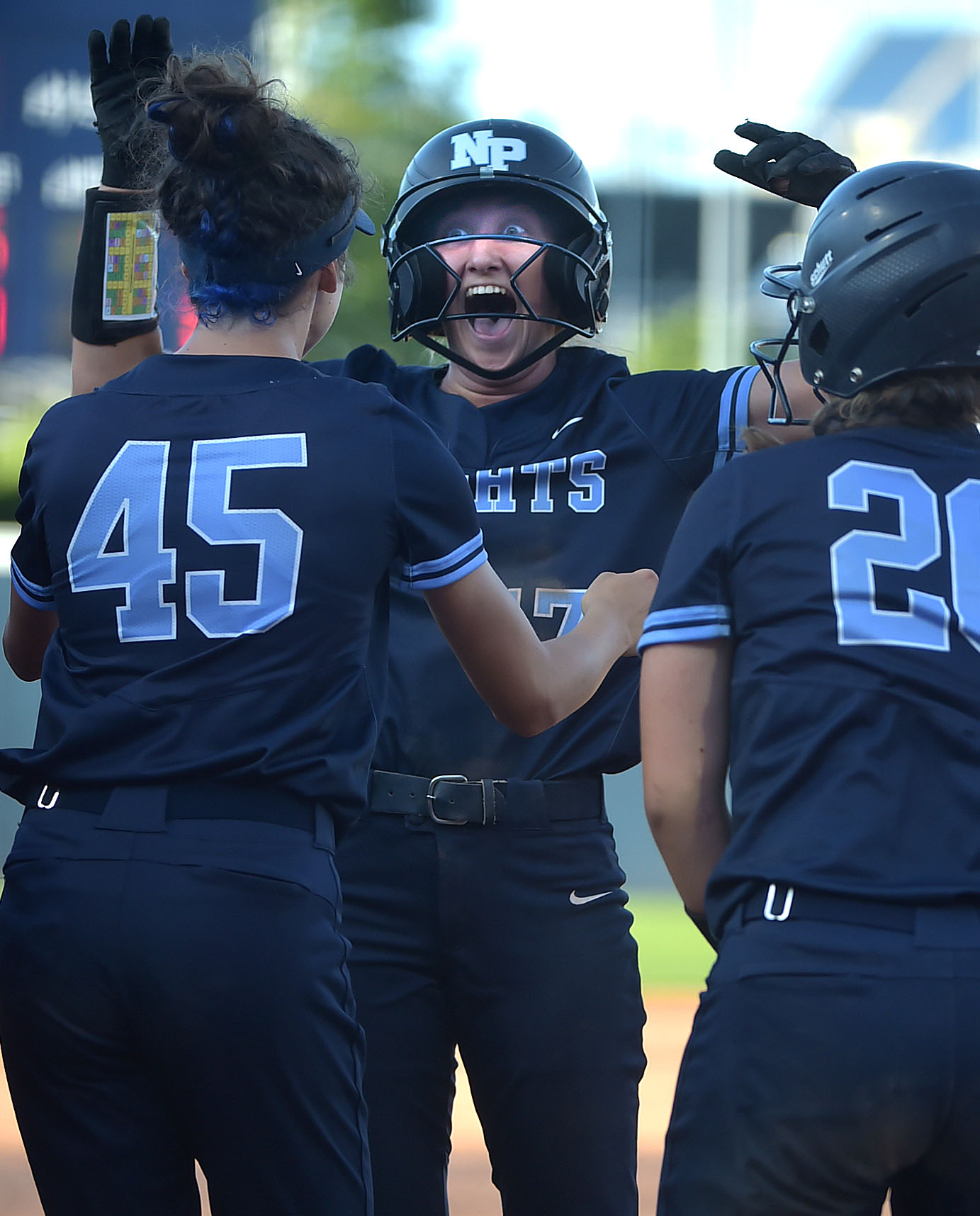 The array of Big Ten flags adorning the outfield wall at Penn State’s Beard Field had the perfect view as the North Penn standout sophomore crushed a pitch in the top of the sixth inning Thursday. Shearer’s hit several home runs this season, but the venue, the significance of the stage and just how hard and far she had belted it had a different feel.

It was the crowning moment on a big day for the outfielder, who led North Penn’s offense in the Knights’ 11-0 PIAA 6A state championship win over Haverford.

“I was just so pumped,” Shearer said. “Hitting a home run in the state championship game, it just felt great. I was so excited, I just wanted to get everyone else hyped up too.”

Shearer’s final line read like a career day, with the outfielder going 2-for-3 with four RBIs and four runs scored plus a pair of walks. In fact, it was her leadoff walk in the top of the first inning that set the tone for the entire day offensively.

In their meeting during the District 1 tournament in May, Haverford ace Emma Taylor had frustrated the Knights’ entire lineup in a 5-0 loss. With North Penn designated the away team Thursday, Shearer got the first crack at some redemption but the sophomore wasn’t going up trying to bomb one out of the yard right away.

Patience is a virtue and its one the outfielder had plenty of, working up to a full count before drawing a fourth ball that sent her down to second. A few pitches later, she was sliding into second on a steal, then took third on Sarah Sabocsik’s sac bunt and scored on Annabelle Smink’s RBI single.

“We knew her plan, so we had to make our own plan and adjust to her,” Shearer said. “We knew she would go all outside and all high, so we made the adjustments and hit the ball where it was pitched.

“I was trying to get a ball to hit, she didn’t give it to me and it seemed to start a little piece of momentum that eventually carried into Annabelle’s hit and even further innings.”

Shearer’s stats heading into the state final were eye-popping in their own right and part of the reason why the sophomore, who plays club ball with Newtown Rock Gold, was ranked in the top 30 of her class by ExtraInningSoftball. This spring, with Thursday’s official box included, Shearer hit .568 (50-for-88), scored 40 runs, drove in 23, had 11 doubles, four triples and four home runs.

She started her high school career 11-for-11 and even her first out, which came four games into the schedule, still drove in a run.

Walking into Beard Field and taking in the high, padded outfield walls, the pristine grass and infield, press box and bleachers wrapping around the base lines was like a glimpse of what’s to come.

“It was amazing, I walked into the dugout and I was speechless, this is a once-in-a-lifetime thing and that’s all I’ve been saying to myself this whole week,” Shearer said. “It was incredible and I hope to do it again someday.”

Shearer’s second walk on Thursday also produced a run with the leadoff hitter working a bases-loaded free pass to score North Penn’s second run. Her third at-bat got a run in on an infield error but still without an official hit when she stepped in with one away in the top of the sixth, Shearer wanted to let one fly.

She took two balls before letting go a mighty swing for a foul ball that made it 2-1 in the count. She didn’t miss on her next hack, ripping it well over the 220-foot fence in right center and between a couple of those Big Ten flags.

“I could tell her plan and what she wanted to throw to me so I was just adjusting,” Shearer said. “I was getting off the plate, turning on the inside pitch but took the outside pitch too. I knew what I should lay off and what I should swing at.

“I was really trying to hit it out with that first time but, I mean, it worked the second swing. I was going up there swinging and seeing what would happen.”

Knights coach Rick Torresani joked with Shearer she “could have done more,” which the sophomore played off with a faux-dejected look. What the veteran Knights coach added later was the value that Shearer’s solo shot gave to the team, especially in the high-energy way the sophomore rounded the bases.

“She hit that way over the fence and she’s coming around the bases yelling and screaming and that electrified everybody,” Torresani said. “She can take over a game in a lot of ways and that’s one of them.”

Shearer let out a focused yell toward her team’s dugout as she closed in on third base, gave Torresani an emphatic hand slap then waved her arms as she approached a mob of teammates at home to cap the scoring play. Whatever she was feeling, it definitely caught on as North Penn erupted for five runs in the top of the seventh.

Of course, she got in on that too with a two-out, two-run double before scoring on Sabocsik’s RBI triple.

“That last hit, it just sealed up a great season,” Shearer said. “Ending on a high note with my batting, it just felt great to be able to do that.

“I learned how important it is to work as a team, or else we get nowhere and how to bounce back after every loss.”

Most programs would struggle to replace a pitcher of Mady Volpe’s caliber. North Penn feels it has a worthy successor in Shearer, a lefty who throws nasty stuff with high velocity. Like they have most of the season, Volpe and Shearer warmed up next to each other prior to Thursday’s game but this session, held in a Division I program’s bullpen, felt a little more like a passing of the torch.

“She’s a very good pitcher but with her attitude and the way the girls rally around her like they do for Mady, it should be very interesting next year,” Torresani said. “She’s a sophomore but she’s really not. She goes out and plays the game hard, she’s very knowledgeable, she’s fast, can bunt but also has a lot of power.”