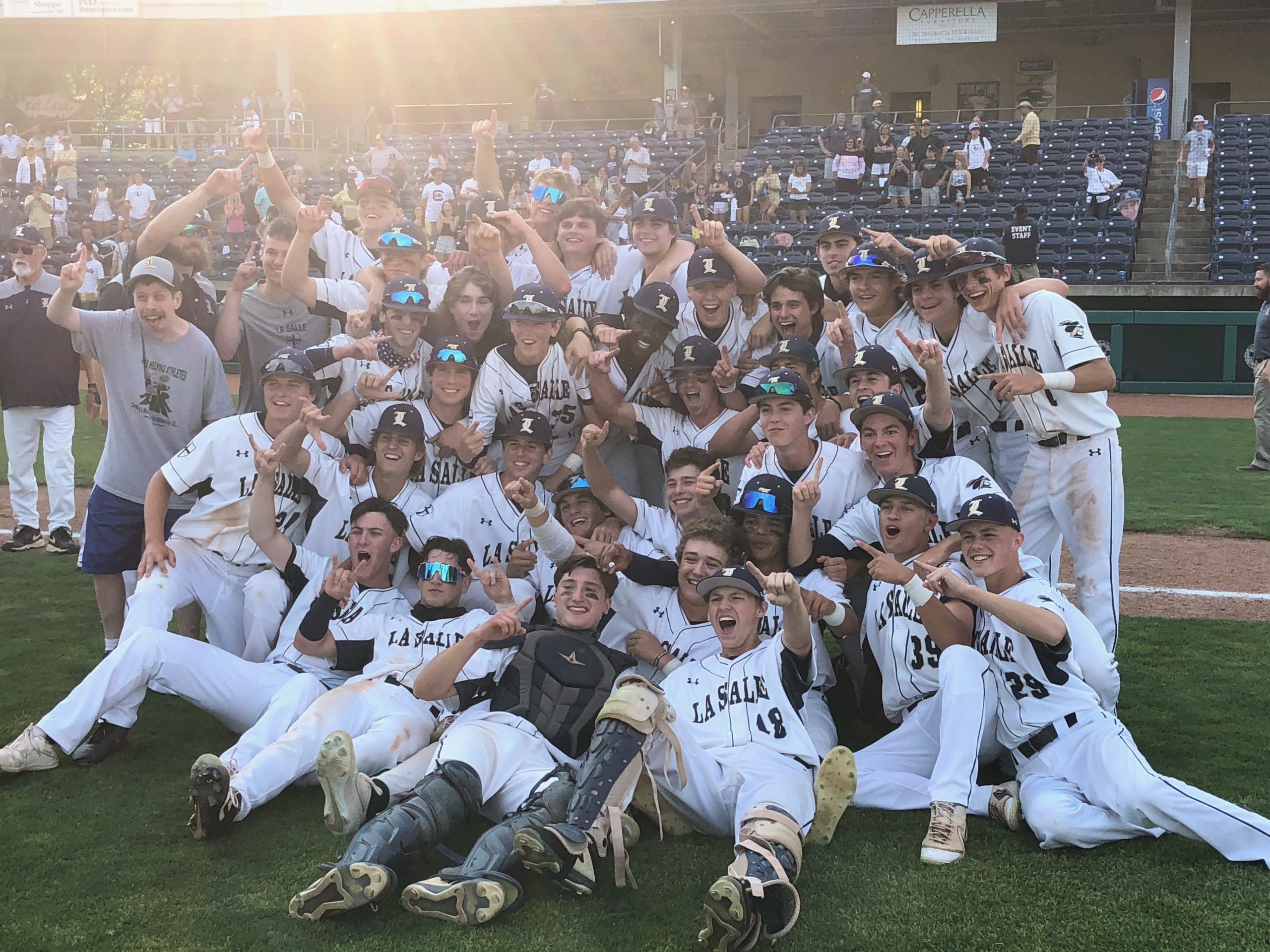 STATE COLLEGE >> It was a “two runs and Ryan Marler” kind of week for La Salle.

Marler was superb Friday, leading the Explorers to a 2-1 win over North Allegheny in a PIAA Class 6A title game that lived up to its billing at Penn State’s Medlar Field at Lubrano Park.

“It’s a once in a lifetime feeling,” Marler, who was mobbed under the team dogpile on the mound, said. “It’s also a little painful when there’s 1200 pounds of guys on you, but with that kind of success, I didn’t feel any of the pain.”

Senior outfielder Justin Machita, who caught the final out of the game, noted the similarities to Monday’s semifinal win over North Penn. In that game, Marler went the distance, was efficient and La Salle scratched out two runs to get the job done. The Explorers were also outhit 6-5 in that game and the same was true Friday with the Tigers out-pacing the PCL champions 5-3 in hits.

It wasn’t enough to faze an Explorers team that’s played in every type of game imaginable this spring and had plenty of close-game experience to fall back on.

“We really talked about slowing the game down, not counting outs and going one pitch at a time,” Machita said. “Ryan did a great job. When the nine hitter got that hit I said to myself ‘this is going to come down to Cole Young in a big spot,’ and it did but I trusted Ryan to throw strikes and he got (Young) out.”

Marler was so efficient on Monday, throwing just 74 pitches against North Penn, he had an idea he might get to throw again Friday. He wasn’t expecting the start however but when coach Kyle Werman gave him the news after the team’s last practice before heading to State College, the righty was ready.

The outing capped a remarkable postseason for Marler, who threw in all four of La Salle’s state games, getting three wins as a starter. He got the ball to open states against Hatboro-Horsham, pitched in relief against Emmaus then started and went the distance in both games this week to end the season.

If he was fatigued, he didn’t show it.

“I thought I’d get in for one, maybe two innings today but I definitely didn’t think this,” Marler said. “I think it was to my benefit that I kept my pitch count down in the last game. I was sore a few days after but today, I felt amazing coming out, my arm felt amazing. The mental side of the game, I had hours to prepare for this, on the bus ride, the hotel, just getting locked in to win.”

Marler’s best inning might have been the one where he allowed a run. North Allegheny’s stellar junior shortstop Cole Young led off the sixth with a walk and after stealing second and advancing another base, scored on Danny Gallon’s RBI single to cut the lead to 2-1.

Gallon wouldn’t advance another foot as Marler came back strong to retire the next three hitters in order to quiet the Tigers’ crowd and keep his team in front. The senior said it was a steady diet of changeups that got him through the frame and kept NA’s batters out of whack.

Werman said there was no doubt Marler was getting the start Friday and thought that sixth inning represented the reason why.

“You want a guy you know is going to be in the zone with two or three pitches, is going to compete, will manage your running game and he’s not going to do anything to shoot himself in the foot,” Werman said. “There’s also moments in a game and in a high school game you really see it, where that anxiety can kick in and it’s a time where you can give something up. It’s easy to beat yourself in those moments but he did a great job, got a few outs and you’re still in the lead.”

Senior right fielder Joe Cattie wasn’t worried. He’s seen Marler come through before and knew his teammate would do it again.

“I was hoping we’d go back to him, he’s such a stone-cold killer out there,” Cattie said. “He does an amazing job pounding the strike zone and he’s not afraid to put the ball down the middle where it needs to be and he hits his spots. We all trusted him to do that today.

“Nobody would have expected him to go two complete games, but he’s just a dog.”

La Salle got all the offense it needed in the second inning. Machita and senior center fielder Danny Wagner worked back-to-back walks to open the top of the frame, with Machita coming in on Brian Baquero’s following RBI single. Jephson Hadson-Taylor’s infield single was enough to get Wagner in and the senior would hold up as the eventual winning run.

Before every inning, the fielders meet outside their dugout for a quick chat and Wagner said that was key to keeping their nerves in check for the bottom of the seventh.

“Ryan pitching two complete games in the semifinals and championship, we were more than confident in him,” Wagner said. “I think we’re all just so happy to be out here. We expected this. North Allegheny is a great team but with our guys, I’m confident going out against any team in the state and we showed that today.”

La Salle won its third state championship, joining the 2012 and 2014 teams. North Allegheny had four teams play for state titles this year, with wins in girls basketball and boys volleyball and falling short in girls soccer and baseball.

Marler will be attending West Chester next year and is considering trying to walk on to the university’s baseball team. He built himself a pretty good resume this week.

“This has been four years in the making,” Marler said. “We’ve been grinding for this, practicing for this and I’m really excited the outcome was what it was today. We were ready to come in a go to war.”