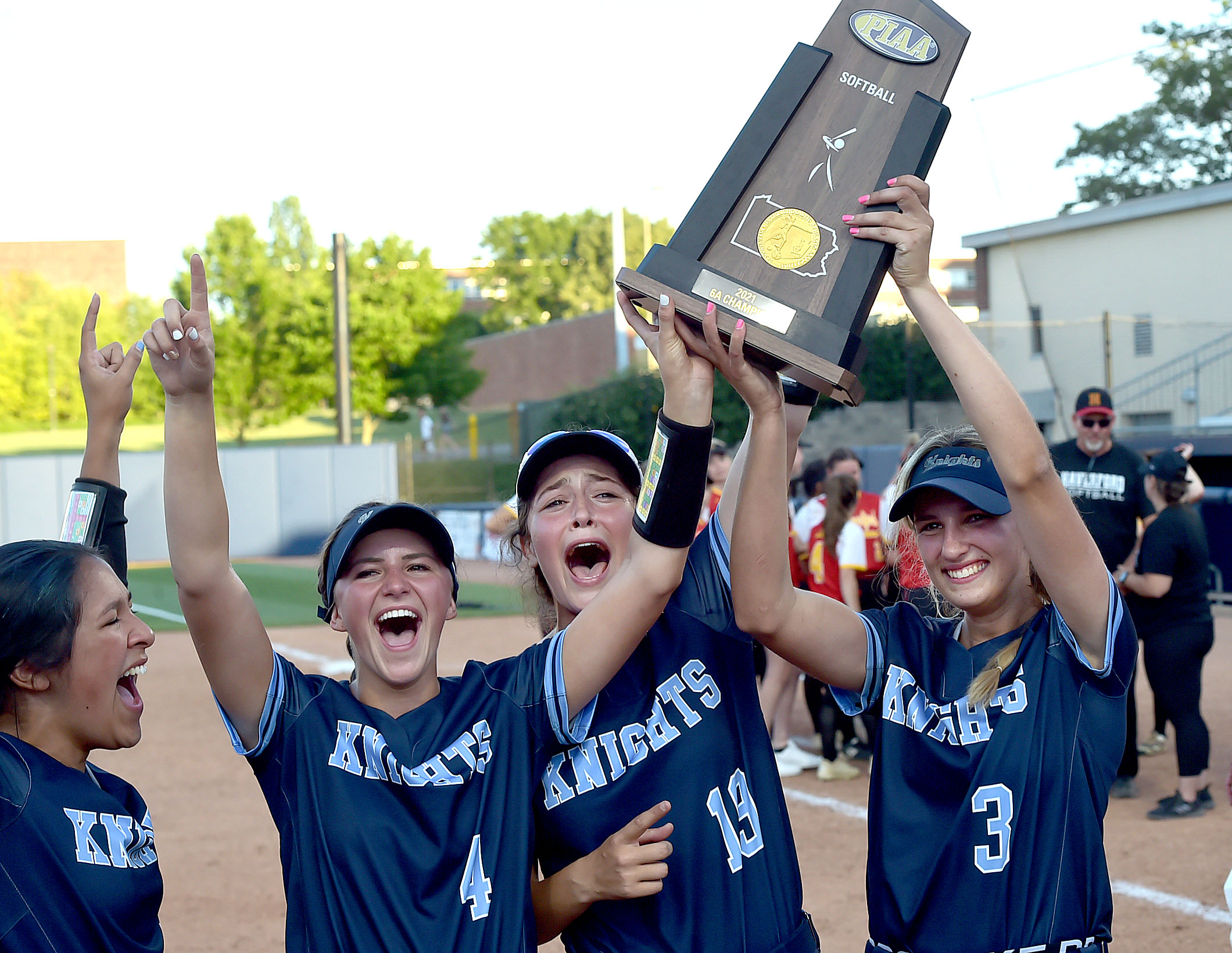 North Penn gets defensive against Haverford to win PIAA 6A title

STATE COLLEGE >> If anybody says they didn’t fall for Annabelle Smink’s pump-fake throw in the first inning, they’re likely lying.

The North Penn sophomore third baseman had pretty much everyone fooled when she turned to second and faked throwing the ball, only to quickly spin into a tag of Haverford’s lead runner for the first out of the first inning. After a dismal day defensively against the Fords in the District 1 6A playoffs, it was just the play the Knights needed to start their effort in the PIAA 6A title game.

North Penn’s defense dazzled, the bats mashed and Mady Volpe continued to not allow anyone to score as the Knights topped the Fords 11-0 at Beard Field on Penn State’s campus Thursday, winning their first state title since 1985.

“Errors lost us the game last time, so wanted to come out, be perfect and just kill it,” senior second baseman Rachel Lowry said.

North Penn players rush to congratulate pitcher Mady Volpe (3) after the last out as the Knights defeated Haverford High 11-0 in the PIAA 6A Championship Thursday, June 17, 2021 at Beard Field at Penn State University. (Pete Bannan/MediaNews Group)

A bevy of errors led to four unearned runs in North Penn’s 5-0 loss to the Fords on May 27, a setback that forced North Penn to play its way into states and kicked off a remarkable shutout streak that continued all the way to Thursday’s final out. The Knights did have one error in State College but it was more than washed out by the gems they kept pulling in the infield to stifle every gasp of air the Fords offense tried to pull in.

Smink’s fake the throw, make the tag play was the first and what coach Rick Torresani called the turning point of the game. After North Penn, which batted first as the away team, put a run across on Smink’s RBI single, the Fords immediately threatened. Brooke McKeown, who accounted for Haverford’s only two hits, went to third on a passed ball that gave Tess Smiley a walk.

The Knights threw to third as Smiley took off for second, trying to cause a diversion that would allow McKeown to race home. Or, so they thought.

“It was kind of in the moment, I knew she was an aggressive base runner, so if I had thrown it, she was going to go home,” Smink said. “I guess it was just those last-second instincts where I decided to fake it.”

Haverford lead-off hitter (9) Brooke McCallum is caught off third in the first inning by Annabelle Smink as the Fords went quiet after that falling 11-0 to North Penn in the PIAA 6A Championship at Beard Field at Penn State University on Thursday, June 17, 2021. (Pete Bannan/MediaNews Group)

Torresani said it is a play the team works on but he still gave his sophomore third baseman plenty of credit for knowing the situation well enough to make it. With two runners in motion, there wasn’t a lot of time but Smink got a lot of eyes turning the wrong way as she seamlessly went from fake throw to applying the tag to a bewildered runner.

“Maybe it’s a signature thing? Let’s say it was spur of the moment, I guess,” Smink said.

“The defense, we got a double play, how many double plays do you see in a championship game,” Torresani said. “The offense, we got hits throughout the lineup. It was just all there.”

SOFTBALL FINAL: North Penn 11, Haverford 0@NPsoftball finishes the mission, as Mady Volpe throws another postseason shutout and the offense breaks out to bring the Knights their first state title since 1985 pic.twitter.com/V0Erj1V88k

That wasn’t the only stellar play the team got from its gloves, either. After the leadoff batter reached in the bottom of the second, catcher Sarah Sabocsik and Lowry teamed up to get rid of her.

Sabocsik fired a laser from behind the plate to Lowry covering the first plate bag, with the senior getting the tag down to stymie the Fords’ momentum again.

“Every good play we had or big hit, it gave us another burst of energy that helped us keep going,” Lowry said. “We’ve practiced the pickoff so many times and tried it in a few games but it’s only worked a few times so to get it this time was very crucial with that being one of their first runners on base. We had to keep them from scoring.”

North Penn pitcher Mady Volpe was lights-out terrific as the Knights went on to a 11-0 victory in the PIAA 6A Championship Thursday, June 17, 2021 at Beard Field at Penn State University. (Pete Bannan/MediaNews Group)

Lowry initiated a 4-6-3 double play that led to a quick fourth inning, Smink made a leaping play to snare a flare off the line at third and Volpe was solid, fielding three comebackers in the circle before the final inning. There weren’t a whole lot of theatrics involved in the last three outs, just two routine grounders to the infield and a final pop-up that Sophia Collins hauled in to set off a charge of Knights to the pitching circle for a dogpile.

“We kept that energy up,” Smink said. “We played as a team today. I love all of them so much.”

Volpe hadn’t given up a run since Haverford’s Kerri McCallum took her deep to lead off the fifth inning in the district loss and kept her roll going Thursday. Her remarkable streak started with scoreless sixth and seventh frames against the Fords and finished with a grand total of 42 innings.

The senior Coastal Carolina recruit struck out seven, with her fifth that ended the third inning drawing a loud yell from the righty, and finished the mission she and her teammates had set out on months ago during preseason workouts.

“It’s unreal,” Volpe said. “It’s amazing and I’m so proud of everyone that stepped up and the fact we scored first. Our goal coming in was to score first, get hits and the good defense comes with that. The confidence in the field follows your at-bats.”

While North Penn was quieting the Fords on defense, it was slowly building its way to an offensive breakout. Following the first inning run, the Knights tagged on two more in the second with bases-loaded walks from Shearer and Smink, then got another two in the fifth on a pair of Haverford errors.

Shearer gave her team a spark when she crushed a 1-1 pitch well out to right center for a solo home run in the sixth that gave the Knights a 6-0 lead.

The SOL Colonial champions followed that up with a five-run seventh that all but put the game away keyed by a two-run triple from Shearer, an RBI triple by Sabocsik, an RBI knock from senior Carley DiGiuseppe and a sac fly by Lowry.

“I don’t think we had any expectations for this game other that having fun, we definitely didn’t think we were going to win 11-0,” Shearer, who drove in four runs and scored four, said. “We split our two games with them, so we were trying to play our game, play clean and see what happened.”

SOFTBALL END 6: North Penn 6, Haverford 0
Volpe rings up her seventh, ending the inning with two left on base pic.twitter.com/95l7tROyj0

Prior to the start of Thursday’s game, which was delayed nearly two hours by a pair of extra-inning games, the Knights practiced at State College High School. Before wrapping up, they discussed their plans should everything work out in their favor later that afternoon.

As the ball settled in Collins’ glove for the final out, the reserves hopped the dugout fence and the eight fielders all rushed the circle where they piled on Volpe.

“I’m so happy, I’m lost for words right now,” Volpe said. “We talked about doing a dogpile but it was still everything I hoped for. We worked so hard for this, everyone bought into this program and I’m so proud.”