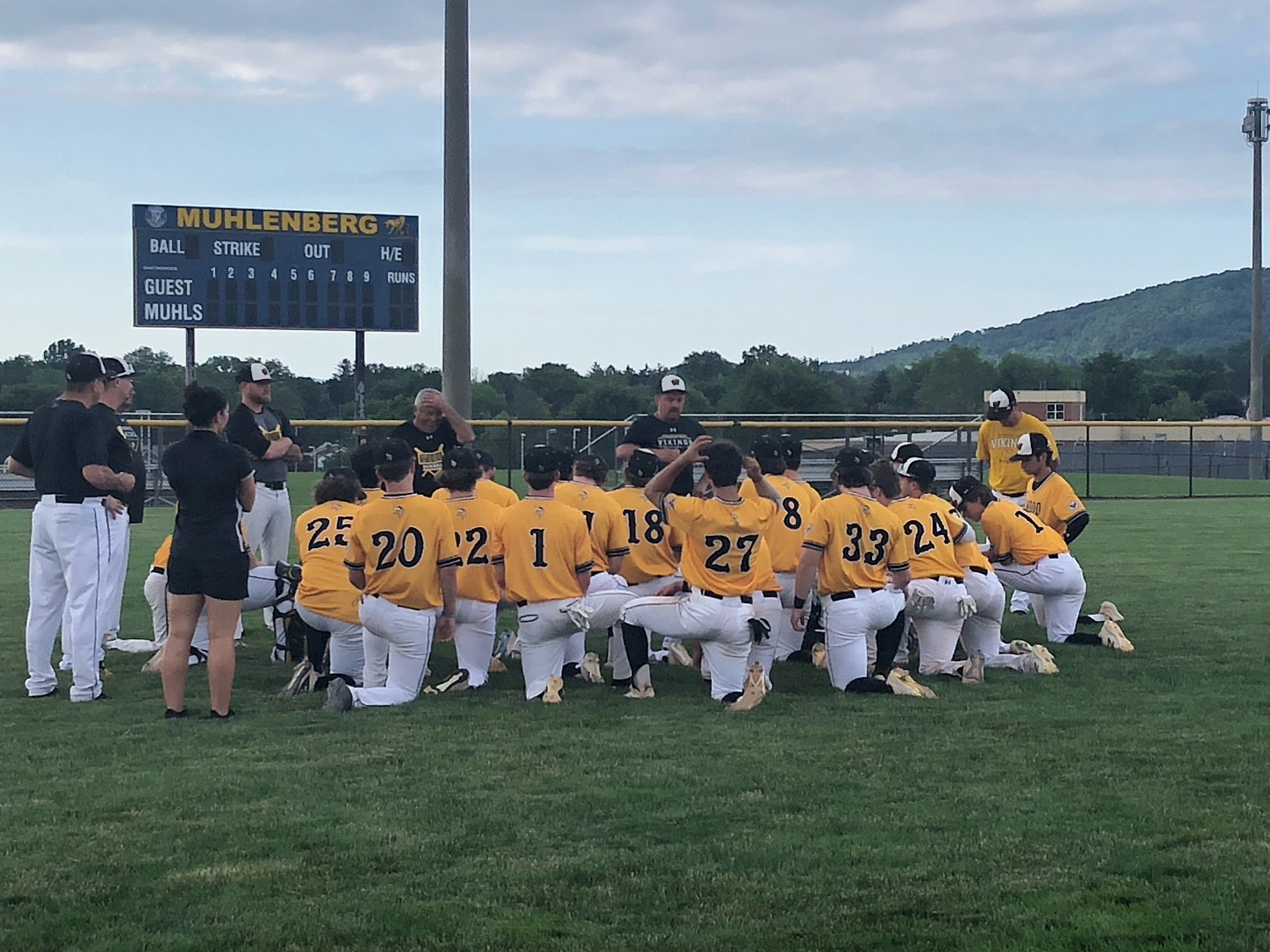 MUHLENBERG >> Ryan Albin started to walk off the field at Muhlenberg High School, then stopped and turned around.

Instead of being one of the first player back in the dugout, the Archbishop Wood senior co-captain was one of the last off the field. Albin met every teammate making their final walk of the season back to the bench with a handshake or hug and a few words of thanks or encouragement.

While the Vikings saw their season end in the PIAA 5A quarterfinals against Red Land on Thursday, it was their passion for the game that got them that far.

“We’re all very close, I think any single one of us would do anything for each other,” Albin said.

“The thing about this team, it’s one of the closest teams I’ve ever been a part of,” senior co-captain Alex Neeld added.

Wood went 19-5 in 2021, the second-highest win total in program history. While the Vikings fell short of winning the PCL title and reaching the state final, they came together in a way none of them expected to and turned in a season worthy of their efforts.

Albin, Neeld and Luke Cantwell were the team’s three senior co-captains and set the bar early for what the Vikings’ identity would be. Every game, regardless of time, place or opponent, would be met with the same passion and intensity and it helped mold a group of talented players into a team that covered for each other.

“We had everybody else’s back every single time,” Neeld said. “If somebody get an out, the next guy picked him up. If someone made an error, the next guy made the next play.”

Wood’s other seniors – John Gori, Cole DuHaime, Ryan Jensen and Kevin Cute – weren’t captains but filled their roles with the same energy as anyone else on the roster.

Vikings coach Jim DiGuiseppe Jr called this spring one of his favorite in his 25 years coaching. He lauded the seniors for the way they bounced back from losing the 2020 season to the pandemic and showed the juniors, sophomores and freshmen in the program the right way through fall and winter workouts.

“Every time we showed up to a game this year, our kids were here to play,” DiGuiseppe Jr said. “I’m real proud of that as the head coach of the program but also a graduate of the school. I love the determination our kids showed and I’m proud of what we accomplished this year. To get 19 wins this year speaks volumes about our kids and their commitment to getting better.”

Albin had a spectacular season as the team’s ace hurler, center fielder and leadoff bat and earned PCL MVP honors. He hit .388 on the year with 26 hits and 10 RBI and went 7-1 with a 1.16 ERA on the mound.

He was far from the only standout. Junior Michael Trommer was another two-way contributor, going 7-2 with a 1.34 ERA as the No. 2 pitcher and hitting .400 with 27 runs scored and 30 RBI.

“Keep playing the same way we have been,” Neeld said of his message to the returning players. “We found success in that and I think every single one of them knows what that means.  I think we set a good example this year. They know what they have to do to be successful.”

The state quarterfinal round has been a bit of a roadblock for the Vikings in recent years, but Neeld and Albin felt like Thursday’s setback would only serve as motivation. That was DiGuiseppe Jr’s message to his assembled team after the game as well. This spring, Wood got to the PCL title game and the second round of states and saw where they stood and what they needed to take the next step.

In past years, Wood has graduated larger senior classes but this group has more than etched its place in the program’s lore.

“It was their determination,” DiGuiseppe Jr said. “They were not going to let missing last year hold them back this year. They went out there and gave it everything they had all winter, all spring, the regular season and the postseason. The leadership the seniors displayed in our practices and games, they were great role models and it makes my job a heck of a lot easier.

“I told them out there, this is my 25th year and I’ve enjoyed all of our teams but without question this was one of our most enjoyable seasons and a lot of that had to do with our seniors.”

DiGuiseppe Jr also thanked his coaching staff for the energy and passion they brought to the team, especially in a year that presented plenty of unusual challenges.

While the seniors will leave holes to be filled, the Vikings feel confident in their returning players like Trommer, Joey Gale, Aiden Myers, Sean Slowinski and any of the other underclassmen due to be back next spring.

“We’ll have a good core group of guys next year and I think they’ll be able to take the team pretty far,” Albin said.