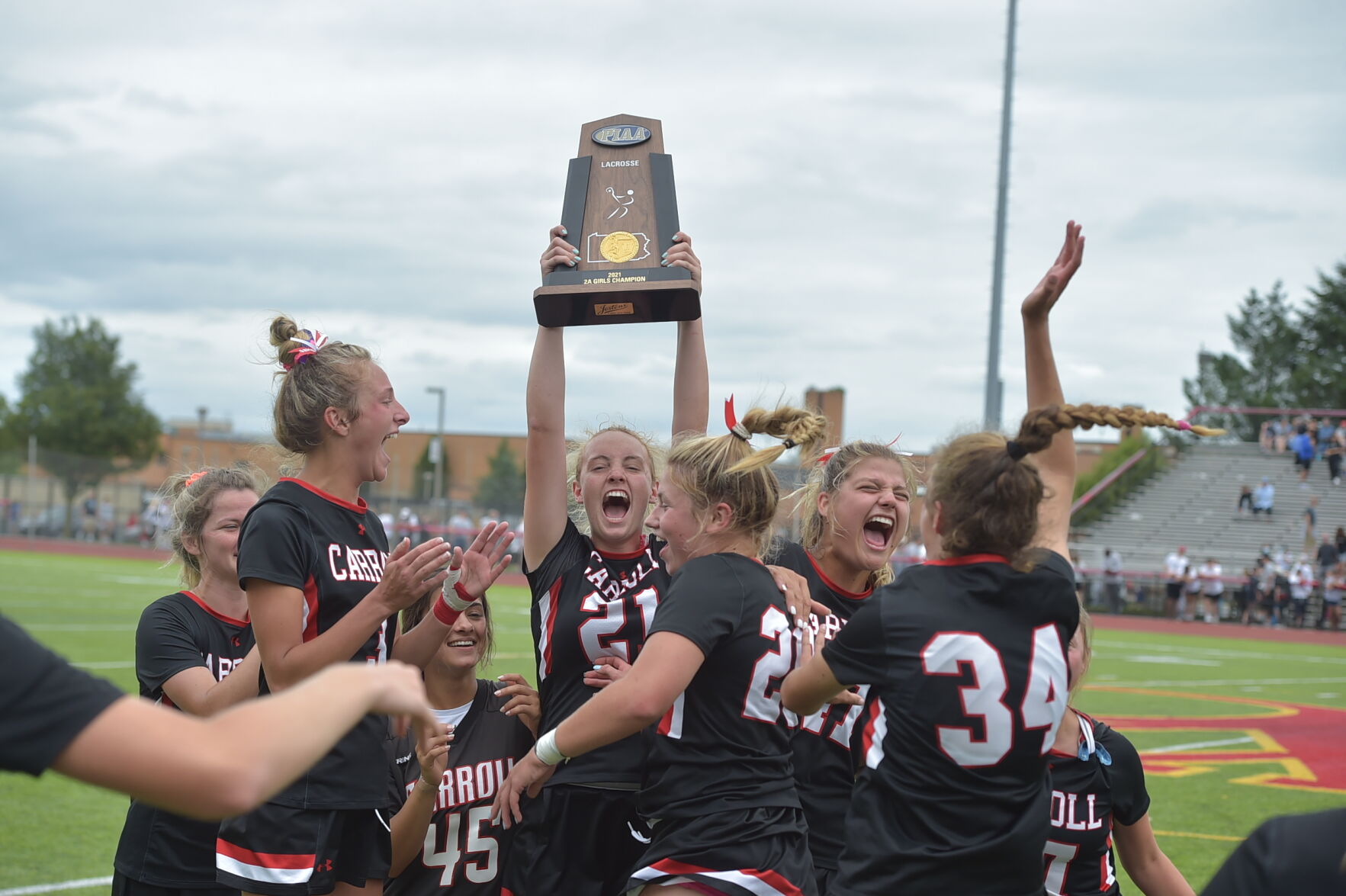 WEST GOSHEN — We knew the girls’ PIAA Class 2A state lacrosse championship between Strath Haven and Archbishop Carroll would be a grudge match. No one was going to back down.

What we didn’t expect was it to turn into Yellow Card Saturday.

Strath Haven could have used a QR code to keep track of the six yellow cards it accumulated en route to playing much of the second half down two players and finishing the game 9-on-12.

With teams losing one player for each card assessed starting at four, it wasn’t a matter of if Archbishop Carroll would celebrate its first state title since 2017, but by how much.

Strath Haven’s McKenzie Raech, right, falls to the turf as Archbishop Carroll’s Brooke Wilson drives the net with a little help from an opponent in the first half of the PIAA Class 2A girls lacrosse championship game Saturday at West Chester East High. (Pete Bannan/MediaNews Group)

The final score was 14-6. Six goals and six cards for a Panthers team that averaged 16 goals in the tournament entering the final? Just say the officials didn’t stick around to sign autographs for aspiring officials.

“I’m kind of frustrated,” Panthers coach Pigeon Graham said. “Here’s what I think about officiating: I think that the officiating shouldn’t determine the direction of the game. I think they’re there to keep people safe, and I totally appreciate that. I think it’s unfortunate that a call here or there changes our ability to even stay in the game.

“We didn’t have the chance to actually play a full game against Carroll. Whether that was because of our style of play, or the officiating I don’t know what it was, but it was just unfortunate.”

It was beyond unfortunate for fans who came to watch a lacrosse championship between two talented teams, not the officiating camp that broke out at West Chester East. The yellow cards took the nice off a piping hot day made easier by the full service concession stand featuring the breakfast of champions: Gatorade, Chik-Fil-A, pizza and pretzels.

The counterpoint came from veteran Patriots coach Lorraine Beers, who used her own tracking system to say the Panthers got off easy; i.e. they should have been playing six-on-12.

“I’ll be very honest with you, and I can be harsh on officials,” Beers said. “But I would have called three more yellow cards. When you put a girl, displace a girl onto the turf, that’s a card. If I’m playing defense and I check you hard enough that you’re going onto the turf it’s a card. And my girls aren’t floppers. They were hitting us hard. And I think that contributed a little bit to our slow start in the first half.”

The Panthers led 4-2 at the intermission, pulling into the break with three yellow cards. They were ahead 4-3 early in the second half.

Sixty-seven seconds later Kaitlin Nieczpiel burst down the boulevard and answered the Patriots’ goal. Not only was the tally waved off because of a dangerous follow-through, Nieczpiel got the Panthers’ fourth yellow card. Instead of a 5-3 lead, the Panthers suddenly were playing 11-on-12.

“I guess they thought it was a dangerous shot,” Nieczpiel said. “But I shot it and there was no one in front of me. I was really upset because I know I didn’t hit anybody. But we still kept our heads up.”

Machaela Henry of Carroll made it 4-4 less than a minute later. Shortly thereafter senior Danielle McNeely got the fifth yellow card, and Keri Barnett put the Patriots ahead for good with a rebound. Barnett had a goal taken away in the first half for being in the crease.

“I didn’t feel it but maybe a little bit in the crease,” Barnett said. “Obviously, the yellow cards gave us a big advantage but we still had to play very composed. Just because they’re down doesn’t mean they can’t come back and win it. We had to stay composed, take care of the ball and do what we had to do.”

After the Panthers fell behind, Graham gathered them during a timeout to give them the old, here’s what you do when you’re short a couple of players with time running out in the biggest game of the season speech.

“It was just to kind of try to stop the momentum of Carroll,” Graham said. “Trying to get everybody back on track. Get back to getting draw controls. And coming up with a plan of managing the clock once we did have the ball on attack. That goal that got called back because it was a dangerous shot kind of changed everything for us. We do practice a lot of man-down situations in practice. That was what I said after the second man-down, that ‘we play man-down all the time. It’s not that we don’t practice this way. We just have to do it for 15 minutes.’”

That didn’t work because the Patriots are a talented team. They spread the field, find the open shooter, and deliver.

Unfortunately for them, there will be questions about whether they earned the title, and that’s not fair in the sense that they aren’t responsible for enforcing the rules.

“It’s a tough game to call anyway. But I think with the yellow cards you can’t just throw them out willy-nilly. You’ve got to be really sure.”

Beers, on the other hand, bristled at the inference this title was tainted. She was on-point, too.

That’s on the sport, too. Coaches, players and yes, officials, have to evaluate themselves for the good of the game.