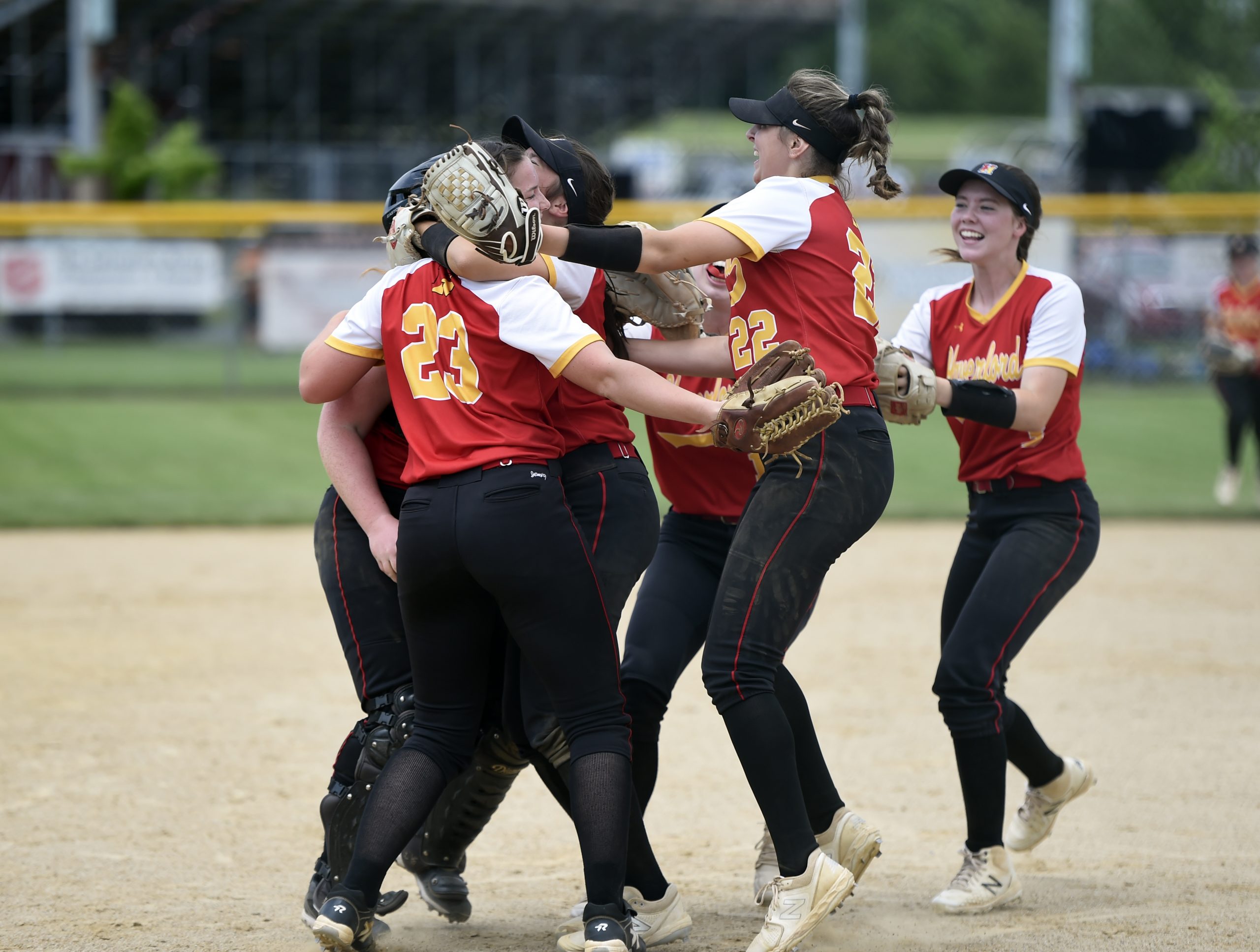 Haverford players celebrates after knocking off previously undefeated Spring-Ford, 5-3, in the quarterfinal round of the PIAA Class 6A tournament. (Owen McCue/MediaNews Group)

BOYERTOWN — Trailing by a run heading into the fifth inning, the odds of mounting a comeback against Spring-Ford were not in Haverford’s favor Thursday afternoon in the quarterfinal round of the PIAA Class 6A playoffs.

The District 1 champion Rams were undefeated for a reason. Spring-Ford had given up just 12 runs overall, two in the District 1 and PIAA tournaments, and allowed three runs in a game once this season.

The Fords, though, have been bucking the odds throughout the post-season and did so once again as they rallied for four runs in the top of the fifth inning to stun the Rams, 5-3, at Boyertown High School.

“We’re just always there for each other,” junior third baseman Kerri McCallum said. “There’s no backing down from anything. We’re always there to pick each other up. It’s a great environment to be around.”

It’s a winning culture that has the Fords (22-4) in the state semifinals for the first time where they will take on Pennsbury, a 6-2 winner over Quakertown, Monday at a site and time to be determined.

“This team loves each other,” Haverford coach Bob Newman said. “That’s the biggest thing about this team. I have 10 seniors and you think that sometimes with that, they might not get along because of the playing time, but they really love each other. They come and they work hard and they don’t give up.”

Fittingly, for those seniors, the victory came on graduation day, which was held later Thursday evening.

“It’s going to be a happy graduation day for them,” said McCallum, who went 1-for-2 with two RBIs. Haverford’s Tess Smiley throws to first for an out during Thursday’s PIAA Class 6A quarterfinal against Spring-Ford at Boyertown Area High School. (Owen McCue – MediaNews Group)

Haverford had a chance to strike early. The Fords had the bases loaded with two outs in the first inning but could not capitalize.

Spring-Ford (22-1) did not have the same problem. Maddie Walsh put the Fords in a 2-0 hole when she laced a two-run single with one out in the bottom of the Frame.

The Fords got one back on McCallum’s one-out RBI single in the third inning then turned to small ball to pull off the upset.

Claudia Stuck, Brooke McKeown and Jess Smiley started the fifth with three straight bunt singles. McCallum hit a slow roller to third and Stuck was able to beat the throw home to tie the game. Sophomore Shannon Gavigan followed with a single to center field that brought McKeown and Smiley home to put the Fords up, 4-2.

“I didn’t want to get behind in the count because I know that she’s a really good pitcher,” Gavigan said. “I wanted to attack early. I saw a pitch that I liked and went for it.”

Gavigan advanced to second on the throw home and moved to third on a perfect sacrifice bunt by Haley Greenwald. Pitcher Emma Taylor lofted a sacrifice fly ball to left to bring Gavigan home and give the Fords a 5-2 cushion.

“We just put the ball in play,” Newman said. “That was the game plan. We have so much respect for that team, that program and that pitcher. This group is unbelievable.”

“We’re a team that can get on base,” McCallum said. “Today it was with bunts and singles. We have a couple of big hitters, too, so I knew we could get on base. Once we get on base and get the momentum going, we’re going to score runs.” The Rams got one run back in the bottom of the fifth but it was not enough to offset Haverford’s outburst.

“Sometimes it’s tough to stop that snowball once it starts,” Spring-Ford coach Tim Hughes said. “By no fault of anyone, it just kept rolling, and then boom, boom, boom, and then we were getting in that situation where you had two people playing the same ball. It was one of those things and they all fell on top of each other in one inning. Other than that I thought we played well. They took advantage of us and all the power to them. They did well.”

While the offense slowly came to life Taylor settled down after giving up two runs and three hits in the first two innings. The Yale commit allowed just one run and four hits the rest of the way. She fanned six, walked three (all intentional) and set down eight of the last 10 hitters she faced, four on strikeouts.

She was at her best in the last two innings. The Rams got a leadoff single from pitcher Jules Scogna in the sixth and a two-out hit from Walsh in the seventh but could not capitalize either time.

“I feel like my spin got better and my speed got better, too,” Taylor said. “Then we just got more comfortable knowing what we needed to throw to each batter.”

Haverford’s confidence grew as the game wore on and the Fords were able to pull off the shocker of the tournament.

“We knew coming in that we were the underdogs and that the odds were against us,” Gavigan said. “We wanted to come in and surprise people.”