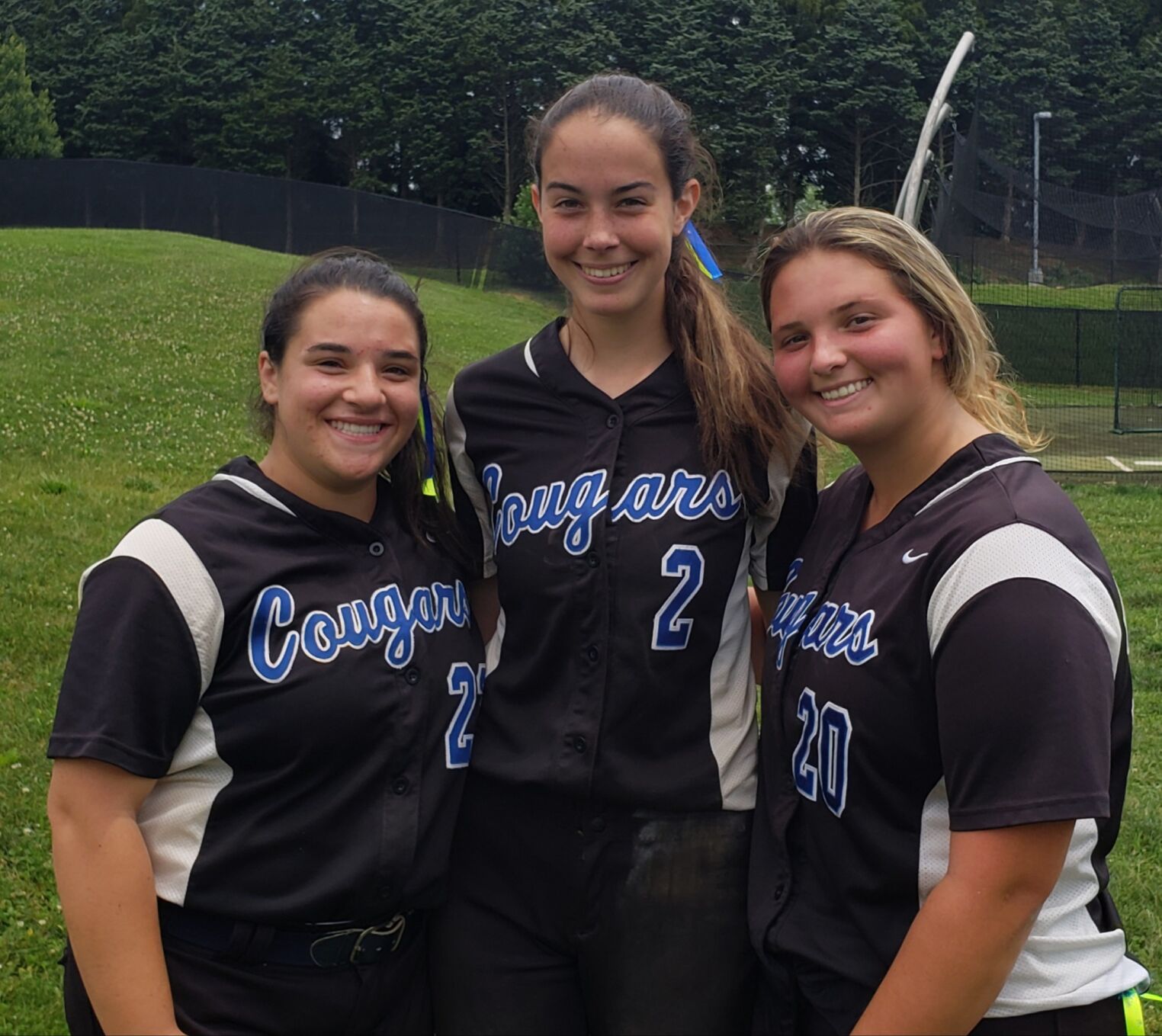 Springfield seniors from left, Jill Condi, Jordan Galloway and Sam Ciasullo get together one more time in their to celebrate a stellar season that ended in the quarterfinals of the PIAA Class 5A playoffs.

WEST GROVE – When the dust settled Thursday, three Springfield High seniors shared the sudden end to the softball season, and their careers.

Pitcher Sam Ciasullo, second baseman Jordan Galloway and centerfielder Jill Condi gave it their all in a 5-0 loss to Lampeter-Strasburg in the quarterfinal round of the PIAA Class 5A tournament at Avon Grove. Then they gave each other and their teammates a shoulder to lean on.

Lampeter-Strasburg broke a scoreless tie with a run in the fifth inning, then erupted for four in the sixth to put the game away. The Pioneers will play in their fifth straight state semifinal.

“Throughout the first four innings it was a battle back and forth between pitchers,” Galloway said. “We were getting on base. We just unfortunately couldn’t get those runs in. But I’ll put that inning behind us. It was one bad inning and I’ll stand by it but I had faith in my team. I like going out that way. We went super-far. It was such a fun season. Nothing like our past seasons. Especially last year when we didn’t get a season.”

When the Cougar seniors talk about their quarterfinal loss 10 years from now, they’ll remember right fielder Ava Craddock’s diving catch to rob the Pioneers of an extra base hit in the second inning.

That will be quickly followed by Condi’s fourth inning catch for the ages to rob Daisy Frank of extra bases – at the least. Condi made a running leaping grab at the fence to keep the game scoreless.

“That’s probably one of the best catches I’ve ever made in my entire softball career,” Condi said. “I tracked it down. I did not see the fence whatsoever. I caught the ball and I honestly thought I dropped it at first. I hit the fence and I heard the umpire calling ‘catch, catch.’”

After a delay to confirm Condi was OK, Ciasullo, who recorded 200-plus strikeouts this season, got the Cougars out of the inning with one of her nine punchouts.

In the fifth inning the Pioneers loaded the bases with no outs and got on the board on Julia Gerard’s fielders choice to Galloway.

The sixth inning was brutally long. Framed against 81-degree heat and humidity it showed the grit of Ciasullo, who wasn’t able to get out of a bases-loaded jam until four runs worth of damage.

The Pioneers got RBI-singles from Emily Platt and Ally Raub. Ciasullo walked a run in and hit a batter to bring in another run.

“I didn’t want to leave it over the plate in order to get a strike because they were going to hit it,” Ciasullo said. “The thing about playing seven innings is they’re going to catch on to you by their third at bat. They were good. I think they’re going to make the finals.”

The Pioneers play Monday against the West Chester East-West Scranton winner. Coach Gene Charles applauded the toughness of Ciasullo and the Cougars, who joined Marple Newtown as the second straight Central League team to fall to the Pioneers in states.

“Give her kudos, she moved the ball around,” Charles said. “We had one inning where the girls realized it was time. But the beginning of this game had some weird, crazy plays on both sides. Then their centerfielder and rightfielder robbed us of some extra base hits. It was just a strange beginning. It ended well because we won. We played well enough to win.”

Pitcher Keiva Middleton sent the Cougars went down in order in the final frame to finish off a three-hitter.

The game ended with Condi in the on-deck circle, praying for one last at bat.

“Definitely,” Condi said. “My last at bat, it was a pretty good one. I bunted, moved the runner and that’s all I could really do in that situation. I’ve had really great at bats this entire season. I can’t ask for anything else. I’m definitely going to remember all my teammates. Every single one of them since freshman year. Nobody ever had an issue with each other. We really all just bonded.”

Ciasullo will bring memories of her senior season to Holy Family University, where she will pitch next year.

“At the beginning of the year I would have never thought the season was going to be like this,” Ciasullo said. “It’s a good way to go out. It was a fun year.”