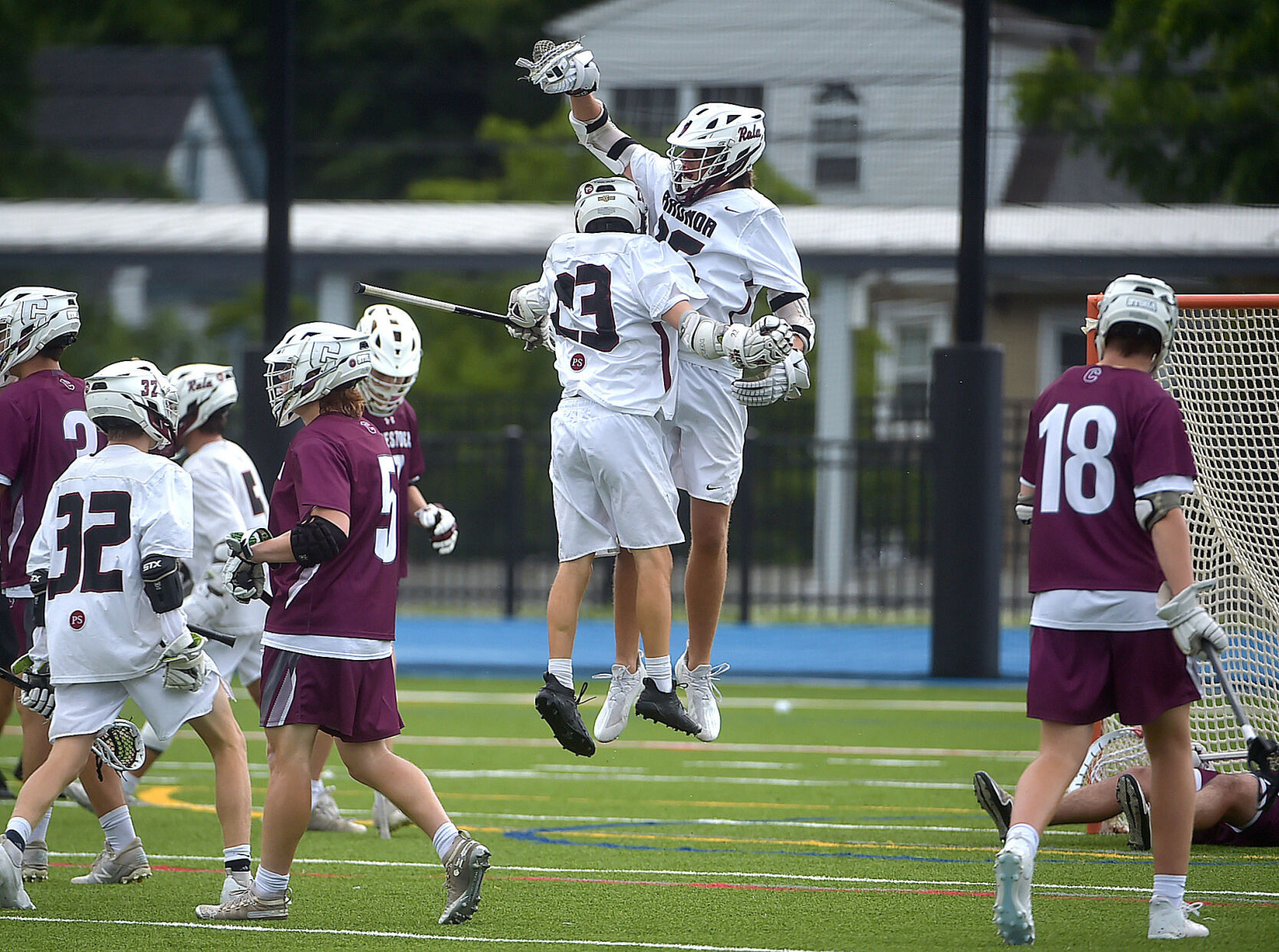 Radnor and Conestoga resumed its suspended PIAA Class 3A semifinal Wednesday at Springfield. All Radnor had to do to advance was play one decent half and let its defense protect a three-goal lead.

Instead, it was closer to perfect in the second half, the result a 13-4 pummeling of the rival Pioneers. The Radnor boys will join the girls team — which also defeated Conestoga in the Class 3A semifinals — Saturday at West Chester East High School, the boys taking on Kennett in a rematch of an 11-3 Radnor win in the district playback round. “Conestoga is a great team, but we’ve been waiting and we weren’t going to let rain or anything else get us unfocused,” Radnor goalie Robert Hobbs said. “When we were in the locker room, we easily could’ve been all bummed, like, ‘We had them, but now we have to come back here and play a new game with them.’ But, no, we were focused the whole time. We know they’re a great team, so we made sure we came out strong.”

Although Conestoga didn’t apply consistent pressure on net, Hobbs made several key stops in each half. He racked up nine saves and was aided by a strong defensive effort by seniors Carson Smith, Grant Pierce and Casey Ott, and junior Will Gallagher.

“Our coaches always preach, no matter what the score is, a 0-0 mentality,” Smith said. “Three goals (lead) is nothing. We were watching the Kennett-Garnet (Valley) game last night and we saw how quickly leads can disappear. We didn’t want to be that team that was up big and blew it. We’ve got a huge group of seniors that loves this team more than anything, so we all dialed in.”

Radnor held the Pioneers to one goal in the second half.

“I just wanted to bring energy today, just like yesterday, and be ready for anything,” Hobbs said. “I know I have a great defense in front of me and they helped me out a lot.”

As for the Radnor offense, Nick Lucchesi and Jack Murphy carried their hot starts into Wednesday. The fleet-footed Lucchesi scored his fourth and final tally less than four minutes into the second half to put Radnor ahead 8-4. Murphy found the back of the net twice Wednesday to give him a hat trick for the game.

“We put in a lot of hard work behind the scenes,” Lucchesi said. “A lot of the stuff you see out here is totally earned. Hanging out off the field, I think that’s a big part of it, too.”

Conestoga just couldn’t keep pace with Radnor’s explosive attack, which scored at least three goals in every period. The Pioneers also hurt themselves with turnovers and too many shots that went awry.

“Radnor took advantage of our mistakes. I thought we did really well on faceoffs (in the first half), but we just turned it over a lot,” Conestoga coach Brody Bush said. “We have a young team and that showed a little bit.” Radnor’s Nick Lucchesi uncorks a shot that will find all net in the first half Tuesday of a PIAA Class 3A semifinal game between Radnor and Conestoga. The game was postponed at halftime, with Radnor leading 7-4. (Pete Bannan/MediaNews Group)

The Pioneers got on the board when Michael Austin converted a pass from Patrick Reilly eight minutes into the quarter. Lucchesi tallied his second goal with 1:03 left, extending the Radnor lead to 4-1.

Conestoga was juiced up at the start of the second quarter, netting two quick goals in the span of eight seconds, but that momentum was short lived. Joey Allen and Reilly each scored for the Pioneers to trim their deficit to 4-3 a mere 55 seconds into the period.

But whenever Conestoga was flirting with the idea of remaining competitive, Radnor’s high-powered offense had an answer.

“It’s not so much them not coming out strong, it had more to do with us coming out firing,” Murphy said. “We were focused (Tuesday) and we knew we had to bring our best today.”

Murphy scored back-to-back goals to make it a 6-3 advantage. Graham Batchford got one back for the Pioneers late in the half, but Radnor finished strong when Ryan Goldstein tallied with seven seconds to go. Moments later the skies opened up and the game was postponed until Wednesday.

Goldstein finished with a goal and four assists. Drew Cox and Nate Lucchesi each netted a goal in the second half for Radnor.

Reilly paced the Pioneers with two goals and one assist. Sophomore goalie Patrick Jameison was overworked and at times overwhelmed, but he made some unbelievable saves along the way.