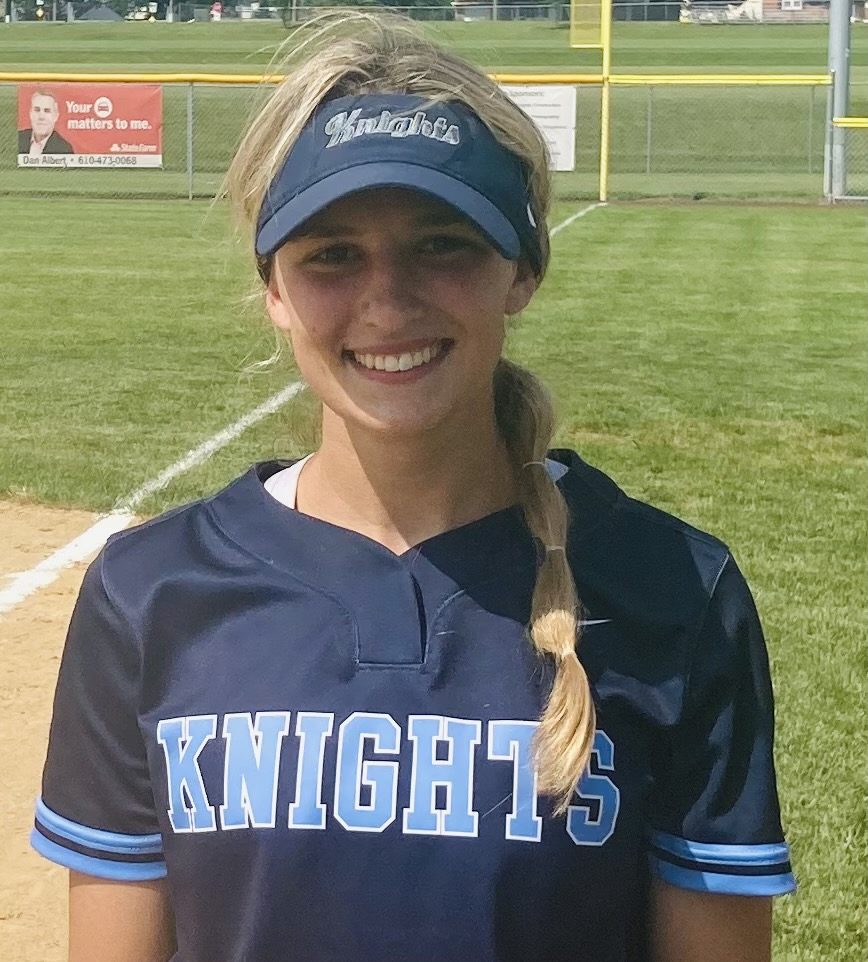 BOYERTOWN >> Mady Volpe piled up 13 strikeouts on the mound, contributed nicely at the plate, and North Penn’s all-around play added up to an impressive 4-0 victory over Penn Manor on Thursday in the PIAA-6A State Quarterfinals.

“It feels awesome,” Volpe said of the Knights advancing to the state semis. “I felt awesome. I just felt really loose. I had a pitching lesson (on Wednesday) that went really well. So that really helped me a lot. And my defense behind me was amazing and us getting those timely hits was really awesome.”

With the win, North Penn advances to face either Neshaminy or Canon-McMillan.

The Knights will be making their first trip to the state semis since 2013. The perennial power had reached the state quarters in 2018 and 2019.

“We were just talking about how we broke our streak,” Volpe said. “Every year, we would lose in the state quarterfinals. So it feels amazing.”

Volpe went the distance, allowing just three hits. She struck out the side in the seventh to end it.

“I was just using my change-up and my rise ball and I was using both sides of the plate,” she said.

Freshman Gianna Cimino belted a two-run double in the third to give the Knights a 2-0 lead.

North Penn widened the gap in the seventh, with Bri Wilmot’s RBI single to right that scored a run, with another run coming in on an error on the play to make it 4-0. “I keep telling the girls – good defense, good pitching and timely hitting, and that’s what we did today,” coach Rick Torresani said. “A freshman drove the first two runs in and a sophomore drove in the second two. You can’t ask for anything more from the underclassmen.

“Everyone stepped up and made the plays. It was just a great win.”

North Penn’s third began with a single by Rachel Lowry. Julia Shearer’s bunt single gave the Knights runners at first and second, and then a sacrifice bunt by Sarah Sabocsik moved the runners over.

With two outs, Cimino came through with her RBI double, and North Penn was in front.
Volpe was so much in command that she struck out eight out of the nine batters she faced in a stretch from the second to fourth innings.

“Every pitch was working,” said Torresani.

The Knights had another big inning in the seventh to bolster their lead.

Sabocsik, who caught for Volpe, cranked a double to the gap in right center and then Annabelle Smink (2-for-4) singled to center.

With one out, Wilmot knocked her single to right to easily score Sabocsik. An error on the play allowed Smink to race home and make it 4-0.

Volpe was 2-for-4 for the Knights and Carley DiGiuseppe went 3-for-4.

Emily Riggs, Kaelin Gable and Tori Hook had the hits for the Comets, with Aralyn Hoffert taking the loss on the mound.

Volpe struck out the side in the bottom half to send NP to the state’s final four.