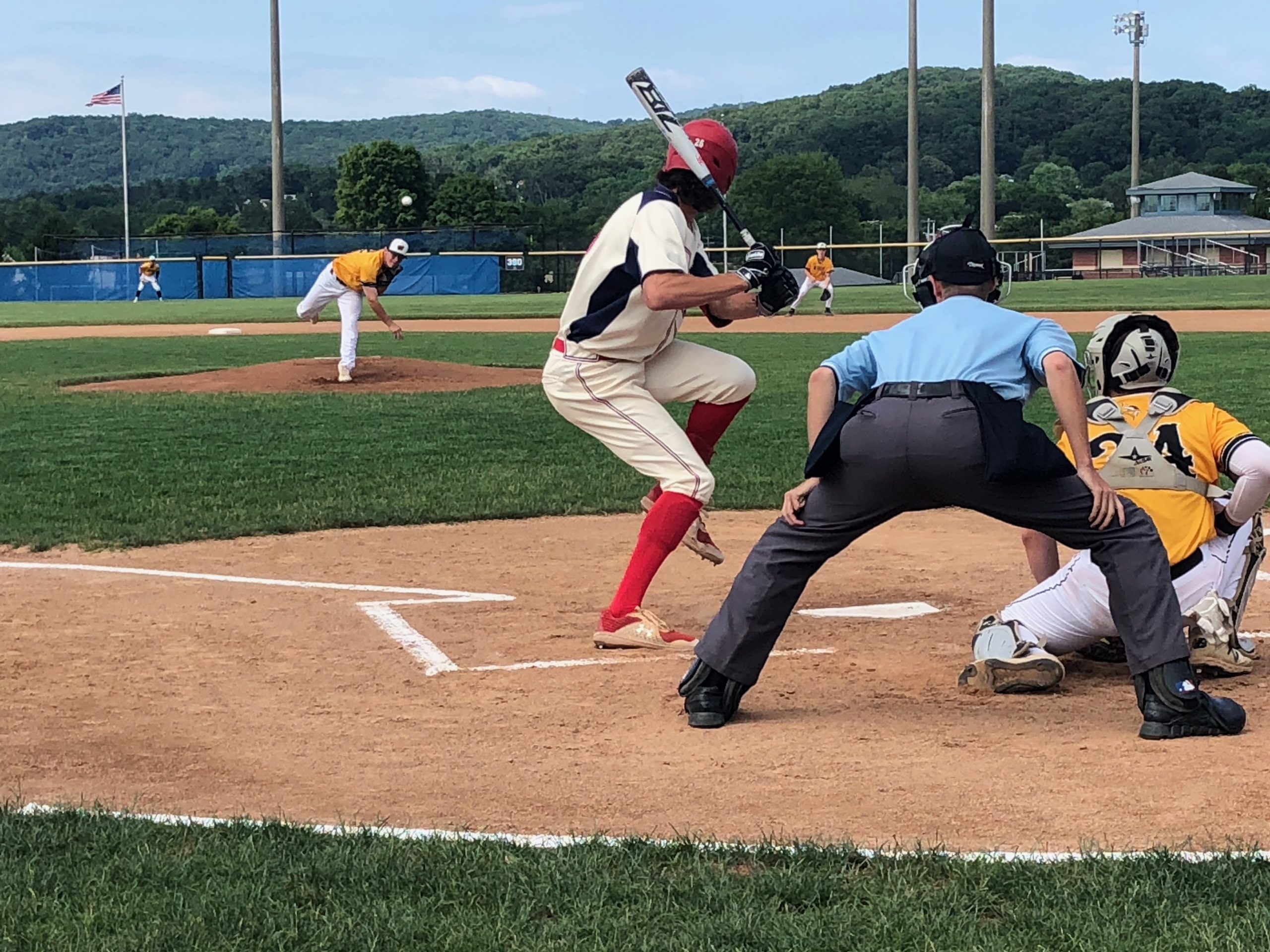 MUHLENBERG >> The ball rocketed off Alex Neeld’s bat, only to have its path coldly stopped after 90 feet by the glove of Red Land’s third baseman.

It was that kind of day Thursday for Archbishop Wood’s baseball team in the PIAA-5A quarterfinals against Red Land and pitcher Kadan Peifer. The hard-throwing righty, who got up to 89 on the radar guns of several scouts out to see the Patriots, didn’t really seem interested in letting the Vikings continue their season.

“I thought their pitcher really was in command all day and sometimes, you have to tip your cap to the other team,” Wood coach Jim DiGiuseppe Jr said. “Red Land played a good game, we kept competing throughout and I was proud of our guys but sometimes you tip your cap and we do that today to their pitcher.” The Patriots, state champions in 2019 and a favorite to claim their second straight PIAA title (the 2020 season wasn’t contested due to the COVID-19 pandemic), showed why they were a trendy pick to end up in State College. Red Land’s cadre of future Division I players, both the confirmed like Benny Montgomery (Virginia) and Cole Wagner (Georgia) and likely in Pefier, brought it on both sides of the plate.

Montgomery led off with a walk and despite Wood starter Michael Trommer coming back with an impressive strikeout of Wagner, the Patriots struck first. Ethan Phillips boomed an RBI double to deep left-center then scored two batters later when Brady Ebbert scored him on another RBI double.

That was all Peifer needed as he retired the Vikings in order through the first three innings.

“He changed speeds well, he hit his spots all day,” DiGiuseppe Jr said. “Our guys kept going out there and battled, which is all you can ask. We battled to the end and our guys did a real good job of that.”

Trommer, who has been an excellent pitcher all year, couldn’t get his location down consistently on Thursday and surrendered another run when Peifer ripped an RBI double in the third. Connor Woodson came on in relief and threw very well, but Red Land did put another on the board in the third and added its final run on Wagner’s RBI double in the sixth inning.

With the way Peifer was pitching, using several pitches all with a ton of movement, it was more than enough of a lead. Of course, even when Wood put the ball in play, the Vikings couldn’t catch a break.

“It sucked for us,” Neeld said. “Their pitcher went out and pitched well. He did his job and we came up short. We played our game, they played theirs and theirs was enough for them to be the winning side.

“He knew what he was doing. You could tell he knew how to pitch and how to pitch against us, that’s the sign of an overall good pitcher.”

Junior Aiden Myers was Wood’s most successful hitter on Thursday, drawing walks in the fourth and seventh innings as he was the only man to reach base against Peifer.

Wood’s season ends but the Vikings had plenty to celebrate. They returned to the state quarterfinals after also reaching the same round in 2019, played in the PCL title game and were District 12 champions.

Senior Ryan Albin was named the PCL’s MVP and he, along with senior co-captains Neeld and Luke Cantwell led Wood to a 19-5 record, the second-highest win total in program history.

“The biggest thing I’m proud of is how we came out in every single game with passion,” Albin, who will continued playing at Pitt Community College in North Carolina, said. “Last year, we had everything taken away from us and we felt like we had a really good team last year. To come out with so many new guys, we didn’t know what to expect but it taught us not to take it for granted.”