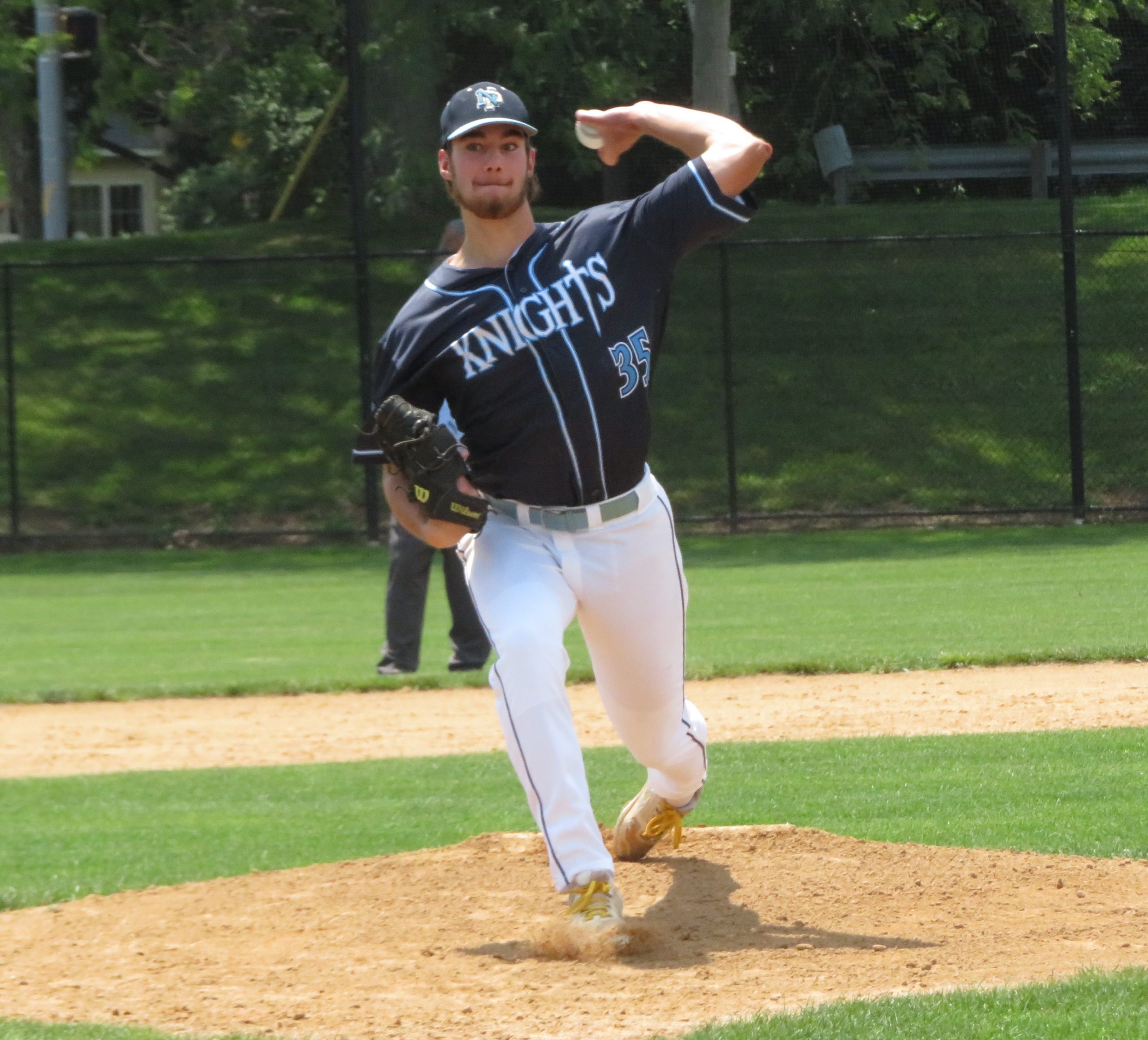 WORCESTER >> North Penn immediately grabbed the momentum in its PIAA-6A state quarterfinal matchup against Neshaminy and never looked back.

After Neshaminy’s leadoff man singled in the top of the first inning, the following batter bunted to advance the runner into scoring position. North Penn third baseman Justin Egner made an athletic play to catch the bunt and double the runner up at first base.

The Knights bench erupted and stayed loud the rest of the way. (1-3) North Penn scored nine runs in the first three innings and let starting pitcher Dylan Brown do the rest in a 9-0 win over (1-1) Neshaminy at Methacton High School Thursday.

“I just knew we had to get out of that inning,” Egner said. “Especially with the first runner on – that’s just a big play. Right after that I heard like no noise (from Neshaminy). It was just a killer.”

“That was massive for the momentum of the game,” Brown added. “They get the first at-bat, first hit, and they think they’re going to do well in the game. Once (Egner’s play) happens, momentum just shifts to our point of view then we come back and score more runs. They were just defeated after that.”

The win advances North Penn to the state semifinals, where it will face the winner of (11-1) Emmaus and (12-1) La Salle, Monday at a site and time to be determined.

Egner’s play on the bunt set the tone for the rest of the game. After the double play, Brown got the next batter out and North Penn quickly took the lead in the bottom of the frame.

Egner used his bat to make an impact this time. With the bases loaded and one out, he singled to score Jeff Sabater and make it a 1-0 game.

“Bases loaded, one out,” Egner, who was 2-for-2 with two RBI and two walks, said. “I just needed to get a run in. That’s what I did. I shortened up, put it through the middle and we were good.”

The Knights added two more runs in the bottom of the second. Ryan Sullivan and RJ Agriss reached on back-to-back one-out errors and Sabater bunted for a single to load the bases. Evin Sullivan worked a walk to score Ryan Sullivan and Steve Corrado grounded into a fielder’s choice to bring home Agriss and make it 3-0.

North Penn blew the game wide open in the bottom of the third. Sam Cohen was hit by a pitch, Ryan Sullivan singled and Agriss walked to load the bases with one out. Sabater hit into an error to score Cohen and Evin Sullivan was hit by a pitch to plate Ryan Sullivan. Corrado followed with the hit of the day – a two-run double to deep right centerfield. Egner and Colin Orndorff followed with back-to-back RBI singles to put the Knights ahead, 9-0.

“Guys put together some really tough at-bats,” Knights coach Kevin Manero said of the offense as a whole. “Made them work a little bit, didn’t go out of the zone, came up with some big hits when we had to. I was just really impressed with our whole approach at the plate today.”

That was more than enough with Brown on the mound. Across seven innings, the left-hander allowed seven hits while striking out six batters to two walks.

“Dylan was great today,” Manero said. “When Dylan’s throwing like that, you get a few runs and you feel pretty good about things.”

Neshaminy had runners in scoring position in the second, third, fifth and sixth innings, but never got the hit they needed. The Skins had one runner reach third base in the fifth inning, but Brown tallied a strikeout to end the scoring threat.

Liam DelGuerico took the loss for Neshaminy. He threw two innings and allowed three runs on three hits. He struck out one batter to three walks. Matt Mays pitched the rest of the way, striking out two batters to two walks over four innings. He allowed six runs on seven hits.