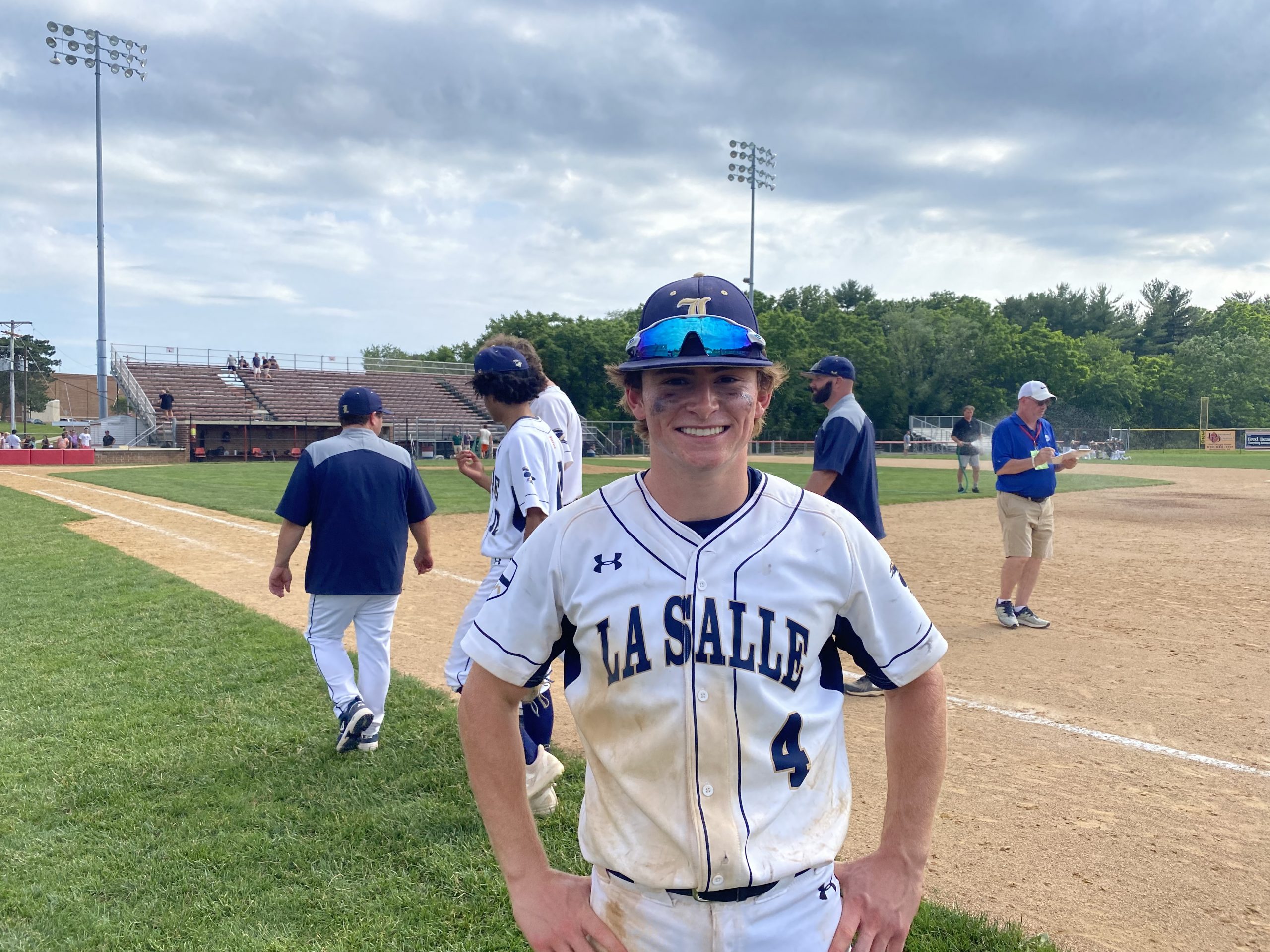 BOYERTOWN >> Eric Shandler pinpointed exactly when he realized how epic an inning the La Salle baseball team put together in the top of the fifth.

“I’d say when our catcher (Nick Astolfi) got up for the third time,” the Explorers senior shortstop said.

Astolfi, La Salle’s 19th batter in the frame, collected his second hit of the fifth with a single up the middle that brought home a pair of runs – the Explorers’ 14th and 15th of a mammoth half-inning that completely flipped Thursday afternoon’s PIAA Class 6A quarterfinal.

After District 11 champ Emmaus took a 7-2 lead with four runs in the bottom of the fourth, La Salle responded in astounding fashion – sending 20 batters to the plate, recording nine hits and erupting for 15 runs to surge ahead 17-7.

The Explorers finished things an inning later, adding four more runs and advancing to the semis with a 21-8 six-inning win over the Hornets at Bear Stadium.

“It’s crazy,” La Salle senior first baseman Mason Sermarini said. “We obviously went down big. Going into the fifth inning, I was talking to our starting pitcher Bogo (Connor Bogansky) and I said this is a game we’re going to remember for a while. We’re going to do big things. That’s what we did.

“We just trusted in what we’ve been doing all season. We knew we were going to put up more than seven runs and we did what we had to do.”

Sermarini was one of five Explorers with multiple hits, going 4-for-5 with two RBIs and three runs scored as La Salle – the Philadelphia Catholic League and District 12 champ – registered 19 total hits in reaching the state semifinals for the first time since 2018.

La Salle faces North Penn – which defeated Neshaminy 9-0 at Methacton – Monday at a site and time to be announced. Winner takes on either Spring-Ford or North Allegheny in the state final Friday, June 18 at Penn State.

“We’ve been trusting ourselves all season,” Sermarini said. “A lot of guys talk about maybe we’re not the strongest team, whether it’s pitching-wise or offensively but we trust in ourselves, trust the momentum that we gain every day and just trust in connections we made with each other and good things happen.”

Astolfi was 3-for-3 with two RBIs while Shandler went 3-for-5 with a double, four RBIs and three runs scored for La Salle, who is the first team to post at least 20 runs in a PIAA game since Neshannock defeated Coudersport 22-12 in the 2009 Class A first round.

“Everyone wants to be that guy but it’s important for us to put our pride aside, just try to get that little single and next guy do the same thing,” Sermarini said. “And that’s how we continue to move and be a really good, really solid, nice team.”

Cole Kochanowicz pitched the final 2 1/3 innings for La Salle to earn the win. He gave up two runs – one earned – on two hits, walked two and struck out one. Gallagher took the loss for Emmaus, allowing eight runs – all earned – on five hits and three walks in two-thirds of an inning.”

Joe Cattie led off the top of the fourth with a home run to left to pull La Salle to within 3-2 but Emmaus answered by plating four runs with two outs in the bottom of the inning.

Gallagher gave the Hornets a 5-3 lead with a two-RBI double to center. Andrew O’Brien followed with an RBI single, stole second then scored after an error on Tyler LePage grounder to put Emmaus up five.

Astolfi began the top of the fifth with a walk while a Jephson Hadson-Taylor single and Whitlinger getting hit by a pitch loaded the bases with no outs. Back-to-back RBI singles from Shandler and Sermarini had La Salle down 7-4 and ended the day for Hornets starting pitcher Braden Waller.

“Honestly when we got down five, there was no panic at all,” Shandler said. “We’ve been through adversity like that before in our league championship, we’ve been down but there’s just no panic with this team and we just fight ‘til the end. That’s all you can really do and stay calm and put good bats together and then it takes care of itself.”

With the bases still packed, Cattie walked to cut the deficit to 7-5. Justin Machita hit an RBI single through the left side with an error allowing Sermarini to come home and tie the game. Dan Wagner put La Salle ahead with an RBI sacrifice fly to right center with Machita scoring after an errant throw to third to make it 9-7.

“We have a really mature group and a really solid core of seniors that don’t ride the emotional roller coaster,” Werman said. “It’s something we work on, it’s something we talk a lot about and I think you have to compartmentalize. You have to look at what’s done and it’s done, manage and now what can we do now and that’s stringing together good at-bats and let one guy pick up another and see what the game gives you.”

After Cattie walked to load the bases, Machita was hit by a pitch and both Wagner and Baquero walked to push the margin to 15-7. Astolfi proceeded to reach base for the third time in the inning and gave La Salle a 17-7 lead with a two-run single.

Emmaus staved off the 10-run mercy rule in the bottom of the fifth on Schantz’s bases-loaded RBI sac fly.

La Salle, however, scored four in the top of the sixth. Whitlinger led off with a single, stole second and third and came home as Shandler reached on an error. A Sermarini RBI single made it 19-8. After a Tim Barrett double, the Explorers added the last two runs on RBI groundouts by David Kimmel and Mackunis.

Shandler gave La Salle a 1-0 lead in the top of the third with two-out RBI double to left center. In the bottom of the inning Emmaus went up 3-1 on three consecutive two-out RBI singles from O’Brien, LePage and Waller.