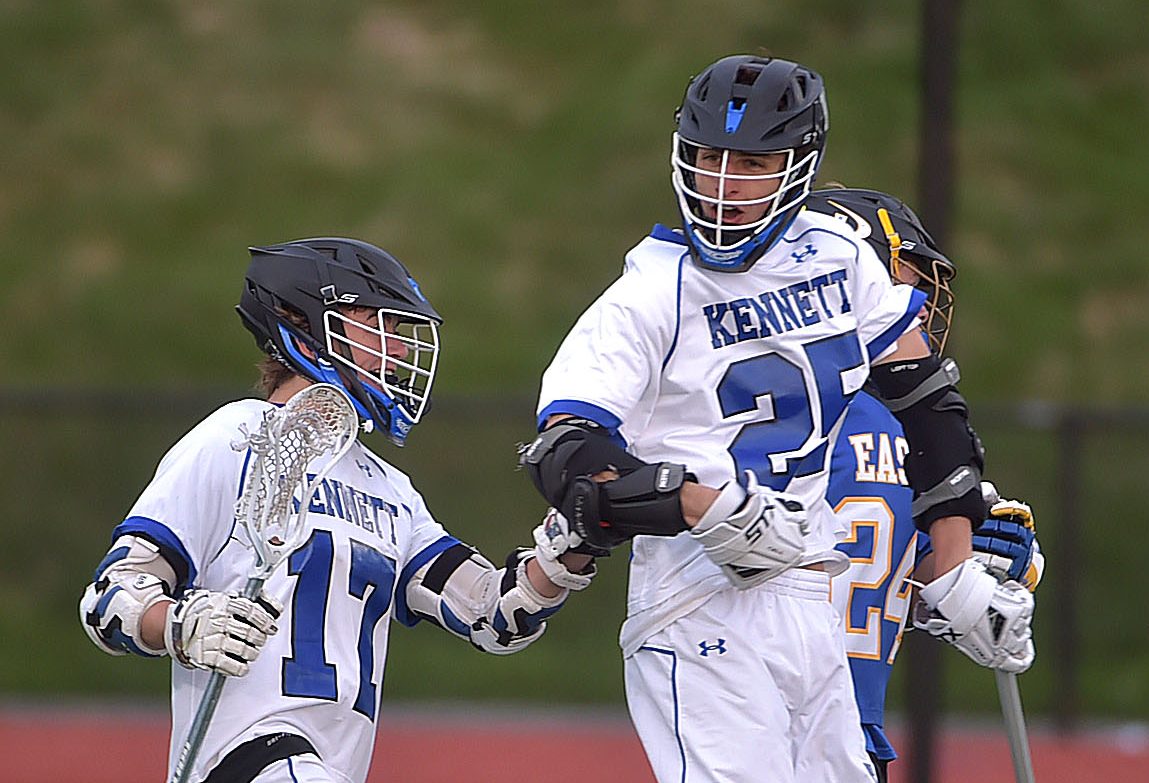 LONDON GROVE >> It was a showdown that struggled to get underway, and later looked like it might never end. And when it finally did, in double overtime, it concluded in the most incredible – and controversial – way imaginable.

With a berth in the PIAA 3A Boys’ Lacrosse Championship Game at stake, Kennett standout Sam Forte scored on a bouncing 40-yard heave at the end of the second OT to topple Garnet Valley, 11-10, and propel the Blue Demons to a crazy, bizarre triumph in a state semifinal showdown at Avon Grove.

“For the season we’ve had, I just had a feeling something was going to go our way,” Kennett head coach Bob Allvord said. “But I had no idea it would be like that.”

Afterwards, Jaguars’ veteran head coach Frank Urso was fuming because he contended that the game-winner came after time had expired.

“You can quote me: I’ve never seen officiating so wimpy,” he said. “To walk off the field and not give (us) an explanation in the state semifinals? They literally ran away, and they made a bad call.

“The shot was taken, it was tipped and the clock was at zero before it went in. I ran all the way over to the other end of the field calling for an explanation, but they just ran away because they didn’t want to deal with it.

“I’m sorry, but games shouldn’t end by the officials, and that’s what happened. I hate when the officials determine the outcome of big games.”

Nevertheless, it’s the Demons (22-2 overall) who will advance to the final, which will be held on Saturday at West Chester East (4:30 p.m.). The opponent, however, will not be determined until Central League rivals Radnor and Conestoga finish the other semifinal on Wednesday at Springfield (Delco). Radnor was in front, 7-4, at the half when the game was postponed due to bad weather on Tuesday.

“I wasn’t worried about (the time on the clock). I saw the ball go in and I started celebrating,” said Forte, a senior who is headed to play college lacrosse at St. Josephs.

“I’d say it was the biggest goal of my career – I’ve never been in the state championship game. But I wouldn’t say it was my goal because it hit off a couple guys.”

Just moments earlier, Garnet Valley’s Max Busenkell came within a whisker of ending it, but his shot clanged off the far post and bounded out of bounds near midfield. That’s when Forte grabbed it and flung it towards the Jags’ cage.

“I looked at the clock and saw two seconds, so I just threw it in there and I’m pretty sure it deflected off (teammate) Zach Hulme’s stick and Evan Hartmann’s shoe and went in,” Forte explained.

Urso said he thought it hit off of a Garnet Valley defender. But either way, it went in.

“(Urso) has a right to be upset,” Allvord said. “That is a tough way to lose any game, but especially this game.”

The Jaguars season ends with a 19-6 overall mark, and the Blue Demons take the season series 2-1. But Garnet Valley staged a determined comeback and scored six of the final eight goals in regulation just to send it to overtime.

“We fought back and we had chances to win it,” Urso said. “(Kennett’s) a great team, for sure.

“We had a mountain to climb, but we climbed it. This was an incredible game, but for it to end like that is horrible.”

Junior long-stick midfielder Sean Gallagher capped the late surge with a steal and a goal with 50 seconds on the clock in regulation. Busenkell had cut the margin to two about a minute earlier when Kennett failed to clear. And JP Demarco started the clutch 3-0 flurry with a goal with 7:07 to go.

“Garnet (Valley) is a very good team, so it’s no surprise that they would claw back into it,” Forte said.

“We just had a crazy play go our way at the end.”

Slated for a 3 p.m. start, the clash was delayed more than two hours due to lightning in the area. And when it did, the Demons were unbothered by the late start and scored seven of the first eight goals, including three in a 78-second frenzy, led by freshman Bo Freebery’s goal and assist.

“It was a crazy day from the start with the rain delays,” Forte said. “We knew we had to come out with some energy, and we did.”

Freebery scored again, and then Kennett’s big guns took over. Forte hit pay-dirt on a great individual effort followed by back-to-back goals by sophomore Zach Hulme – including a man-down laser – to make it 7-1.

The Jaguars, however, scored the last two of the half to cut the margin to 7-3. Joey Halloran notched the first and Bishop Barnes registered the second after a bad turnover deep in Kennett own territory.

Busenkell and Halloran took turns setting each other up to make it 9-5 heading into the fourth quarter. And with faceoff specialist Sam Di Trolio winning at the ‘X,’ Garnet Valley scored two more times early in the final period to get within striking distance.

“I don’t think anyone matches up better against us than (Garnet Valley),” Forte said. “We battled it out and it just happened to go our way this time. I think we willed it out in the end.”

“Sam is one of those players that wants the ball,” Allvord said. “He refuses to take no for an answer – he’ll make it happen. He is a special, special player.”

Thanks in large part to a 20-6 edge on face offs, Garnet Valley wound up outshooting the Blue Demons 28-16. But Astle was outstanding in goal for Kennett and turned aside 18 shots.

“Jason is the unsung super-hero of this team,” Allvord said of his senior keeper. “He isn’t just making saves, but remarkable saves. That just gets everybody going.”

It all adds up to another first for Allvord’s squad. The Demons entered the 2021 season without a single state playoff victory in program history. And now Kennett is playing for a state title.

“This is the most special group I’ve ever been a part of,” Forte said. “We talked together back in March and I remember saying, ‘we are going to win a state championship,’ so this goal has been in the back of our minds the whole time.”

Allvord added: “The drive of these boys, dating back to last winter, of setting the goal of get to this game, and the fact that they are now achieving that is just remarkable. It really is.”