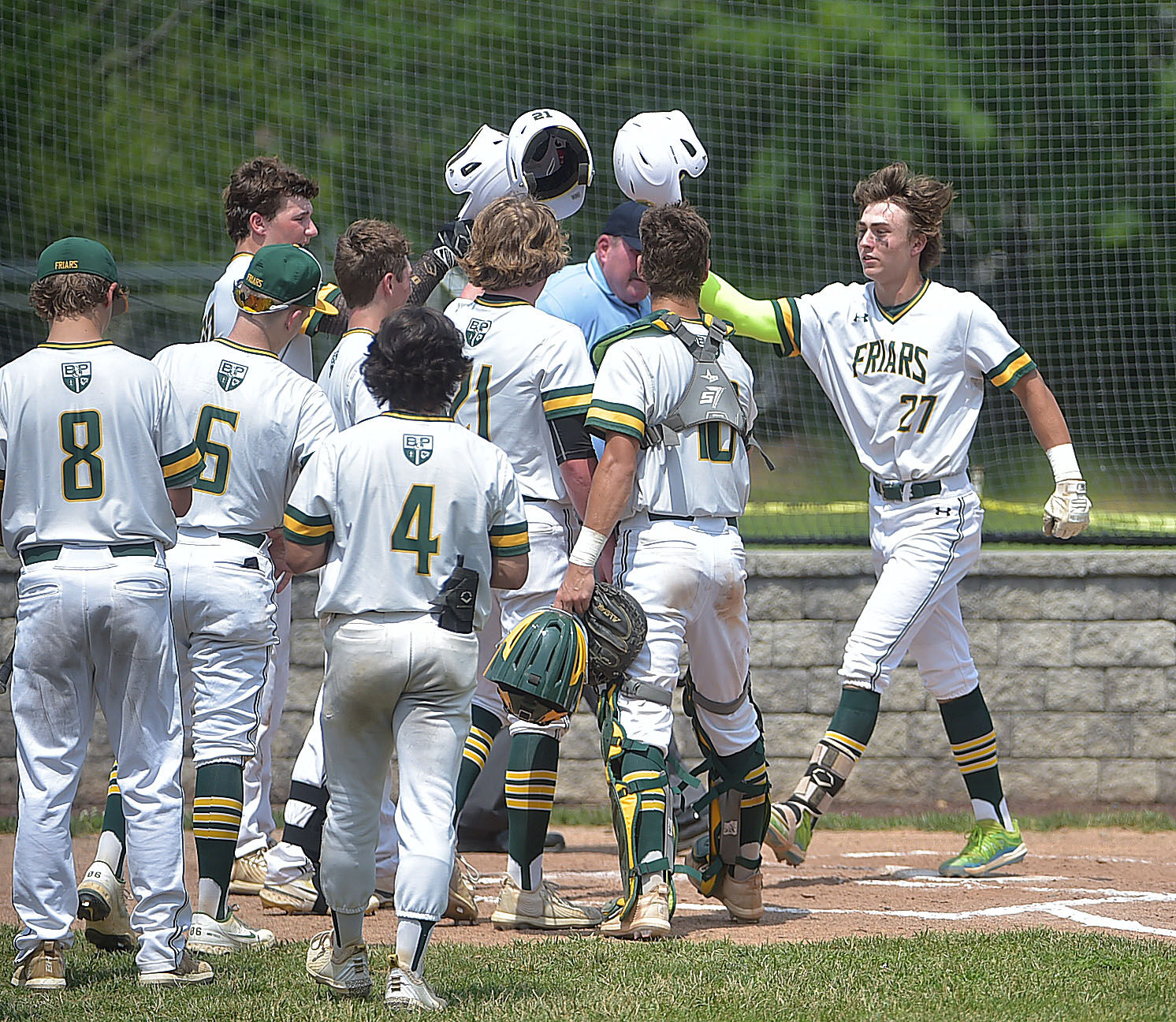 Bonner-Prendergast's (27) Kevin Henrich rang up a three-run home run in the first inning against Wyomissing in PIAA 4A state playoffs at Archbishop Wood in Warminster Monday afternoon. The Friars went on to a 7-1 victory. (Pete Bannan/MediaNews Group)

WARMINSTER — Kevin Henrich blasted a couple of tape-measure shots and pitcher Ryan Kearney struck out 10 to lead Bonner-Prendergast to a 7-1 decision over Wyomissing Area Monday in the first round of the PIAA Class 4A tournament.

It was the first state baseball playoff win for the Friars, who take on Holy Ghost Prep Thursday at a time and place to be determined. and who toiled on one of the hottest days of the year. Fortunately for them, throwing in the low 90s seems to agree with Kearney. In addition to double-digit punchouts, the lefthander scattered four hits and walked just one before his pitch count boiled over with two down in the seventh inning. Bonner-Prendergast’s Kevin Henrich hits a three-run home run in the first inning of a 7-1 win over Wyomissing in the first round of the PIAA class 4A playoffs Monday. (Pete Bannan/MediaNews Group)

It was 93 degrees when the game began. It was 97 (cell phone degrees) when Kearney threw his 102nd pitch for his 71st strike at Archbishop Wood’s field.

“Before the game, I was just wearing shorts and a T-shirt and kind of just sat in the shade and I was drenched,” Kearney said. “But I was ready to go from the jump. The heat helps me when I’m pitching. When I was out there, I wasn’t feeling anything.”

Henrich was also feeling it at the plate as he capped a five-run first inning with a three-run blast that took the steam out of Spartans starter Darren Brunner. Also in that frame was a two-run single by Austin Cannon to open the scoring. All runs came with two outs.

“There was kind of a sigh of relief after that,” Bonner-Prendie coach Steve DeBarberie said. “We had a comfortable lead, and we knew Ryan was going to come up and be efficient. He was an animal today. He was fantastic.”

After the big start, the Friars (15-7) got a little sluggish. Instead of staying on their feet and making chit-chat, Kearney noticed teammates taking a knee and trying to conserve their energy. It was almost as nasty in the shade as it was on the field.

“We came out with a good amount of energy, but you could tell a lot of the guys were hot,” Kearney said. “A lot of us were just sitting down. We’re usually not like that.”

After the Friars took a 6-0 lead in the third inning, Harry Weiss ripped a 1-2 pitch over the fence for the Spartans’ first run. But Henrich delivered his second home run in the sixth inning.

“The first one was a 3-2 count, and he threw a curve ball, kind of hung it over the plate and I did what I needed to do there,” said Henrich, who has four dingers on the season. “The second one, that was a fastball. I got more of that. We didn’t really play as good as we thought we were going to in the Catholic League. But I think we’re coming around in states and we’re definitely a team to look out for.”

The Friars didn’t play their best, committing three errors. But it was more than enough to prevail with Kearney on the mound. “He got his pitch count up but he battled all day,” DeBarberie said. “Even in counts he fell behind he worked back. He attacked all those hitters. All his pitches were working. He was just a bulldog today.”

Michael Anderson stepped in for Kearney to get the final out for the Friars. It was turning into an adventure, as he walked a batter and gave up a single. But it was fitting that Anderson blew a fastball past Weiss to complete the affair. It was the 11th strikeout for the Spartans (15-8).

“Their pitcher, I think he only walked one guy,” Spartans coach Dave Voigt said of Kearney. “He had strikeouts, we didn’t put a lot of balls in play, and you don’t win games by not putting guys on and moving the runners.”

The next time the Friars get to move en route to a state game, they might want to think about an air-conditioned bus.

“I think heat was a big factor,” DeBarberie said. “We got here pretty early. We took some swings. I mean, 95-degree day, it definitely showed. We came out strong early but we didn’t put the pedal to the metal. We needed to put our foot on the gas a little bit more. But overall, I’m happy. It’s our first state playoff win as a school.”