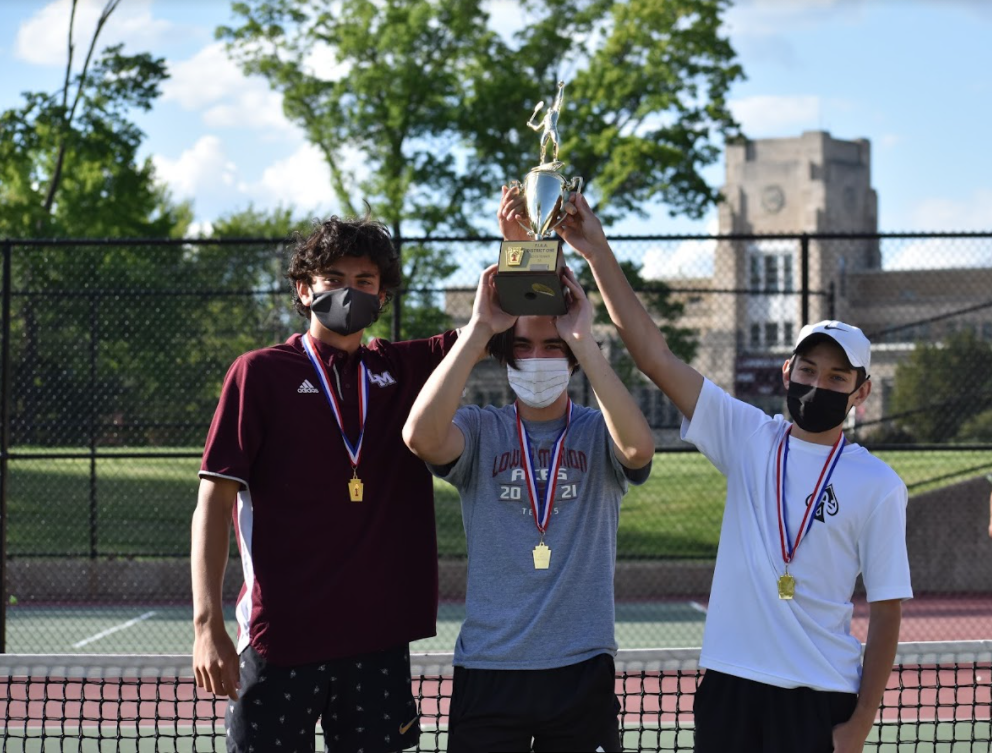 The Lower Merion High School boys’ tennis squad, which completed its 2021 season with a perfect 24-0 record and a PIAA 3A state team title, was a group of Aces in more ways than one.

“Even more than our undefeated record and winning states, the boys did a great job unifying with our JV team,” said Lower Merion head coach Harris Mailman. “During matches when we were all together on the sidelines, one wouldn’t know who was on varsity and who was on JV.  Many of our JV boys’ team and about a third of our girls’ team came out to support the varsity boys during their run to the state title.

“I’m so beyond grateful to have been part of what we accomplished. I will never forget this season and I know none of the boys will either. This team was elite in every way – a perfect 24-0 season while practicing hard, always positive, ultra-competitive, constantly inspiring and amazing sportsmanship. Every day coaching this team, with assistant coach Kathy Kesaris, was better than the next.”

Leading the way for the Aces was their first singles player, senior Vik Miller, who captured the PIAA Class 3A singles championship May 29. He will be attending University of Notre Dame in the fall.

“This year we were chasing perfection, and it was amazing to see everyone peak during our undefeated playoff run,” said Miller. “The memories and friendships I have made on this undefeated state championship team and over my four years, are some I will hold for a long time.”

Mailman said, “Almost every time I went to hit with friends at the Lower Merion courts this spring, I saw Vik practicing.  He’s a relentless competitor and very much like a second coach, always willing to help other players during practice.”

At second singles for the Aces was senior Justin Minerva, who finished third in the District 1 3A singles tournament. In the fall, Minerva will be playing for Haverford College.

“Justin’s old-school style of tennis is so much fun to watch as he always looks for a way to get to the net to finish off points,” said Mailman. “He’s added power to all of his shots, mostly his serve, which has really paid off for him.  Throughout the season, his match was often the first one to finish as Justin wastes no time winning quickly.”

At third singles for Lower Merion was junior Justin Yi, who later teamed with his younger brother Brian Yi to capture the PIAA 3A doubles state championship.

“All of our singles players are very close in talent, and Justin accepted his ladder spot and throughout the playoffs was either the first to win or he clinched the match for us,” said Mailman. “Other players fed off his high energy during matches and I’m looking forward to him playing first singles next year.”

Yi said, “The key to our team’s success was the amount of effort our team has put in during the off season. A lot of teams practice hard during the season, but players on our team regularly competed in USTA tournaments and trained before the season started giving us a major advantage.”

“At most schools, Brian would have at least played second singles, if not first singles,” said Mailman. “During warmups, I believe it was clear other teams knew they had no chance of taking first doubles when they saw Brian’s playing ability.  He stepped into singles whenever we had injuries and always played great.  I’m looking forward to him playing second singles next spring.”

Brian Yi said his favorite memory of the season was lifting the state team championship trophy.

“When I lifted the trophy, I was very grateful for all the times that my teammates and I worked to improve and get better throughout the season, when we could have stayed home and rested instead,” said Brian.

Teaming with Brian Yi during the regular season at first doubles was Lower Merion senior Ethan Blum, who also ran cross country in the fall for the Aces. In the fall, he is headed to the University of Pennsylvania.

“Not many players got more out of their tennis seasons than Ethan did,” said Mailman. “As a freshman, he was definitely more of a singles player, but developed into a great doubles player, always hitting angles and getting to the net.  He mentored Brian [Yi] throughout the year and the two of them were arguably the best first doubles team in recent Lower Merion boys’ tennis history.”

Lower Merion’s second doubles team of sophomore Mark Lancaster and Stoyan Angelov also sparkled this spring. In the PIAA 3A state championship final (a 5-0 Lower Merion win against host Hershey), the duo were the first players to complete their match, a 6-1, 6-1 victory.

“We played one of our best matches of the season in the state final,” said Lancaster, who added, “I think the key to our team’s success was our strong team bond and high morale. Over the past three months, we spent almost every day together, working towards the ultimate goal of winning the state championship. Our signature ‘Let’s Go Aces!’ cheer and our personalized nicknames during the pre-match lineups are just some examples of the bond we formed as a team this season.”

“Mark’s sportsmanship and overall demeanor is fantastic,” said Mailman. He’s a natural doubles player and probably put away more volleys this year than anyone on the team.  He was always willing to try new formations finding different ways to win.”

Angelov, like the other Lower Merion players, was used effectively at various positions throughout the season. Next spring, he will be competing for the third singles spot.

“Rarely did any opponent break Stoy’s serve all season,” said Mailman. “His serve led to many free points and often Stoy would finish points on his return of serve very quickly.  His power and natural athletic ability is surreal.”