PIAA Class 3A Girls Lacrosse: Mooney quick on the draw in Radnor’s win 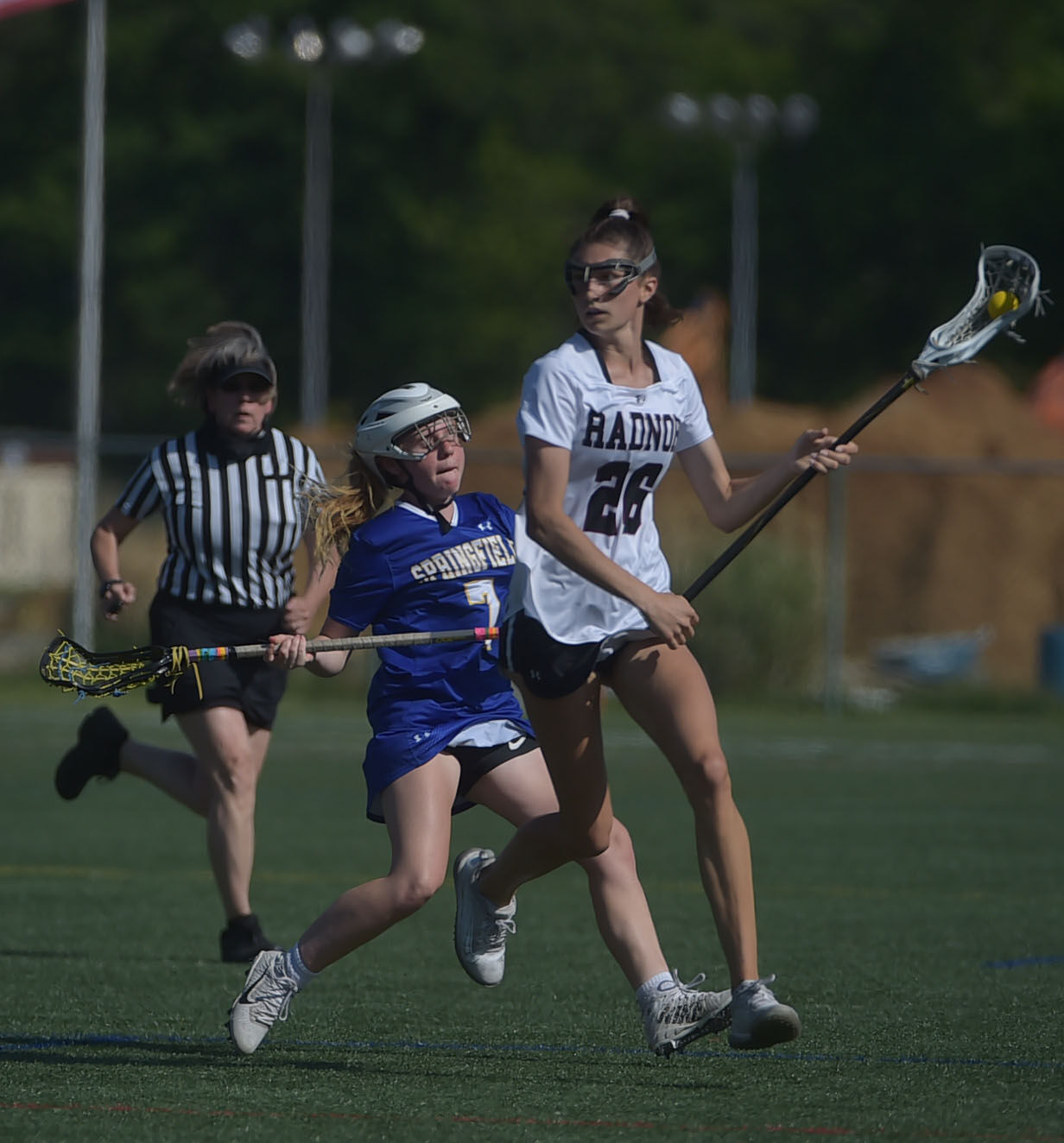 Radnor's Margaret Mooney, left, seen in a regular-season contest with Springfield, led Radnor to a win over win over Owen J. Roberts in the PIAA Class 3A quarterfinals Saturday. (Pete Bannan/MediaNews Group)

CALN — After they wrapped up a convincing 13-4 victory against Owen J. Roberts, Radnor High All-Americans Tori DiCarlo and Margaret Mooney shared a moment of genuine surprise.

Mooney, the 5-11 midfielder, was informed she had surpassed 100 draw controls for the season during the game.

DiCarlo gasped and shouted to her friend, “Hey! I didn’t know that!”

The personal milestone is cool and all, but Radnor has its sights set on bigger goals. With the second-round win Saturday at Coatesville, Radnor (20-2) advances to the PIAA Class 3A semifinals to play league rival Conestoga.

“We talked about that a lot right after practice (Friday) that we had to take care of ourselves before we came into this game,” DiCarlo said. “Because we knew the weather conditions do affect the game and we had to be ready.”

DiCarlo was on top of her game, pacing the Radnor attack with a game-high six goals and three assists. The 100-goal scorer and Naval Academy recruit was unstoppable.

“She definitely had the hot hand today,” coach Kristin Addis said. “These seniors played in this game as sophomores, so they have the experience. I wanted them to trust and rely on that experience and use it to their advantage and I think that’s what they did.”

Radnor and OJR were evenly matched for the first 20 minutes or so. Nobody seemed to want to break a 1-1 deadlock until defender Avery Ciatto caused a turnover, enabling Radnor to run in transition and set the stage for Sarah Kelley’s go-ahead goal. DiCarlo, Shiela Esgro and Cierra Hopson also found the back of the net as Radnor scored four unanswered to close the first half with a 5-1 lead.

“We wanted from the start to control the pace,” DiCarlo said. “Once we got the draws and set up the attack, we could slow it down. We knew that was the game plan and we didn’t want to let them set the pace because we know that’s our job to do. If they do set the pace, we come out even harder to regain it and maintain that stamina the whole way through.”

“We didn’t want them getting the momentum,” added Mooney, a William & Mary recruit. “We had to answer their goals with our own. We didn’t want to let up and knew we had to keep scoring and keep our pace.”

Esgro recorded a hat trick and an assist for Radnor. Kelley finished with a pair of tallies and Hopson added a goal and two helpers.

Ciatto, Katie Deshan and Ellie Rinehart swarmed on defense and limited OJR’s offensive opportunities. When Gabby Koury, Ava Clemson and the OJR attack were able to unleash clean shots, Radnor goalies Abby Jansen and Elise Palmer were there to thwart them away. Jansen (six saves) and Palmer (five) continue to be a wonderful one-two combo in net. The timeshare has yielded outstanding results through the first two rounds of states.

Owen J. Roberts (20-2) continued to make strides, proving it deserves mention among the top girls lacrosse programs in the state. The Wildcats aren’t quite at the level of a Central League powerhouse like Radnor, but they’re getting there. A young team loaded with talent, the Wildcats should present an even tougher challenge in the postseason come next spring.

“What I said to the girls is that we continue to establish a legacy of accomplishment and success,” coach David Schlesinger said. “We’ve reached this level before — the quarterfinals in districts and states — so this loss only hurts after a few days if we don’t learn from it. And that’s the message to the girls right now. We’ll miss our seniors that are graduating, but we have a very young team and we’ll be back.”