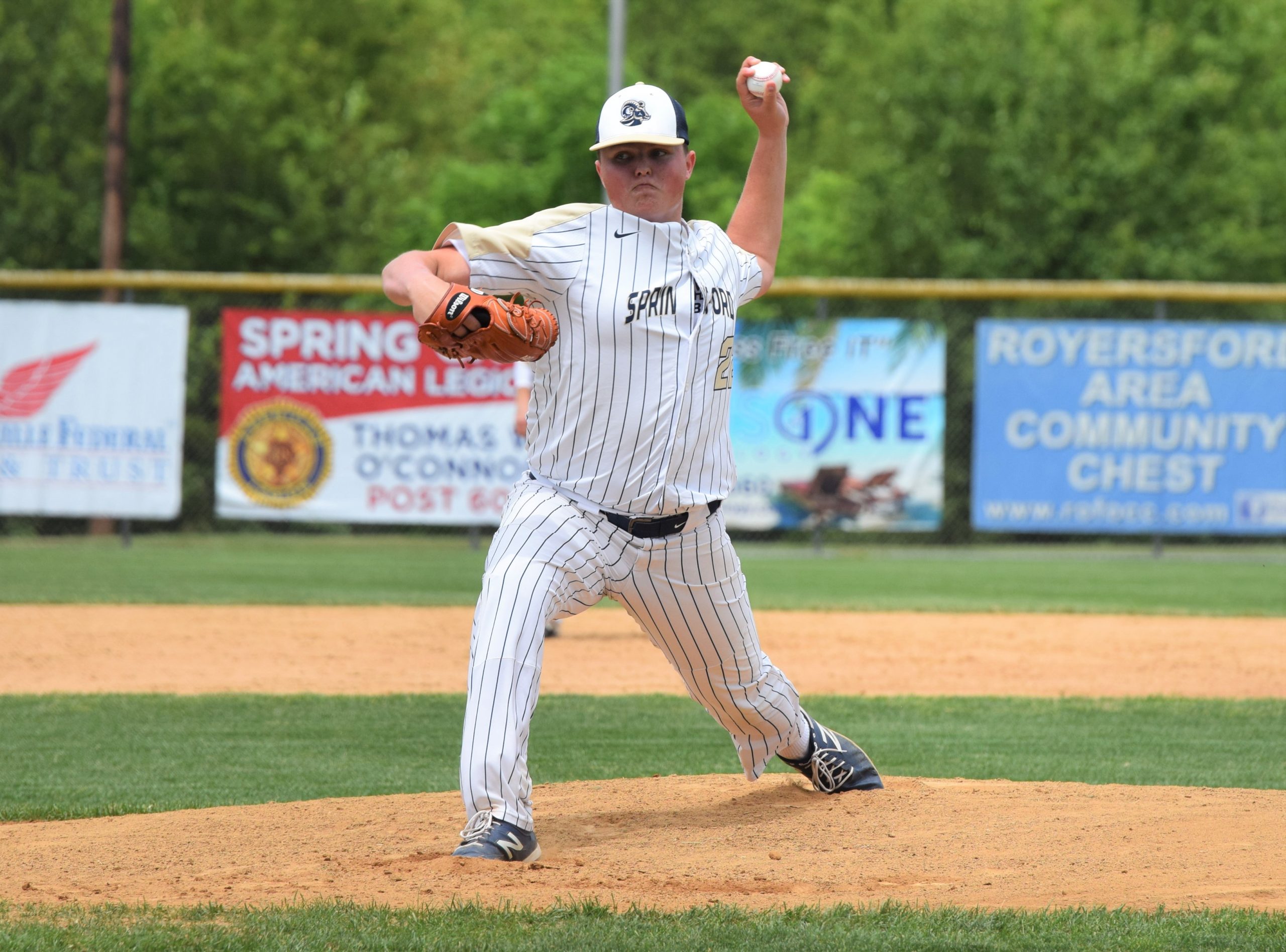 ROYERSFORD >> Jackson Malouf bounced back from a rough outing last week with the help of strong infield defense and Spring-Ford advanced to states with an 8-0 win over Garnet Valley in the District 1-6A fifth-place game Thursday afternoon at Ram Stadium.

The senior left-hander allowed only one hit and struck out nine in 6 2/3 innings before reaching the PIAA pitch limit. Aydan McNelly and Jack Kisela each had two hits for the No. 1 seed Rams (18-2), who will play the winner of the District 3 championship game between Wilson and Governor Mifflin in the opening round of the PIAA Tournament on Monday. C.J. Wood had the lone hit for the 18th-seeded Jaguars (11-10).

“I was very excited,” said Malouf, who allowed five runs in the first inning of an 8-2 loss to North Penn a week earlier in the quarterfinal round, forcing the Rams to win two playback games to keep their season going. “It was a redemption game for me. I was glad to have that challenge.”

The Rams scored one in the first when Jarrett Gordon singled, stole second and came home on a two-out hit through the left side by McNelly. They added two in the third on a double steal of second and home with Jake Books crossing the plate and a two-out grounded single through the middle by Kisela.

Then they broke the game open with four in the fourth as the Jaguars committed two errors and McNelly rapped a two-run single to right.

“It helps out,” Malouf said concerning the early run support. “Relieves the stress. We made some great plays in the field today that helped me out with the pitch count and kept up the intensity.”

Garnet Valley threatened in the third when the leadoff batter was hit by a pitch and Wood popped a single down the right field line with one out. But Malouf fanned the next batter and got a fly to right to retire the side.

“McNelly and Gordon made some really nice plays there,” said Harrison. “You always want to make the routine plays, but we made a few tough plays that helped the pitcher keep his pitch count down.”

“It’s just from preparation,” said McNelly. “We get a lot of groundballs in practice. We prepared well.”

The only Jaguar runners in the fourth through sixth innings came on a pair of errors and a hit batter and Malouf walked two in the seventh before Nick Ashley came on to get the final out on a fly to left.

“I was just hitting the glove and just let all my pitches work,” said Malouf. “We knew what this game meant for us. When we’re on, no one can beat us.”

“He pitched great,” said Garnet Valley coach Rudy Shiller. “He got up and he pounded the strike zone. Their team is very good. We shot ourselves in the foot that one inning with those errors.”

The Rams wound up with nine hits, including an RBI double by Dylan Ducharme in the sixth, and stole eight bases.

“We have one goal,” said McNelly. “That’s to win states. We’re ready. We’re hungry. We had a season taken away from us last year. We have a chip on our shoulder.”

Garnet Valley had won two playoff games before also losing in the quarterfinals and then stayed alive with a 4-3, nine-inning win over West Chester Henderson on Tuesday while the Rams scored six in the seventh for an 11-9 decision over Central Bucks South.

“Our guys played hard. I’m proud of the way we played,” said Shiller. “It’s been an emotional month. We had to win our last three games to make the playoffs. When you have a season like this, you remember them for a long time. We had a lot of guys who gave us some special memories.”

Meanwhile, the Rams move on to the final 16 teams in the state. They will face the District 3 champion in Monday’s PIAA Class 6A opening round.

“It’s great competition,” said Malouf. “We’ve faced some good arms throughout the year. We just have to believe in ourselves and go out there and do it.”

“All you can do is ask for an opportunity to get to the state tournament,” Harrison added. “Hopefully, we play our best ball the next week.”