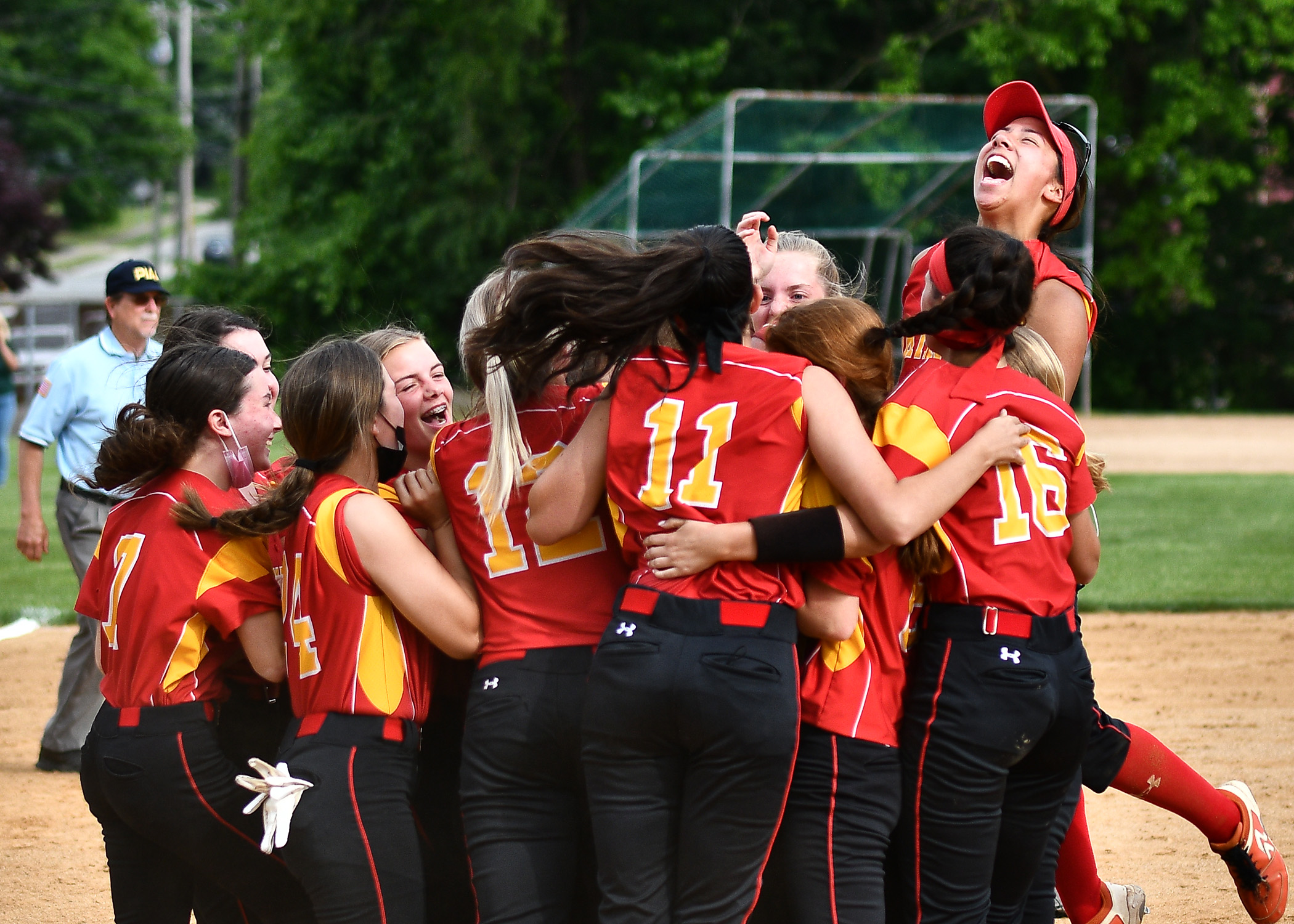 SPRINGFIELD — West Chester East scored the only run it would need in the top half of the first, as Jess Gomez threw a two-hit shutout to lead the No. 4 Vikings to a 3-0 victory over No. 2 Springfield in the District 1, Class 5A championship game.

It is the second straight title for the Vikings, who won the last title, pre-pandemic, two years ago. West Chester East will now move on to the PIAA State tourney, which gets underway Monday, June 7. The Vikings will play the fifth-place team from District 3, at a site and time to be determined.

“The past three games our defense has played really well, and Jess has pitched really well,” said Vikings’ coach Bobby Swier. “We just beat two really tough pitchers in back-to-bat games, so we are getting things done with the bat, too. I like our chances moving forward. Winning tough ones like our last three can only help get us prepared.”

Amanda Gomez (2 for 3, R) wasted no time getting things going for East, stroking a 0-1 fastball to right for a single, and then moved up to second on a sacrifice bunt from Rebecca Crump. Gomez then swiped third, and scored on an RBI groundout from Carey Werley.

“I know what my job is, and I knew what I had to do,” said Gomez. “Our intensity was there from the start, so it was big to get out to the early lead. I’m am just so happy we got back to the title game and were able to come up with a win.”

Springfield starter Sam Ciasulli settled in over the next four innings, allowing just two base hits, and working out of a bases loaded jam in the fifth. Ciasulli took the hard-luck loss, going all seven innings. She allowed three runs—two earned—on seven hits. She struck out four, and walked two.

“Gomez pitched a great game, and Sam pitched a great game,” said Springfield coach Todd Odgers. “West Chester just played a little better game than we did today. We didn’t hit the way we can, but they battled hard the whole way, just like they have all year. We just have to move on and focus on the state tournament starting Monday. We know the journey is not over and we have a lot further to go.”

Gomez has been on a tear all post season. In three games, she has allowed just two runs on six hits over 23 innings of work. In that span, Gomez has struck out 30 and walked just two. Gomez picked up the win in the circle with a complete game shut-out, allowing just two hits, while striking out nine and walking one.

“Whether we are up one, or up three, her approach and her demeanor doesn’t change,” said Swier. “She’s a captain for a reason. She is unflappable. And the defense has been really strong behind her, too.”

The outfield, in particular, made some spectacular plays. Arguably none was bigger than a play in the third inning. Still up by just one, Jill Condi led off for Springfield with a base hit. Ava Craddock was next, and lofted a little blooper to short left. Vikings left fielder Katie Douglass took off, and hauled it in after making a long run, then had the wherewithal to steady her feet and fire a strike to first to double off Condi. Condi’s hit was the only one for the Cougars until Jordan Galloway singled in the seventh.

“We didn’t hit the way we needed to hit today, or like we have all year,” said Odgers.”I am more than confident that come Monday, we’ll get our hitting back on track and make a run in the state tournament.”

Springfield’s Jill Condi is doubled off at first, as Abbey McCormick takes the throw (BILL RUDICK for MediaNews Group)

Springfield will advance to the first round of the state tournament as well, where they will face the champion from District 12.

The Vikings put the game away with a pair of runs in the sixth. Werley led off the inning, and took a ball to deep right center on the fenceless Springfield field, coming all the way around to third with a triple. Werley then scored on a sac fly off the bat of Allison Hill.

“This is so awesome, especially for the seniors who won it in 2019,” said Werley. “You’re never comfortable with a lead, but getting out by three made it a little easier to breathe. I came up looking to make good contact, and I did. I’m just really happy for all of us on the team right now.”

An error led to the Vikings’ final run. With two outs, Mia Kulp (1 for 2, R) appeared to be easily forced out at second, but the Cougars mishandled it, and Kulp was safe. Kulp then scored on an RBI single from Abbey McCormick.

“Moving into states, we’re playing really well as a team,” said Werley. “Everyone knows their job, and everyone is doing their job well. It’s a team game, and we’re playing together as a team. We’re all looking forward to states.”