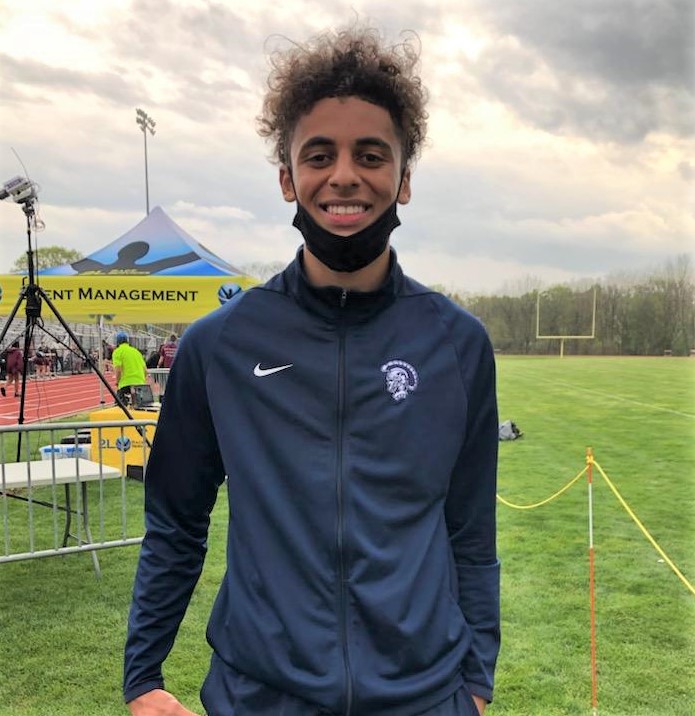 SHIPPENSBURG >> It was a definite upgrade for Darius Smallwood … in terms of medal color and performance.

Not to mention overall mood.

Smallwood had a banner outing at Shippensburg University Saturday. The Pottstown senior came to the PIAA Class AAA track and field championship meet with a strengthened sense of purpose following last weekend’s showing in the District 1-AAA competition, and he rode that drive to a championship finish in the boys 800.

The gold medal Smallwood earned literally outshone the bronze he got at districts. It was secured by a 1:51.91 run that not only was a personal best for him, but a new program record.

Combined with teammate Jahzeel Watson’s medal showing in the high jump, it placed the Pottstown boys program 23rd among the 82 schools listed in the AAA team standings. Its 10.75 team points were topped only by Norristown (18th, 12 points) among Pioneer Athletic Conference schools.

“I felt good out there,” Smallwood said. “My game plan, my mindset last week was to let others take the lead and try to pace them. That didn’t work, so today I took the lead and ran the whole way in front.

Smallwood effectively erased the old school mark of 1:52.6 for the event by more than a half-second. It was highlighted by a 54-second clocking on the first lap prior to a second-lap kick reminiscent of his finishes during cross country races in the fall, when he finished second in the district’s Class AA race at Tyler State Park in Newtown.

“My kick at the end, I had more energy,” he said. “I didn’t want anyone passing me.”

It effectively erased his memories of the district meet, where Smallwood ran a 1:55.05 in the final after earning the top seed.

“Darius came to practice willing to work,” Pottstown head coach Justin Gibbs noted. “He came out with his best performance.”

In an outing similar to last weekend’s District 1 competition, Watson reached the medal podium as part of a four-way tie for seventh place. He went 5-10 alongside North Penn’s Chris Bonsignore, Muhlenberg’s Tracey White and Belle Vernon’s Dane Anden, hitting the mark on his first attempt.

It came with the added condition of jumping indoors instead of outdoors … a situation of which he wasn’t aware until getting to the stadium.

“It required an adjustment,” Watson said. “I couldn’t wear spikes because it was indoors. I was hoping to do better, but it was as good as I thought it would be.”

“He had to adjust his whole game plan,” Gibbs added, “because he never jumped indoors. He had to do it on the fly, but he did a spectacular job.”

Smallwood’s showing qualifies him to compete in the Nationals meet, to be held June 30-July 4 in Oregon. It’s one he’s considering entering.

“I’m proud of both athletes,” Gibbs said. “They gave it their all.”

Jaden Brown capped his mastery of the 100-meter run in 2021  by winning the AAA boys 100-meter race.  The Norristown High junior, coming off a gold-medal run in last weekend’s District 1-AAA meet, asserted his superiority over the rest of Pennsylvania at its ultimate level of competition.Brown ran the race in 10.71 seconds, topping the likes of Seneca Valley’s Tyler Yurich and Boyertown’s Julian Saunders. His clocking, an improvement over the 10.93 he recorded in the preliminaries, was more than a half-second better than those of Yurich (10.76) and Saunders (10.77).

Dominik Brzozowski was one of two PAC competitors coming away from states with two medals. The Perkiomen Valley sophomore placed fifth in the 400 and sixth in the 200. His times in both races were personal bests even while competing in raw, rainy conditions.

“I feel I tend to do better in the cold,” he said. The assessment was supported by PV head coach Joe Petsko, who described Brzozowski as a “mudder.”

“He has a background playing soccer,” Petsko noted. “He ran well.”

From this showing in his first-ever state meet, Brzozowski plans to compete with the Ambler Olympic Club this summer. He figures to continue focusing on the races in which he excelled this spring.

“I’ll compete in the same events,” he said. “I’m going to try and run the 100 better. That was one of my weaker points.”

Just missing the medal stand were Upper Perkiomen’s Hunter Flack and Spring-Ford’s Alex Teufel, who were tied for ninth place in the pole vault.

In AAA girls’ competition, the area’s top performers were Maura Baker and Hannah Cassner. Baker, a Spring-Ford senior, was fourth in the shot put with a throw of 41-10 3/4 while Cassner, a senior from Daniel Boone, placed fourth in the javelin at 131-4.

“I was definitely happy with how I raced,” Zubey said. “It was a good end to my season. I was able to get out and be consistent.”

Another local medalist was Methacton’s Madi Eastmure, who finished seventh in the high jump at 5-2.

Congratulations Claire Zubey! 5th in the state in the AAA Girls 1600m! pic.twitter.com/8s5fXrshEg

At the PIAA Track and Field State Championships, Madi Eastmure placed 7th in the High Jump, clearing a height of 5’ 2”. Congrats Madi and Go Warriors! pic.twitter.com/fpVIvsUaWc