District 1-6A: Hetrick, Yesavage guide Boyertown to second round win over Quakertown 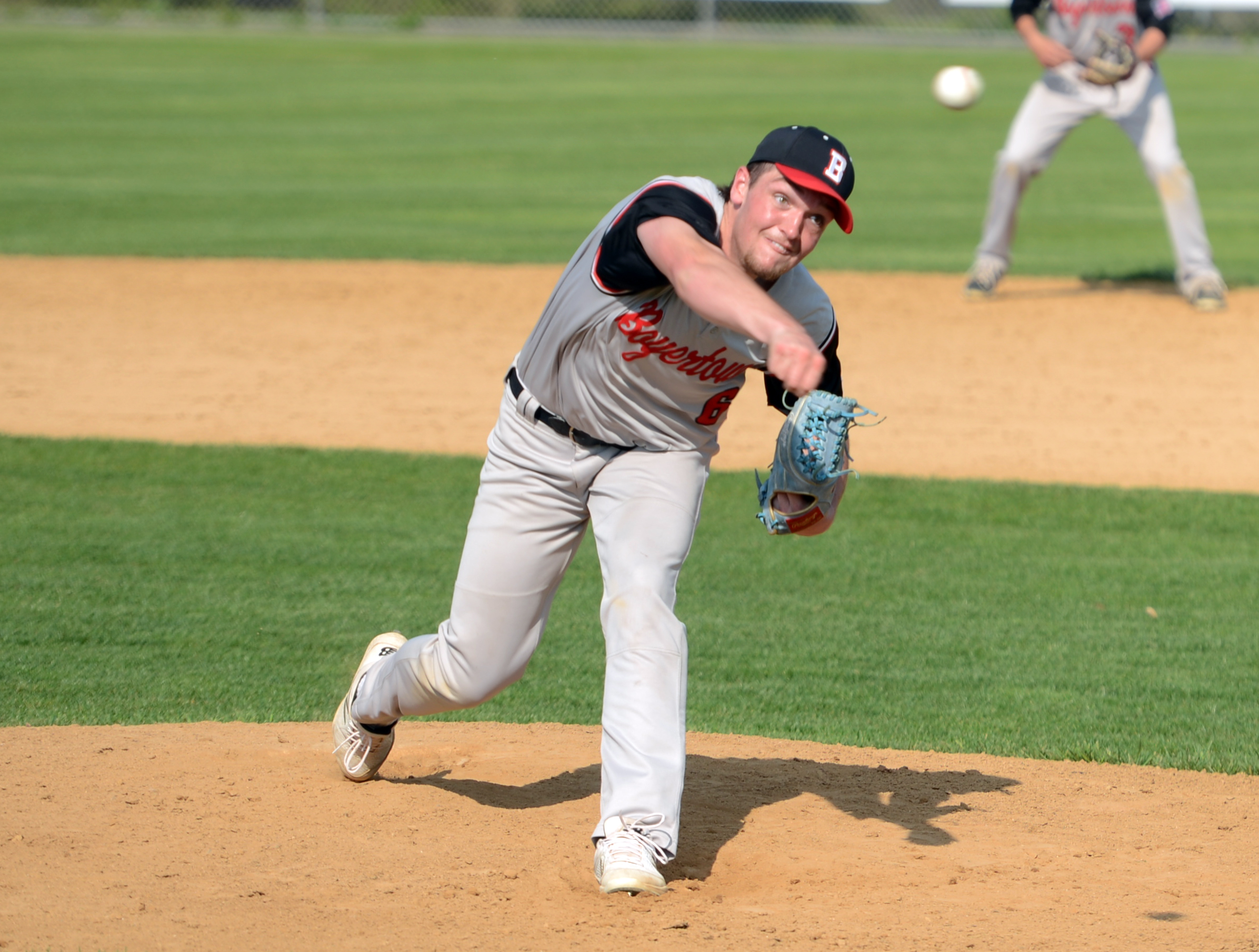 BOYERTOWN >> Trey Yesavage allowed only three hits and an unearned run in six innings and Evan Hetrick singled in the go-ahead run in the sixth for Boyertown in a 4-1 District 1-6A second round win over Quakertown Thursday afternoon at Bear Stadium.

The fifth-seeded Bears (14-3) advance to a quarterfinal Friday at 11 a.m. at fourth-seeded West Chester  Henderson, with the winner earning a berth in the PIAA Tournament.

Boyertown led 1-0 after scoring in the second and the 12th-seeded Panthers (9-7) tied it in the sixth. But Hetrick singled to right-center in the bottom of the inning for a 2-1 advantage and the Bears added two more on an infield hit and throwing error.

Ryan Maloney singled to open the Bear sixth and moved up on a sacrifice bunt by Jonathan Myers. Then Hetrick hit a fly to right with two out that dropped among three players, scoring pinch runner Tanner McCafferty.

“Just doing my job,” said Hetrick, who gave the hosts the early lead with a sacrifice fly to center. “Helping the team win any way I could. Even if the result was a weak flyball behind second, that works.”

“Sometimes you hit the ball hard, they catch it,” said Boyertown coach Todd Moyer. “Sometimes it falls in.”

Yesavage gave up a single to start the game to Ty Everitt, who stole second with two out. But Yesavage retired the side with a strikeout and did not allow another hit until Anthony Rostic and Peyton Kochel singled with two away in the sixth. The tying run scored on an infield error, but Yesavage struck out the next batter looking.

“Today he was up and down,” Moyer said concerning his senior right-hander. “He found it when he needed to under pressure because he’s the quality pitcher he is.”

“I was a little nervous, being our senior year and it could have been our last game,” said Yesavage (6-1), who walked two and struck out seven. “I cleared my head and did the best I could. I thought I did alright. Didn’t throw enough strikes, not efficient. Other than that, pretty solid.”

Boyertown scored in the second on a leadoff single through the left side by Yesavage, back-to-back bunt hits with one out by Myers and Cole Kratz and a fly to center by Hetrick. Then Luke Moser walked, but Panther starter Vinny Pelllegrini got out of the inning with a grounder to short.

The Bears threatened again in the third on a one-out double by Cole Hertzler, a walk and a double steal.  But the Panther sophomore right-hander again kept the lead at a run on a fly to left and a grounder to second.

Then Quakertown freshman Daniel Schwalm kept the game close with two hitless frames with four strikeouts and Trevor Hurst almost made it out the sixth before the Bears regained the lead.

“We’ve got to get the bats going for all three guys,” said Quakertown coach Jon Pallone. “You could see it in the guys’ eyes. They really wanted this game. I think it was a difficult season for everybody. We showed a lot of growth. It hurts. It was a good group of guys. We’re going to miss the seniors and all the work the put in.”

Quakertown put two men on in the seventh on a hit batter and a walk with one out, but Ethan Ferraro got the next two on a grounder to second and a strikeout to earn his third save of the season.

Henderson downed Avon Grove 4-1 on Wednesday to earn its quarterfinal berth. While the winner between the Bears and Warriors move on to states, the loser will need to win two straight playback games in order to claim the district’s fifth and final PIAA spot.

“Camaraderie is a big thing for us,” said junior outfielder Hetrick. “We’ve definitely grown as a team. We started out slow with the bats. We’ve just got to keep building.”