District 1-5A Softball: Phoenixville shuts down Chichester for first playoff win since 2013 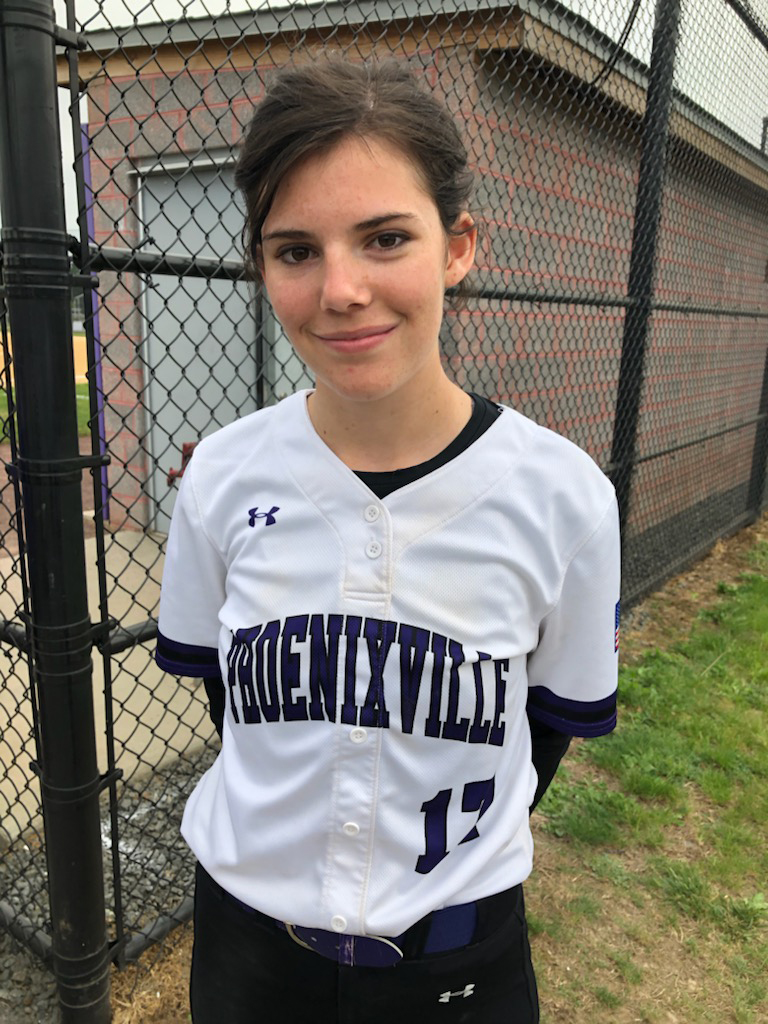 PHOENIXVILLE >> Claire Emplit described it as a “season of firsts.”

Thanks to its latest “first,” Phoenixville has extended its 2021 campaign for at least two more days.

The Phantoms opened play in the District 1 Class 5A playoffs Monday with a 10-0 romp over Chichester. It marks the first time the program has won a district playoff game since 2013, coming after a regular season during which they shared first place in the Pioneer Athletic Conference’s Frontier Division.

“Finishing a co-champions is big,” the Phantoms’ head coach said. “Getting this win under our belts gives us confidence.”

Arayna Ashlie gave the locals a decided confidence boost both on the mound and at the plate. She threw a one-hit shutout for five innings of the “mercy rule” game, yielding just two walks while racking up 10 strikeouts; at the plate, Ashlie contributed a two-run double to Phoenixville’s fourth-inning bataround, scoring one time on the day.

“The first (inning) is always the hardest,” she noted. “We also said if we’re going to lose, let it be the first one; otherwise, we’re going to win them all.”

Ashlie came at 11th-seeded Chichester (8-10) with a three-pitch menu of a rise, change-up and curve. She credited the rise with being the payoff pitch in her strikeout total, which was achieved by two stretches of fanning five batters — those runs featured her striking out the side in the second and fifth.

“She did a nice job on the mound,” Emplit said. “She’s a quality pitcher who works well with her catcher. And she throws so her fielders can catch the ball.”

Marisa Taylor’s game-opening double for Chichester was the only hit Ashlie yielded. The two walks, both to Ava Franz, were intentional.

Otherwise, the Eagles were unable to mount anything against the Phantoms. With that, they saw an abrupt end to a 2021 season that saw them make the most of less than ideal circumstances.

“We came out today with nine players,” head coach Marty Scapato said. “We’ve had low numbers, but the girls battled the whole way. They stepped up and did the things we needed to do to make it work.”

To its credit, Chichester kept it a two-run game through the first three innings. To their credit, the Phantoms gave ample support to Ashlie with their big fourth, which was fueled largely by four hits and a pair of walks.

Along with Ashlie, sixth-seeded Phoenixville (13-4) got a two-run double from Madison Buckwalter and an RBI single from Chloe Johns. Aubrie Breisblatt drove in another run with her groundout to shortstop.

“We had energy coming in. Great teammates,” Ashlie noted. “We got hyped up that inning.”

“Behind her (Ashlie), they play absolutely solid,” Emplit added. “They have her back. That creates cohesiveness.”

Phoenixville advances to Wednesday’s quarterfinal against third seed Marple Newtown. It’s vying to be one of the three clubs qualifying for the PIAA 5A playoffs out of the district.

Chichester, in the meantime, heads home for the year done in by Phoenixville’s outburst in the fourth.

“When we play as a team,” Scarpato noted, “we hung around. We’re hoping things look up.”

NOTES >> Gabby Capelli, pinch-running for Ashlie in the fourth, scored Phoenixville’s third run of the frame. … A prolonged discussion between the umpires and coaches occurred during the Phantoms’ third. The issue was, with runners on first and second, Kendall Brown hit a long fly to right that was fielded by the Eagles’ Makayla Armstrong. It was noted Phoenixville’s runner on first, who had gone past second before retreating to the bag, didn’t touch second on the way back. … Chichester’s starting pitcher, Ariana Davis, was replaced after the fourth inning by third-sacker Sydney Scarpato. Davis walked six and fanned three on the day.