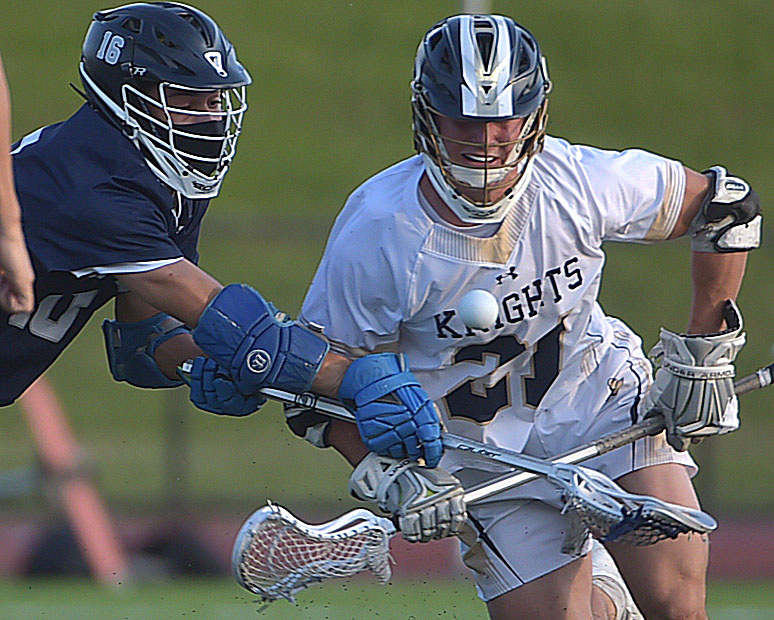 WESTTOWN >> West Chester Rustin senior Tucker Flynn won 22 of 23 faceoffs as the top seeded Golden Knights defeated No. 8 seed Springfield-Montco, 16-8, Wednesday in the opening round of the District 1 2A boys lacrosse tournament.

“Tucker’s won about 70 percent of his faceoffs for us this season,” said Rustin head coach Kevin Philibin. “When he gets hot like he did tonight, and keeps getting us possession, it’s huge, because our offense just needs possessions and we’re going to score.”

Flynn said, “The key to the faceoffs today was definitely the wingmen. We’d get the ball out, and it was just a scrum. Everyone who came in for us stepped up – when I faulted, they got the ground balls and really helped me out on the wings.”

Winning possession on nearly every faceoff, Rustin slowly built an 8-4 halftime lead, increasing it to 16-6 midway through the fourth quarter.

With the victory, Rustin (13-4), who has won its last five games, will now face No. 5 seed Penncrest May 25 in the District 1 2A semifinal. Penncrest defeated No. 4 seed Upper Moreland, 16-4, in its first round game Wednesday.

“Springfield had a very good game plan, and they had a very good goalie (junior Patrick McMahon) who made a ton of saves (13) against us,” said Philibin. “I think he kept them in it for the first half, and their offense kind of slowed it down against us, trying to limit our possessions, which I thought was a good plan.”

Just before the first quarter ended, Rustin took the lead for good. Seaman fired home a goal with 35 seconds left in the period to give the hosts a 3-2 lead, then following another victorious Flynn faceoff, Jackson took a nice feed in front of the net to score with 15 seconds left in the quarter.

Springfield continued to hang tough in the second quarter, and trailed by only two goals (6-4) when Spartan senior attack Luke Gozzard scored with just 34 seconds left before halftime.

Flynn won the subsequent faceoff, then carried the ball downfield and assisted on a goal by junior defensive long stick middie Zach Mankowski with just 23 seconds left in the half.

In the closing seconds of the second quarter, Seaman carried the ball for a sizable run to the net and fired in a shot with just one second left on the clock to give the hosts an 8-4 halftime lead. In the first half, the sharpshooting Seaman made three of his four shots attempted on goal.

Rustin built a 12-5 lead by the end of the third quarter on two goals by Murray, a mid-range scoring shot through a crowd by Seaman, and a goal from Jackson that was assisted by Seaman.

“Marek had a great game again for us,” said Philbin. “He and Owen Murray have been our leading scorers this season. … As the season has progressed, Jake [Jackson] has really grown into an offensive player, and has become another threat in our offense, which has been huge for us. He’s very good off ball, and he’s really grown into an on-ball dodger, and rides like a banshee.”

Early in the fourth quarter, two more goals by Seaman, one by Jackson and a tally from sophomore attack Antonio Santangelo gave the hosts a 16-6 lead with 5:50 to play. Meanwhile, Rustin’s defense kept Springfield at bay.

“I thought everyone [for us] played well defensively tonight,” said Philibin. “I thought [junior midfielder] Nick Burdumy played some really good short stick defense. Zach Mankowski did a really nice job as our long stick, getting out in transition. Drew Lanius also played well. We took some dumb penalties and ended up man down a bunch, which hurt us, but when we played 6-on-6 I thought we played really well.

“Matt Egre, one of our second-line midfielders, really stepped into a very nice role today, had an assist, played some great defense and made good plays on offense.”

“Teddy has stepped up in a tough situation after our starting goalie was injured earlier this season,” said Philibin. “He’s done everything we’ve asked of him. We’ve been very happy with the way he’s been playing.”

Rustin is looking forward to the district semifinal – which the Golden Knights need to win to qualify for the PIAA 2A state tourney – as a new opportunity.

“Coach Philibin always says that we set the bar after a win, and there’s no going back, we can only go higher from there,” said Flynn. “That’s something that we as a team take pride in, and it keeps us coming out, keeps us honest, keeps us coming out to practice. It always keeps us wanting more.”

Spartan head coach Hank Resch said, “We’ve competed strongly all year. We’ve made mistakes, we’re not quite there on some things, but our players never give up, they just keep plugging away. Our junior varsity team was very good this spring, so hopefully in a couple of years we’ll be somebody to be reckoned with.