Teets, Spring-Ford take down Great Valley 10-5 in District 1-3A first round 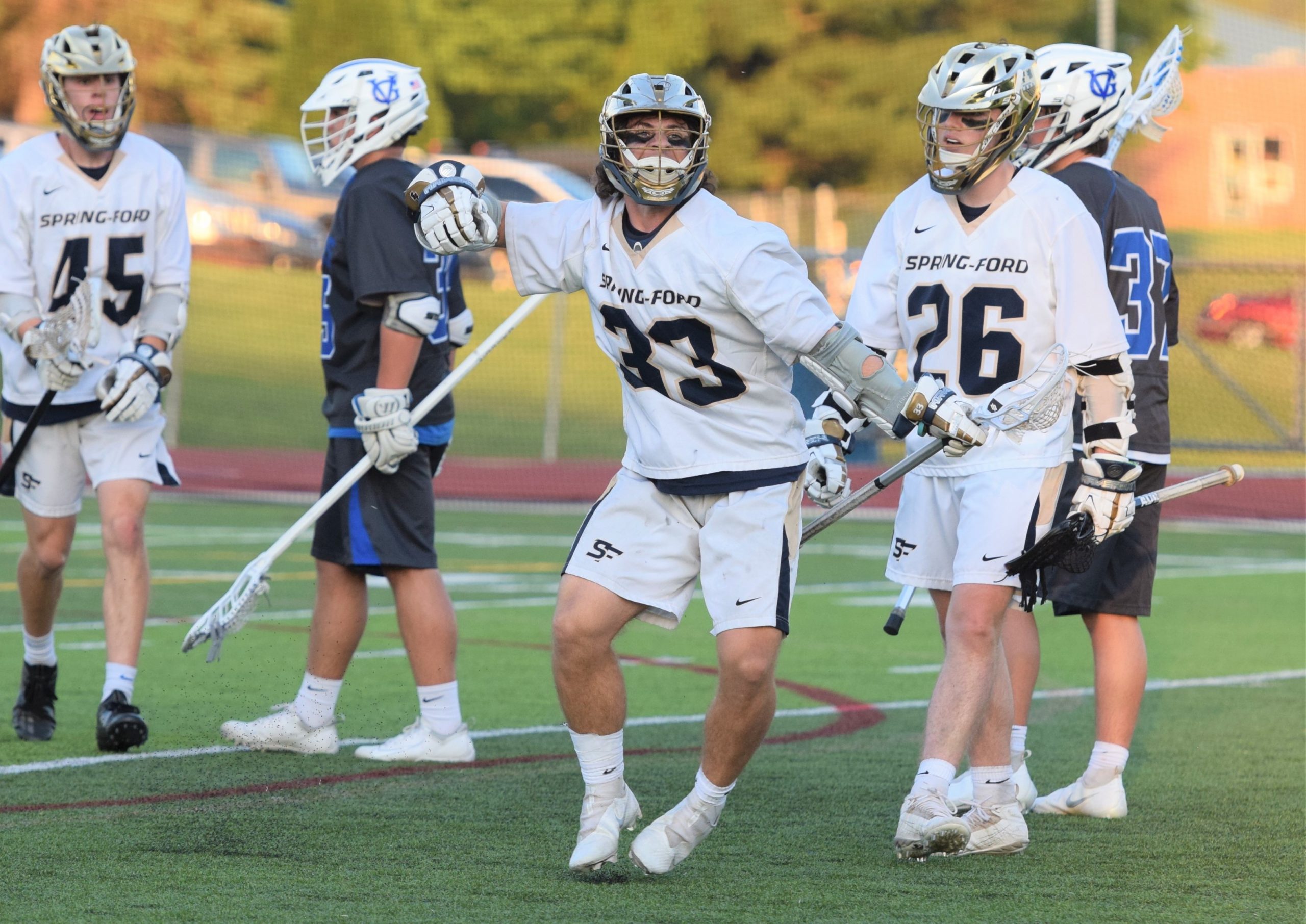 ROYERSFORD >> Nick Teets had to put on a show Tuesday night.

People – or at least one person – traveled a thousand miles to see him play.

“My grandmother (Barb Engro) came from Florida. Obviously with COVID it’s been hard so this is the first time I saw her in a year or so,” Teets said. “It was pretty cool, I was able to see her this morning and after that it was time to lock in on the game.”

Grandma was in for a treat.

The Spring-Ford senior attack starred with six goals and the Rams took charge in the second half to overtake Great Valley 10-5 in the first round of the District 1 Class 3A tournament at Coach McNelly Stadium.

No. 21 seed Great Valley led 3-2 at halftime but No. 12 Spring-Ford was sparked by a third-quarter hat trick from Teets that continued into a run of seven unanswered goals resulting in a 9-3 Rams advantage with 5:35 to play.

The Rams kept the Patriots off the scoreboard for more than 27 straight minutes between the second and fourth quarters, a badge of honor their defense.

“Throughout the season, we kick it up in the second half,” said S-F senior defenseman Cory Fiore. “Obviously we want to get that first half down, too, but really proud of this team because we had two quarters in a row without a goal. It’s a great feeling when we’re all connected and everybody’s working together, we’re talking and they can’t do anything about it and we’re able to keep getting the ball to our offense.”

Great Valley’s Ryan Harris takes a groundball and the stick of Spring-Ford’s Justin Wixted with him during the second half Tuesday. (Austin Hertzog – MNG)

Great Valley, which caps its season 8-9, made the District 1 playoffs for the first time in five seasons while getting standout play this season from junior middie Daniel Siton and junior goalie Nick Mort (12 saves).

“With 16 seniors there is a lot of senior leadership and all those guys, mostly in the way they carried themselves, left a positive mark on the program,” said head coach Ben Walton. “We took a step forward this year: we haven’t been in the playoffs in five years. I think we gave them all we had and that’s all we can ask for. It just wasn’t enough tonight.”

Longtime Spring-Ford coach Kevin Donnelly’s program runs like clockwork with consistently upperclassmen-driven lineups that have grown through the program. The cancellation of the 2020 season threw a wrench in the cycle and had at least something to do with the end of S-F’s run of nine straight Pioneer Athletic Conference championships.

“This is the season of ‘what I forget they don’t know.’ None of these guys except for one – Nick Teets – has ever been in a situation like this,” Donnelly said. “They haven’t played in districts, many haven’t even been on the sidelines. Maybe three were on the sidelines two years ago. We’re growing, but there’s gaps.”

Great Valley led 3-1 at the 9:10 mark of the second quarter and had control of the game with strong faceoff play from Andy Talone and a strong ride that consistently turned the Rams over on clears. On merit, the Patriots looked deserving of a greater than a one-goal halftime lead. They certainly got the Rams’ respect.

“Everybody that is in districts deserves to be in districts. We knew they were going to be a good opponent,” said Fiore. “They caught us a little off-guard, but we were able to step it up and realized that we were the better team on our home turf at the end of the day.”

After halftime, the game’s lone player with postseason experience made it count.

The game turned when Spring-Ford scored twice in a nine-second span, the second off the faceoff as Marchini found Teets for his third of the day. He made it four in the final minute of the third by muscling his way through a defender to open up a goal chance and finished while being hit by GV goalie Nick Mort for a sudden 5-3 lead.

At the same time, possession, groundballs and faceoffs started trending in the Rams’ direction.

“They went into a zone in the second half and our offense had trouble finding ways to get through that zone and make something happen. We tried a few sets, but it wasn’t enough,” said Walton. “Faceoffs went the other way in the second half – I thought their wings played very well – and groundballs overall. They were maximizing possessions, which we were in the first half as the score indicated.”

Inconsistency troubled the Patriots throughout the season and Tuesday’s wasn’t different.

“We’re pleased with what they were able to accomplish over the year,” Walton said. “But we had trouble putting four quarters of lacrosse together in any game. We didn’t play our best lacrosse for four quarters in a game this season, which we’re a little disappointed about. A lot of our games could have swung the other way if we could have put four together – I think this is one of them.”