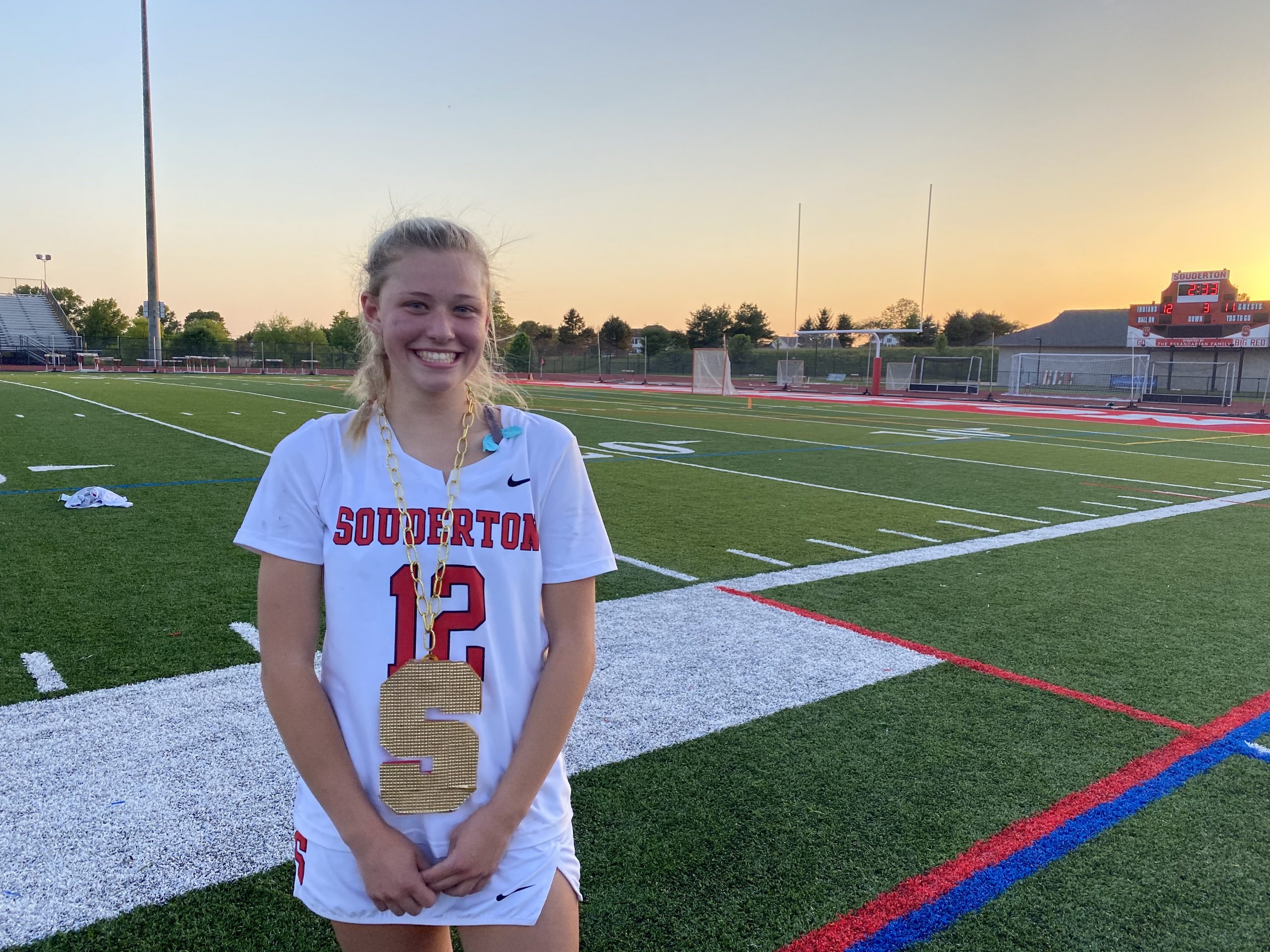 Souderton's Reiley Knize scored the game-winner in overtime as the Indians defeated Spring-Ford in the District 1-3A first round on Tuesday, May 18, 2021. (Mike Cabrey/MediaNews Group)

FRANCONIA >> Readying to take an 8-meter shot in overtime, Reiley Knize thought back on the advice given to her by Souderton girls lacrosse coach Claudia LaMarca.

“I just remembered my coach always telling me pick a spot,” Knize said. “And it was there.”

Knize raced in from the top of the arc and fired a shot into the top of the net at 2:33 in the extra session, sending the No. 16 seed Indians into elation and onto the second round of District 1-3A tournament with a 12-11 victory over No. 17 Spring-Ford Tuesday night.

“I felt like we deserved it a lot,” said Knize, a junior Bloomsburg commit.” We’ve been working really hard for this and it’s so exciting. Our first goal in the beginning of the season was make it to second round of playoffs because our team hasn’t gotten past first round in so long. So we were like our goal – second round and we made it happen today.”

GIRLS #LACROSSE: Final (OT) District 1-3A 1st round Souderton 12, Spring-Ford 11. Reiley Knize scores on an 8-meter shot at 2:33 in OT to send the Indians to the 2nd round. pic.twitter.com/rCb85FXKHG

Lauren Hallman gave Souderton an 11-10 lead with 29.5 seconds left in the second half but Spring-Ford won the ensuing draw control and Abbey Boyer pulled the Rams level by converting on an 8-meter shot with just 11.7 seconds remaining.

After another Spring-Ford draw win, Boyer was given an 8-meter shot with just 0.3 seconds in regulation but could not put the ball on goal.

“I feel like we let down sometimes and when they really want it that’s when they step forward,” Spring-Ford coach Kristi Holstein said. “And I think that they stepped up and kind of were like, ‘Enough’s enough – we need to get this together.’”

Overtime ended up being decided by the opening draw, Knize catching it and dashing down the left side, cutting to the middle and towards the net to receive the 8-meter opportunity that resulted in the game-winner.

“I know that once I usually get the draw, I can take breakaways down the field,” Knize said. “So I was like take my breakaway, I wasn’t even expecting to get that shooting space there, I was at least trying to open something up to make the pass or something and it was there and I took it and the shooting space was there.”

Souderton’s Reiley Knize (12) looks to get past Spring-Ford’s Alysia Collins (6) during their District 1-3A first round game on Tuesday, May 18, 2021. (Mike Cabrey/MediaNews Group)

Hallman finished with a game-high four goals, Knize recorded a hat trick while Clark Trowbridge scored twice for the Indians (13-6), who claimed their first district victory since 2015.

“I feel like it really came down to that last draw, it could of went either way,” LaMarca said. “Spring-Ford played an unbelievably full game. They came back and they fought and at the end of the day it literally came down to whoever won the draw and got possession. We were lucky enough to have that today.”

Souderton advances to visit top-seeded Conestoga in the second round Thursday. Conestoga has won the last three District 1-3A titles.

“Freshman year I wanted to play them so bad but we lost the first round so it’s like really excited cause I always wanted to play them,” Hallman said. “I just think it’s going to be really cool to be the underdog and just got to go in there with fire and hope for the best.”

Brenna Whiteside paced Spring-Ford (11-6) with three goals. Mac Maloney had two goals and three assists – all three going to Whiteside – while Boyer added two goals for the Rams, who were looking for their first District 1 victory since 2013.

“It was too back-and-forth for us,” Holstein said. “I think that we kind of let down a couple times. At times our overturns hurt us. I think that they played very hard, it just wasn’t one of our finest nights as far as on attack, how we normally work together, we weren’t executing it.”

The largest lead for either team Tuesday was three, Spring-Ford doing so by jumping out to a 3-0 lead – the first two goals by Whiteside before Madi Doyle’s scoring on an 8-meter shot at 10:55 in the opening half.

Ang Borisow put Big Red on the scoreboard 48 seconds later and Souderton’s attack began to find traction, ripping off an 6-1 run to take a 6-4 lead after a Knize strike at 14:14.

“I think they were overexciting within the first five minutes and I think the way we played showed that,” LaMarca said. “But as soon as we got our cool back and like you said we started winning possessions and showing that we can convert, I think that’s when we starting playing Souderton lacrosse. And it’s fun to watch.”

Spring-Ford’s Mac Maloney (24) looks to get down the sidelines past Soudeton’s Lexi Krebs (9) during their District 1-3A first round game on Tuesday, May 18, 2021. (Mike Cabrey/MediaNews Group)

Goals from Alyssa Mozi and Jordan Edwards 23 seconds apart had the Rams level with 1:24 left in the half but Isabel John scored off a Sydney Rohrbach assist with just 1.2 seconds to put Souderton up 7-6 at the break.

“I felt our momentum was picking up because someone would score and then we’d be like ‘OK, we got the next one,’” Hallman said. “I think we really kept pushing it.”

Rohrbach found Trowbridge to make it 8-6 at 20:43 in the second half while Knize’s goal assisted by Avery Farina had the Indians leading by three at 19:30.

Spring-Ford cut the margin to 9-8 at 13:52 within after goals from Maloney and Emma Sowers before Hallman pushed Souderton’s advantage back to two with 5:56 left.

Boyer’s tally had the Rams back within one at 3:02 while Maloney knotted things at 10 after scoring on an 8-meter shot at 1:46.