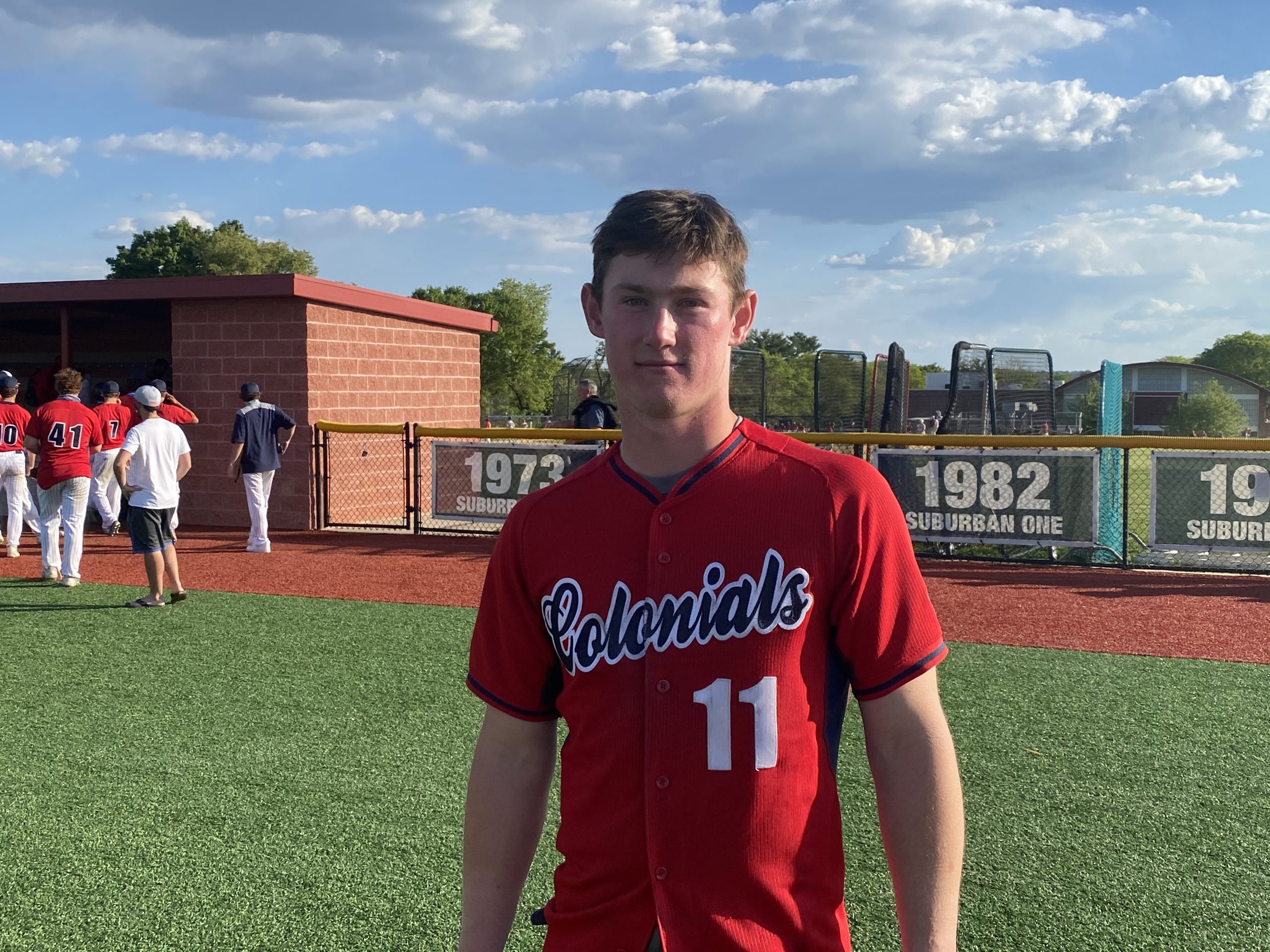 Plymouth Whitemarsh's Joe Jaconski started the bottom of the first inning with a home run as the Colonials defeated Abington 11-1 in five innings on Friday, May 14, 2021. (Mike Cabrey/MediaNews Group)

WHITEMARSH >> Joe Jaconski made an early statement that the Plymouth Whitemarsh baseball team was going to finish its week much better than the way the Colonials began it.

Leading off the bottom of the first inning, the North Carolina commit staked PW out to a quick 1-0 lead over visiting Abington by belting a homer run beyond the fence in right center field.

“I was working, I fouled two off to get into a 3-2 count, I was just looking for a pitch to hit and get on base and he came in with me,” Jaconski said. “And just put it where he pitched in.”

The Colonials added two more runs in the inning then in the second batted around to plate five more to go up 8-0.

After two straight losses, PW was not going to be handed a third, rolling past the Galloping Ghosts 11-1 in five innings to secure the outright Suburban One League Liberty Division title Friday afternoon.

#BASEBALL: Joe Jaconski gives @PWHSBaseball a 1-0 lead B1 with a leadoff home run to right center vs. Abington. pic.twitter.com/ILz62VXFZt

“As soon as (Jaconski) hit that we all had kind of a feeling that it was going to be a great game on our part,” Colonials left fielder Anthony Viola said. “I never had a sense that we were going to lose this game even before he hit the home run.”

Viola sealed the victory with a walk-off two-run single in the bottom of the fifth to finish 2-for-4 with two RBIs and a run scored. Luke Gartland went 2-for-3 with an RBI and scored twice as Plymouth Whitemarsh (16-2, 13-2 division) claimed its second straight SOL titles after winning the American Conference in 2019.

“It means a lot because last year was a year we had a great group of guys and it stinks for them who didn’t get the year,” Jaconski said. “So we’re kind of playing for them also at this point because we had a good chance last year. We were proud about ourselves and I think we were going to come in and be pretty good last year but we didn’t get to do it.”

The Colonials came into the week a perfect 15-0 but lost to Hatboro-Horsham in eight innings Monday then fell to red-hot Upper Dublin Wednesday. Against Abington, Jaconski’s homer was the only one among the PW’s nine hit that went for extra bases but the home side also drew nine walks, including three straight free passes to begin the bottom of the second.

“Winning a league title cures the rest of the week pretty well,” Colonials coach Chris Manero said. “Look, it’s the culmination of a lot. We know we had a really good year. Started the season 15-0 is why we had a chance to do this today and you don’t want to lose any games but the ability to bounce back and I said we really didn’t play well on Wednesday so to come out and probably play one of our best games of the year it’s a real testament to these guys and their focus.”

Abington (11-6, 11-4) was just a game back of PW in the SOL Liberty standings, having won two straight and nine of its past 10 after an 11-inning victory over Hatboro-Horsham Wednesday.

The Galloping Ghosts threatened in the top of the first – Colin Hamsher starting the game with a double to left then going to third as Alex Dardaris reached on a one-out error. Dardaris stole second to put two runners in scoring position but PW starting pitcher Alex Wilkie-Viscio got a strikeout looking and a groundout to work out of the jam.

Dardaris put Abington on the scoreboard in the top of the third with a two-out solo home run to left but that only cut PW’s lead to 8-1. The Colonials scored a run in the fourth on Jesse Jaconski’s RBI sacrifice fly while in the fifth Viola drove in the final two runs with his bases-loaded base hit through the left side.

“It felt better than usual,” said Viola of his walk-off hit. “I’ve been in kind of a slump the whole season, so kind of a 2-for-4 game, a couple RBIs and the game-winning hit to clinch the league title feels great.”

Wilkie-Viscio threw all five innings in earning the win, the right-hander giving up one run – earned – on five hits, struck out five and did not allow a walk.

“Our starting pitchers are all very different and he has the ability to when he comes in and places the ball when he wants to, when he can locate, he can be pretty tough,” said Manero of Wilkie-Viscio. “He doesn’t throw the hardest but he mixes his pitches up really well, keep guys off balance and he just threw a ton of strikes today and that was the key.”

Abington, sixth in the District 1-6A rankings, ends its regular season on the road against Quakertown 3:45 p.m. Tuesday. Plymouth Whitemarsh, third in 6A, has two games remaining – at Wissahickon 3:45 p.m. Tuesday and a nonleague road game against Radnor 4 p.m. Wednesday.

“This week was a rough one,” Jaconski said. “We struggled early and we came back out yesterday, Thursday, had a very, very good practice and I think we all had a good feeling we were going to come out here and get the job done.”

After Joe Jaconski’s homer, the Colonials loaded the bases with no outs in their half of the first on three straight singles from Jesse Jaconski, Luke Caucci and Miller Miller. A force out at home on a fielder’s choice and a fly out had Abington on the verge of getting out of the inning down just a run but Jack Hildebrand was hit by a pitch and Joe Redmond followed with a walk to make it 3-0 PW.

Joe Jaconski began the bottom of the second by drawing the first of his three walks while Jesse Jaconski and Caucci also walked to load the bases. Joe Jaconski came home on a passed ball for a 4-0 lead.

A Miller RBI fielder’s choice scored Jess Jaconski then on the next at-bat Gartland knocked an RBI single up the middle to put the Colonials up six.

Dominic DiCiurcio’s infield single and a Jack Hildebrand walk loaded the bases again with one out. A Redmond walk made it 7-0 while a two-out Joe Jaconski walk brought in PW’s eighth run.

Jesse Jaconski gave PW an eight-run advantage in the fourth as his sac fly to center plated Viola, who led  off the bottom of the inning with a single to right.

Gartland opened the bottom of the fifth with a single while back-to-back walks by DiCiurcio and Hildebrand loaded the bases. After a fly out to right, Viola clinched the game and the division crown with his two-RBI single.

“It means everything,” Viola said. “I felt like we were going to have a great team last year and it all went downhill but to come out this year and to clinch a league title before the season even ends, it feels great.”